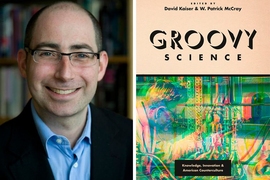 ↓ Download Image
Caption: “Groovy Science,” from the University of Chicago Press, was co-edited by David Kaiser (pictured), head of MIT’s Program in Science, Technology, and Society.

When science met the counterculture in the 1960s and 1970s, unusual things happened. The medical researcher John Lilly studied whether dolphins could learn human language. Would-be astronomer Immanuel Velikovsky made widely read claims that a comet had caused biblical disasters. But other projects have had lasting legacies: Artisanal food makers founded organic farms, designers built communes with sustainable housing, and materials scientists even revolutionized surfboard manufacturing. All this and more is featured in “Groovy Science,” a new book from the University of Chicago Press featuring essays from 17 scholars about science’s countercultural turn. The volume was co-edited by David Kaiser, head of MIT’s Program in Science, Technology, and Society, whose own 2011 book, “How the Hippies Saved Physics,” detailed the counterculture’s influence on once-marginal physics questions such as entanglement. (The other co-editor, W. Patrick McCray, is an historian at the University of California at Santa Barbara.) MIT News donned a wide-collar shirt and sat down with Kaiser to talk about “Groovy Science.”

Q: What is the conventional wisdom about science you are trying to revise?

A: We want to address a common stereotype that dates from the time period itself, which is that the American youth movement, the hippies or counterculture, was reacting strongly against science and technology, or even the entire Western intellectual tradition of reason, as a symbol of all that should be overturned. In fact, many of them were enamored of science and technology, some of them were working scientists, and some were patrons of science. This picture of fear and revulsion is wrong.

We also see things that have a surprisingly psychedelic past. This includes certain strains of sustainability, design, and manufacture, notions of socially responsible engineering, and artisanal food. This stuff didn’t start from scratch in 1968 and didn’t end on a dime in 1982.

Q: The post-war era is known for industrial-scale “Big Science,” in defense research, particle physics, space exploration, and more. But this book features a lot of “small” science, from labs, early start-ups, farms, and communes. How consciously were scientists reacting against “Big Science”?

A: It was almost an ideological shift. These folks were rejecting not science itself but what many had come to consider a depersonalized, militarized approach to the control of nature. Yet even the most colorful examples of groovy science had specific debts to the High Cold War, the first quarter-century after World War II, the era of “Big Science.” John Lilly was famous for woolly-sounding experiments on interspecies communication [with dolphins] and sensory deprivation and LSD. It’s easy to see why that fits in a book called “Groovy Science,” but Lilly was coming directly out of military-industrial research, from Korean War-era worries about brainwashing and the Soviet Menace. The chapter on the surfboard revolution takes us far away from Dr. Strangelove — we’re not talking about nuclear strategy or bombers — but this happened in Southern California for a reason, because there were a lot of people in defense and aerospace with experience in materials science, which shaped even a leisure/counterculture activity such as surfing.

Q: Surfing is largely a middle-class activity. And the U.S. had a postwar, middle-class economic boom into the late 1960s or early 1970s. How much “groovy science” was middle-class science, serving middle-class pursuits, among people who could afford to drop out?

A: The affluence question was on the minds of many of these people. But the era of so-called stagflation [starting in the early 1970s] was highly disruptive. And that did inspire efforts for what we now call sustainability. What would it take to avoid the trap of consumerism and planned obsolescence? Energy and the environment were getting a huge reboot of attention among tuned-in young people in this time period.

Many of these people really thought the revolution was nigh. They thought the basic structure of society was about to come in for enormous change, and could imagine new roles for themselves and the work they loved doing. Their horizons seemed broader, in a very hopeful way.

Q: You’ve written about the counterculture and physics before, so what new things did you learn from your colleagues here?

A: You start seeing commonalities across fields that seem distinct, from psychology to engineering, public health, medical practices, and ecology. There is a common theme of a “conversion narrative,” a personal quest for authenticity [among scientists]. You might call it a kind of secular spiritualism.

You also start seeing the role of the guru or charismatic figure. Some of them were iconic countercultural figures. Psychologist Timothy Leary [who advocated using psychedelic drugs in therapy] was enamored of everything from quantum physics to aerospace engineering. He got plenty of things wrong and said outlandish things, but he wasn’t rejecting the legacy of science. He was trying to push it toward broader horizons. A lot of people associated with health and medicine had earnest questions about the nature of consciousness. They might make us chuckle today, but it was driven by a desire to know.

Q: One chapter of this book is about the psychologist Abraham Maslow, whose work on “self-actualization” was massively popular, but even as he visited the Esalen Institute in Big Sur, California, he seemed wary of the counterculture. Timothy Leary aside, doesn’t it seem like a lot of famous 1960s figures were not really into 1960s culture?

A: I agree. Maslow was fascinated enough to try to engage directly with students, at Brandeis, in California, and across the country. But he maintained a strong ambivalence, even as much of his writing was adopted and celebrated by younger people. Immanuel Velikovsky was temperamentally a polar opposite from many people who considered themselves his acolytes. He was a very bookish Eastern European émigré who pursued unusual ideas, but with a 19th century European scholar’s identity in mind, even as he became an unintentional pied piper for college kids from across the country.

Q: It’s great reading about the 1960s and 1970s, but does this book tell us anything we can apply to science and culture today?

A: I would like the book to inspire discussion about broader cultural attitudes toward science and technology. We’re living through a remarkably challenging period today about the place of scientific expertise in policy debates. It’s easy for us to dismiss entire swaths of the population as antiscience. In some instances that might be accurate, but we can move away from a simple binary [division] of “us” and “them.” The ways scientific expertise can take shape within our culture can be messy, and can change.

Adrift in a sea of change