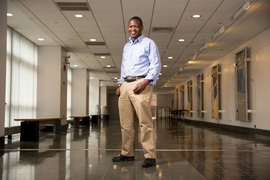 ↓ Download Image
Caption: “The question I was beginning to ask was: How is it that Africa is not accounted for in technology studies?” says Clapperton Mavhunga. “How is it we are only accounted for in our social history and our suffering as victims? That’s when this inquiry that took me to MIT began.”
Credits: Photo: Bryce Vickmark 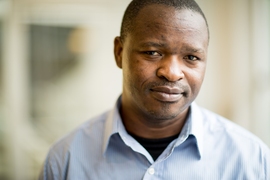 ↓ Download Image
Caption: “The question I was beginning to ask was: How is it that Africa is not accounted for in technology studies?” says Clapperton Mavhunga. “How is it we are only accounted for in our social history and our suffering as victims? That’s when this inquiry that took me to MIT began.”

Caption:
“The question I was beginning to ask was: How is it that Africa is not accounted for in technology studies?” says Clapperton Mavhunga. “How is it we are only accounted for in our social history and our suffering as victims? That’s when this inquiry that took me to MIT began.”
Credits:
Photo: Bryce Vickmark

In 1978, when Clapperton Mavhunga turned six, he had to walk several miles each way to and from his school in rural Zimbabwe. It was not his biggest problem.

Zimbabwe’s war for independence was rumbling on, as it had intermittently since the 1960s. Mavhunga’s father, Peter, who was involved with the Zimbabwe African National Liberation Army as a local chairperson organizing logistics for the guerrillas, fled to the regional capital of Marondera to stay safe. Much of the rest of the family — Mavhunga’s mother and five children — was left to farm to feed themselves. Families led by women had become a trend in rural Zimbabwe at the time.

“I saw the powerful role of women who pretty much carried the burden of the liberation struggle on their shoulders,” Mavhunga recollects. “We had to survive. We survived by farming, going to the wetlands garden, tilling, spending the whole day there. And we had to grow crops on the fields. We had to keep the cattle, which wasn’t much — three or four.”

And yet Mavhunga, now an associate professor in MIT’s Program in Science, Technology, and Society, does not recall this period solely as a time of turmoil.

“We were happy,” Mavhunga says. “We were very happy until the next burst of gunfire, then we ran. As a family, we pulled together. As a community, we were united. I had friends, we had spaces where we would have fun.” Moreover, he adds: “You can still innovate under extreme duress.”

The experience of being resilient and resourceful in trying circumstances has stayed with Mavhunga. Indeed, it has formed part of his scholarly outlook. Mavhunga is a historian who contends that Africa has produced more science and technology than it is given credit for. Outsiders, he thinks, either don’t know where to look for Africa’s uses of technology or simply assume they do not exist in a place they too often view as miserable and enfeebled. Africans too, in Mavhunga’s view, have bought into this uncritical narrative too easily.

By the time he was in college, Mavhunga became interested in writing a positive, inspiring, yet analytical narrative of Africa as a creative, technologically oriented place.

“The question I was beginning to ask was: How is it that Africa is not accounted for in technology studies?” says Mavhunga. “How is it we are only accounted for in our social history and our suffering as victims? That’s when this inquiry that took me to MIT began.”

That inquiry is ongoing. Mavhunga’s first book, “Transient Workspaces: Technologies of Everyday Innovation in Zimbabwe” (MIT Press, 2014), examined indigenous hunting practices as a space where the subject of African science, technology, and innovation is opened up.

His second book, on the role of deadly insects in society — specifically the tsetse fly — is under contract with the MIT Press. It examines how the colonial state in Zimbabwe built its anti-tsetse science and policy on pre-existing African knowledge and practices.

For his scholarship and teaching, Mavhunga was awarded tenure at MIT last year.

Growing up, Mavhunga lived mostly in the rural countryside of Chihota in the Zimbabwean province of Mashonaland East, before enrolling at the University of Zimbabwe. His brother Roy was his greatest inspiration.

“He was pretty much the one I looked up to,” Mavhunga says. “He would carry me on his shoulders everywhere he went.”

To be sure, Mavhunga notes that being “raised in a war situation” forced him to mature quickly in some ways. “When you are born in that atmosphere your mind grows very quickly,” he says.

By the early 1980s, the war had ended with Zimbabwean liberation, and in time Mavhunga graduated from high school. He credits the support of his school’s Australian headmaster, Sedar Pavia, whom he calls “a very special person in my heart.” In 1996, Mavhunga graduated from the University of Zimbabwe, where he began focusing on not just African history but the history of science and technology. He received an MA from the University of Witwatersrand in South Africa in 2000 and his PhD in history with a focus on African history and science, technology, and society, from the University of Michigan in 2008. That same year, he joined the MIT faculty.

How knowledge is produced

Mavhunga’s body of work involves a couple of central themes. One, that Africans have developed more technological know-how than Westerners realize, covers areas from chemistry and medicine to agriculture and even steel production. Compared with Western technology, some African technology may be superior for its intended purposes. Unlike guns, for example, Zimbabwean poison-tipped arrows can be used without making noise, as Mavhunga notes.

A second key point is that the development of this knowledge is often disguised to outsiders by the presence of spiritual and other social practices. Technology in Africa has historically been anchored in, and intended to achieve, spirituality. Yet while hunting in Zimbabwe, for instance, may be accompanied by many traditions and spiritual rituals, that doesn’t mean Zimbabweans have lacked a sophisticated knowledge of tool-making and poisons. Simply isolating the “technical” elements in a tool misses the driving forces behind the production of technology and innovation in Africa.

Correcting this misperception is a particular focus of the book on the responses to the tsetse fly that Mavhunga is currently completing.

“I’m contending that without fully taking stock and grappling seriously with the spiritual, it’s impossible to understand how African knowledge comes to be produced,” Mavhunga says. And even relatively sympathetic observers of Africa, he asserts, have not grasped this point.

“People thought there was no science, because they could not find the scientist or engineer,” Mavhunga says. And yet, he points out, in the 19th and 20th centuries, Western universities and governments sent one scientific expedition after another to collect and bring back plant samples and medicinal knowledge gathered from spiritual healers.

In a similar vein, Mavhunga aims in his teaching to impress upon students that technology crops up in many circumstances around the globe — not just in Silicon Valley or labs where it will quickly be deployed in the service of startup or behemoth companies.

“We already have the world represented on campus,” Mavhunga observes. “We have to make sure [students] take advantage of these multiperspectival, multicultural understandings of the subject. Part of what I try to do, both in my writing and in my classes, is to disturb students’ thinking, what they already know — to ask them to take a step back from the banal view of what technology is, what science is, what innovation is.”

It is a weighty task, but one Mavhunga relishes as someone who thinks he can chip away at centuries of misleading ideas and stereotypes, one book or one class at a time.

“I recognize that need to tell a positive [story], but one which is not forgetful of the bad things that have happened to Africa — slavery, colonialism, own goals scored. But one that builds a positive [feeling] around Africa.”