MLK Luncheon speaker describes “dealing with scars nobody can see” 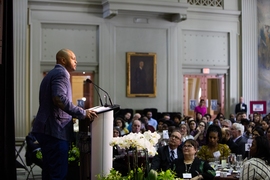 ↓ Download Image
Caption: Kevin Richardson, one of the Central Park Five, who have all been exonerated of their unjust conviction, gives the keynote speech at this year’s annual MIT Martin Luther King luncheon.
Credits: All images: Jake Belcher 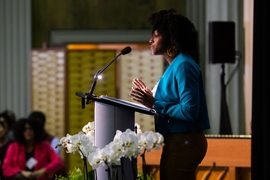 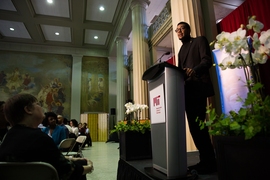 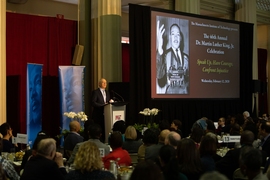 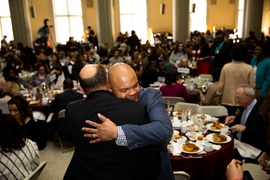 ↓ Download Image
Caption: Keynote speaker Kevin Richardson is greeted by a member of the audience after his speech.
Credits: All images: Jake Belcher 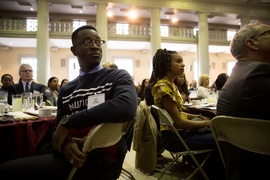 Caption:
Kevin Richardson, one of the Central Park Five, who have all been exonerated of their unjust conviction, gives the keynote speech at this year’s annual MIT Martin Luther King luncheon.
Credits:
All images: Jake Belcher

Caption:
Candace Ross, a graduate student in computer science, shares her thoughts on the legacy of Dr. King.
Credits:
All images: Jake Belcher

Caption:
Keynote speaker Kevin Richardson is greeted by a member of the audience after his speech.
Credits:
All images: Jake Belcher

One evening in 1989, a 14-year-old Kevin Richardson headed from his home in Harlem into New York City’s Central Park to play basketball with some friends. Little did he know when he walked into that park that his life’s dreams would be shattered that evening, and that he would soon be spending seven years in prison for a crime that, as has since been proven in court, he had nothing to do with.

He spent years in a struggle to prove his innocence, along with the four other teenagers swept up by police that night who became known as the “Central Park Five.” They were accused of a horrific rape that took place that night, for which another man would, years later, eventually confess.

“I still deal with that every day,” Richardson told an MIT audience Wednesday. “We have to deal with scars that nobody can see.”

Now, legally cleared of the crime, happily married and the father of two daughters, Richardson has turned his own horrific experiences into the basis for a new calling: speaking out and organizing against injustices in the criminal justice system, which disproportionately affect people of color and particularly black men, and helping to advocate for others who, like him and his falsely accused “brothers,” are seeking to clear their names and prove their innocence.

Richardson, who is now 45, gave the keynote speech at this year’s annual MIT Martin Luther King Jr. celebration luncheon. He described the devastating effects of losing much of his youth to an unjust arrest and imprisonment, and his choice to turn that personal hardship into a tale of hope and strength for others who suffer similar injustices.

Despite the horrors of incarceration, which he said were particularly bad because being labeled as a rapist is one of the worst things for a prisoner, he refused an opportunity that might have led to his parole after five years. Despite being a model prisoner and earning a college degree in prison, he said to be released he would have had to admit to the crime he didn’t commit. But he kept going, always believing “there is a light at the end of the tunnel.”

Richardson gave much credit for the inner strength that helped him to endure those years to his mother and to his religious faith — although he says that faith was temporarily broken after his unjust arrest, when he couldn’t understand “why would God do this to me.” But years later, he came to feel that this was all leading him to the path that he is pursuing today, advocating justice for others: “When I got older I realized I was destined to be here. ... I was molded and sculpted to be what I am today — to speak for justice, not just for myself, not just for people of color, but for everyone.”

“I have to become a voice for the voiceless,” he said.

Introducing Richardson at the luncheon, MIT President L. Rafael Reif described him as “an individual who has suffered crushing injustice, and yet has found the courage to speak out for systemic change.”

Reif said, “He has transformed this terrible injustice into a relentless commitment to drive positive change: to promote DNA evidence as a way to help people trapped by wrongful convictions, and to reform our criminal justice system, for the good of all.”

Reif also used the occasion of the luncheon to announce that MIT has just hired a new Institute Community and Equity Officer, John H. Dozier, who has been the chief diversity officer and senior associate provost for inclusion at the University of South Carolina.

“To succeed in our mission at MIT, we urgently need to make our community work for everyone,” Reif said. “I hope you share my optimism and excitement about what we can achieve with John’s collaborative leadership.”

The MLK celebration also featured remarks from two students, an undergraduate and a graduate student. Undergraduate Kelvin Green spoke of “how we challenge ourselves day in and day out to be committed to justice.”

He said, “I stand before you today with a heart filled with optimism and hope,” despite the great problems and challenges facing the world today. “Optimistic because all the power that’s needed to make change is in this room right now,” he said to the packed crowd at MIT’s Morss Hall. “I’m here to tell you today that each of you has the power to create the world brother King sacrificed his life for.”

He said “no single person can do anything sustainable. But there are enough people in this room to make MIT a beacon of light in a world that is getting darker and darker. … So I encourage all my peers in the fight for a just world to keep fighting. Keep writing. Keep drawing. Keep dancing. Keep singing. Keep protesting. Keep speaking. Keep going. Our art and our protest is how we keep our community free. … It is how we have courage, speak up, and confront injustice.” (Read Green's full remarks here).

Candace Ross, a graduate student in electrical engineering and computer science, cautioned against empty words of support that are not matched by action. While the words of King, saying that hate cannot drive out hate, are powerful, they can be seen as abstract, she said. “It lets us say we value diverse views, while not having any diverse bodies in the room.”

Ross said that from talking to her grandparents, she knows that the face of American racism has changed over the years but is still powerful. For example, she said, “government cannot in theory disenfranchise voters on the basis of race; this disenfranchisement happens in practice through mass incarceration and permanent removal of voter rights.” That’s among the many ongoing issues Ross said she and other activist students are trying to find ways to address.

President Reif cited Ross’s comments about the “courageous labor” being carried out by students every day, and hailed “the selfless, unseen work that so many students do to support one another and to try to build a better MIT.”

He added, “In the midst of such labor, it can be hard to see or appreciate how much progress you are creating. So I simply want to say — to Candace, to Kelvin, and to everyone here: Thank you for all you do — and please know that you are making a lasting difference!”