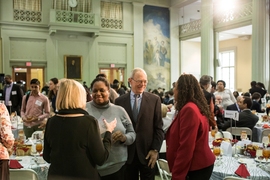 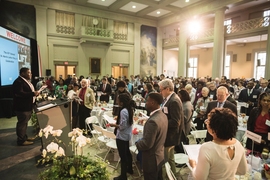 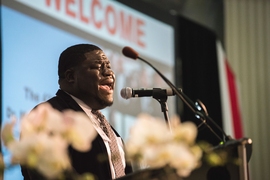 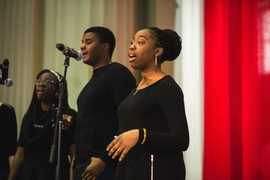 ↓ Download Image
Caption: The event opened with a performance by MIT’s Gospel Choir. 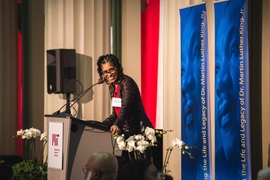 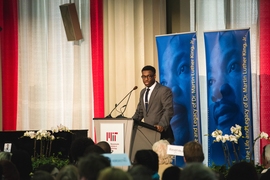 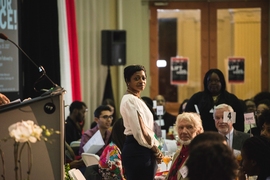 ↓ Download Image
Caption: The theme of the celebration, was “Lift your voice!” 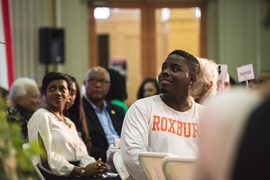 ↓ Download Image
Caption: “We scientists are agents of change,” Ericsson said in her keynote speech. 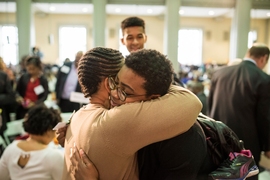 ↓ Download Image
Caption: “We must work together across the differences of skin color, gender, and religion. … We are making this journey together, in a drive to make this world a better place,” Ericsson said.

Caption:
The event opened with a performance by MIT’s Gospel Choir.

Caption:
Senior Rasheed Auguste offered reflections on King’s legacy and proposed a three-step process for addressing injustice in the world.

Caption:
The theme of the celebration, was “Lift your voice!”
Credits:
Photo: Ian MacLellan

Caption:
“We must work together across the differences of skin color, gender, and religion. … We are making this journey together, in a drive to make this world a better place,” Ericsson said.

Aerospace engineer Aprille Joy Ericsson ’86, Instrument Project Manager at NASA’s Goddard Space Flight Center in Maryland and an alumna of MIT’s Department of Aeronautics and Astronautics, recalled Wednesday how a conversation with Martin Luther King Jr. affected a Hollywood actress’s career decision — and in turn helped to inspire Ericsson and many others of her generation to enter the world of aerospace engineering.

Nichelle Nichols, the actress who played Lieutenant Uhura on the original Star Trek series, was not under contract, Ericsson explained in her keynote talk at MIT’s 43rd annual celebration of King’s life and work. “King shared with her that Star Trek was one of the few TV shows he would let his children watch, primarily because of her role as chief technical officer on the Starship Enterprise,” which was so different than most portrayals of African-American women on television. After her conversation with King, Nichols reconsidered her plans to leave the show. She went on to provide a role model that Ericsson said helped propel her and many others into a career in the space program.

“Space travel has become a routine part of our daily lives,” though it remains a dangerous occupation, Ericsson said. Recalling the daring commitment that President John F. Kennedy made, launching the U.S. toward landing on the moon, “I believe that challenge is before us again,” she said.

Ericsson graduated from MIT just four months after the first space shuttle disaster, the Challenger accident in 1986. She earned her doctorate at Howard University and soon after went to work for NASA. “I followed my dream to explore space,” she says. But that road was not without its obstacles. “Discrimination affects us all,” she said. And yet, “inclusion of women and minorities” in working teams of all kinds, “is imperative. When I work with science and engineering teams, I know that each one on that team is important.”

“We scientists are agents of change,” she said. “Let’s embrace [Star Trek creator] Gene Roddenberry’s vision of diversity in space. We must work together across the differences of skin color, gender, and religion. … We are making this journey together, in a drive to make this world a better place.”

Ericsson suggested that people should think of their lives as if they were governed by an imaginary bank, which each day credits us with 86,400 seconds, or one day’s worth — but wipes out the balance at the end of the day. Make use of that time, and remember that it’s fleeting, she said: “I say, invest it! Please make the most of today and every day.”

“We’re all capable of making an impact,” she said, quoting King’s statement: “The time is always right to do what’s right.”

MIT President L. Rafael Reif, speaking to the MLK celebration audience, described a number of steps the Institute has taken in the last year to “make our community stronger and more inclusive.” These include the creation of a new Academic Council Working Group on Community, the recruitment of new specialists in multicultural mental health care, new sessions on diversity added to undergraduate orientation, and an increase of more than 10 percent in student aid.

“We live in a moment when some fundamental assumptions seem to be in question — about how we should conduct ourselves as individuals and as a society,” he said. Given that, he said, it’s worth reiterating some “unwritten rules” that govern life in the MIT community.

“At MIT, when our community is at its best, racism, bigotry, and discrimination are out of bounds, period. Diminishing or excluding others because of their identity — whether race, religion, gender, sexual orientation, disability, social class, nationality, or any other aspect — is unthinkable and unacceptable,” he said.

He added that “It's also out of the question to bully others, period. Such behavior is simply beneath us — because we value each other as members of our community and respect each other as fellow human beings. Intellectually, we are a community where prejudice — prejudging — is anathema. In the MIT community I love, our personal interactions benefit when we behave as we do in our intellectual work: Assume less and ask more, to learn more. Refrain from jumping to conclusions on superficial evidence. And listen as closely and as much as we can.”

Reif said that “when people of many backgrounds work together to address big human challenges — whether it’s climate change or fresh water access or Alzheimer’s — they come to value each other as human beings, united in a struggle larger than themselves.”

Reflecting on the deep divisions facing this country today, Reif added that “The coming months and years may put great pressure on us as a community. Whatever we face together, it is of the utmost importance that MIT remains a place that can endure, and grow from, the challenge of dissenting views — a community that makes room for us all.”

The event also featured reflections on King’s legacy by senior Rasheed Auguste and graduate student Faye-Marie Vassel. Auguste described a three-step process for addressing injustice in the world. Step one is recognizing a particular injustice that troubles you, he said. For example, “2016 was especially difficult for a lot of people.” After the election, “the weight of hateful rhetoric and injustice took its toll. … Regardless of political position, my MIT needed healing and support on Nov. 9. … It hurts to see people you know suffer and not being able to tell them ‘It’ll be okay.’ Because even though it may be reassuring, it might not be true.”

The second step, he said, is to “find a community of change-makers. Chances are, your issue is not as unique as you think. You are not, and have never been alone in your pain.” He went on to describe his meetings with MIT leadership in seeking ways to improve the inclusiveness of the Institute — as a result of which, he said “I felt empowered in the process, like I had a valued contribution to making our ideas, our compromises, our solutions, real.”

The final step, Auguste said, is to carry out the list of actions developed in step two. “Step three is putting in the work to make the justice a reality. … This amazing mentality exists at MIT: If you want something, go chase it. And if it doesn’t exist yet, then make it. People really live by this. So if you want justice, you have to chase it, to fight for it. You cannot settle for ambivalence, indifference, or passivity.”

Vassel, a doctoral student in biology, described some of the challenges of her own background, as the product of an interracial immigrant couple. (Her mother is a Russian from Uzbekistan and her father is Afro-Caribbean from Jamaica.) “Education in this country is still not equal and just for all.” She added, “I hope we all see the dangers of any political message that relies on dividing people. Quoting Dr. King, she said, "Injustice must be rooted out by strong, persistent and determined action. ... Always remember to lift your voice!”

Mission: "Space for all"