Hacking life inside and outside the laboratory 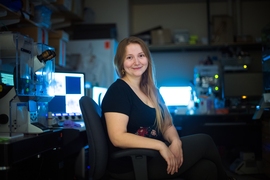 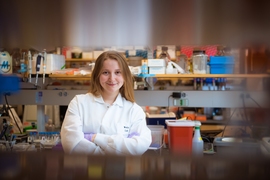 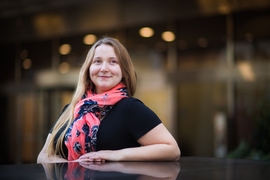 Jesse Tordoff makes cells form unusual patterns. “I have the coolest research project ever, which has the big, broad goal of controlling the shapes that cells grow into.” Her signature shape? Polka dots.

“The idea is that [the process is] synthetic, outside of the natural developmental pathways,” she explains. “My project mostly involves giving the cells genetic circuits to express cell-to-cell adhesion molecules differently.”

A fifth-year graduate student in the Computational and Systems Biology program, Tordoff is passionate about synthetic biology, which aims to create artificial systems from parts already found in nature — in her case, harnessing nature’s ability to form shapes as complex and intricate as the human body.

The field has implications for developing organoids, artificially grown organs, and even things as fantastic as living materials, where engineered structures may one day be able to grow and heal themselves.

Tordoff’s interest in science was fostered at an early age by her parents, who are both scientists at Monell Chemical Senses Center in Philadelphia. She recalls her father teaching her QBasic, a programming language, and her mother buying her a used light microscope that Tordoff used to observe microorganisms in pond water in her free time. She also grew to love entomology. “It’s official, I’m a nerd,” she laughs.

In college, Tordoff turned to computer science, where she became enamored with the creative process of coding and solving problems. She was also president of Yale University’s Women in Computer Science Club, an experience that encouraged her to reflect on the gender disparities in technical fields and to appreciate her parents’ support in cultivating her early interests in math and science.

She assumed she would seek a career in programming, but eventually Tordoff returned to bugs — this time cataloguing species in a part-time data entry job in college. Around the same time, she was introduced to the field of synthetic biology, and she realized that it perfectly merged her interests in computer science and the natural world.

“I like the biology-as-computer analogy so much,” she says. “A computer runs on binary code, and you can control pretty much every part of it. You can make programs that are human-readable and human-interpretable. Cells are obviously way more complicated; they’re not built from the ground up the way computers are built from the ground up — not yet! But they do work on logic the same way computers do, just with much more complexity and very different mechanisms underneath.”

The wealth of synthetic biology labs attracted Tordoff to MIT for graduate school, and she is thrilled to be here. “People get jaded about it, but we’re at the best research institute in the entire world! It sounds pretentious when you say it like that, but then somehow it’s more pretentious to say it’s not a big deal. It’s a huge deal!” she says.

Despite an unwavering enthusiasm for research, Tordoff had trouble adjusting to grad school, and she was plagued with imposter syndrome in her early years. Over her graduate career, these anxieties have subsided, but she often reflects on how she overcame them.

“A big part of getting over my imposter syndrome was having my own research project, which I think is the best thing about grad school,” she says. “I remember in my first year, all of my cohort cared so much about machine learning, and I did not feel called to the machine learning path. At the time, I thought ‘I’m so dumb, I can’t understand that it’s interesting.’ And now I realize that it’s actually just not my scene! It’s not as cool to me.”

The turning point came when she began working in the lab of Ron Weiss, a professor of biological engineering and of electrical engineering and computer science. After six months she got her own project, and she alone was responsible for designing and executing her experiments. “That made me feel like I was the expert — and it was true. And it made me realize that there is something that I’m good at. Realistically, there are a million ways to be good at something, and being honest about not understanding something is way more important than being the smartest person in the room,” Tordoff says.

It’s a lesson that she tries to pass on to first-year students, technicians, and laboratory rotation students, and she has relished her new role as a mentor in her program and lab. “Partially, I see in their eyes that … they may be dealing with some of the anxiety issues that I was, too. I survived it, and I survived it because everyone was nice to me and supported me, so I feel like it’s sort of a pay-it-forward thing,” she says.

A life outside the lab

These days, Tordoff has hit her stride. Living in Inman Square, she enjoys walking or biking to lab, getting takeout from Punjabi Dhaba, and watching Netflix with her boyfriend, Sam. In fact, she finds time for many activities outside of lab and is surprised at the work-life balance she’s managed to achieve. “I thought that you didn’t have any free time in grad school. But I have so much free time to do stuff that I like,” she says. “This weekend, I chilled and watched ‘Great British Bakeoff’ for hours. That was the biggest surprise for me in grad school. When I work late it’s because I want to, not because I have to.”

Tordoff is also a passionate crafter. Making resin jewelry is one of her favorite pastimes — a hobby that reflects her lifelong love of nature. She sometimes wears her creations, which can contain pressed flowers and leaves and sometimes acorns covered in glitter.

Tordoff is grateful for her supportive family, friends, and labmates for helping her to find her niche in graduate school as well as always reminding her that she is more than her work. Adopting this mindset has allowed her to thrive both inside and outside of the laboratory. Their support has also given her a passion for mentorship; she encourages other young, struggling graduate students to be patient, realize that they are smart, and most importantly, learn to fail.

“You just have to keep doing it! That’s the hardest lesson, for sure.”

Jaleesa Trapp shakes things up in the classroom and in computing