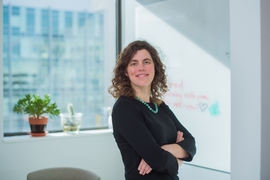 ↓ Download Image
Caption: “Many of the epigenetic phenomena we know about were first discovered in plants, and in terms of understanding the molecular mechanisms, work on plants has also led the way,” says Associate Professor Mary Gehring.
Credits: Image: Gretchen Ertl

Caption:
“Many of the epigenetic phenomena we know about were first discovered in plants, and in terms of understanding the molecular mechanisms, work on plants has also led the way,” says Associate Professor Mary Gehring.
Credits:
Image: Gretchen Ertl

Genes passed down from generation to generation play a significant role in determining the traits of every organism. In recent decades, scientists have discovered that another layer of control, known as epigenetics, is also critically important in shaping those characteristics.

Those added controls often work through chemical modifications of genes or other sections of DNA, which influence how easily those genes can be expressed by a cell. Many of those modifications are similar across species, allowing scientists to use plants as an experimental model to uncover how epigenetic processes work.

“Many of the epigenetic phenomena we know about were first discovered in plants, and in terms of understanding the molecular mechanisms, work on plants has also led the way,” says Mary Gehring, an associate professor of biology and a member of MIT’s Whitehead Institute for Biomedical Research.

Gehring’s studies of the small flowering plant Arabidopsis thaliana have revealed many of the mechanisms that underlie epigenetic control, shedding light on how these modifications can be passed from generation to generation.

Gehring, who grew up in a rural area of northern Michigan, became interested in plant biology as a student at Williams College, where she had followed her older sister. During her junior year at Williams, she took a class in plant growth and development and ended up working in the lab of the professor who taught the course. There, she studied how development of Arabidopsis is influenced by plant hormones called auxins.

After graduation, Gehring went to work for an environmental consulting company near Washington, but she soon decided that she wanted to go to graduate school to continue studying plant biology. She enrolled at the University of California at Berkeley, where she joined a lab that was studying how different genetic mutations affect the development of seeds.

That lab, led by Robert Fischer, was one of the first to discover an epigenetic phenomenon called gene imprinting in plants. Gene imprinting occurs when an organism expresses only the maternal or paternal version of particular gene. This phenomenon has been seen in flowering plants and mammals.

Gehring’s task was to try to figure out the mechanism behind this phenomenon, focusing on an Arabidopsis imprinted gene called MEDEA. She found that this type of imprinting is achieved by DNA demethylation, a process of removing chemical modifications from the maternal version of the gene, effectively turning it on.

After finishing her PhD in 2005, she worked as a postdoc at the Fred Hutchinson Cancer Research Center, in the lab of Steven Henikoff. There, she began doing larger, genome-scale studies in which she could examine epigenetic markers for many genes at once, instead of one at a time.

During that time, she began studying some of the topics she continues to investigate now, including regulation of the enzymes that control DNA methylation, as well as regulation of “transposable elements.” Also known as “jumping genes,” these sequences of DNA can change their position within the genome, sometimes to promote their own expression at the expense of the organism. Cells often use methylation to silence these genes if they generate harmful mutations.

After her postdoc, Gehring was drawn to MIT by “how passionate people are about what they’re working on, whether that’s biology or another subject.”

“Boston, especially MIT and Whitehead, is a great environment for science,” she says. “It seemed like there were a lot of opportunities to get really smart and talented students in the lab and have interesting colleagues to talk with.”

When Gehring joined the Whitehead Institute in 2010, she was the only plant biologist on the faculty, but she has since been joined by Associate Professor Jing-Ke Weng.

Her lab now focuses primarily on questions such as how maternal and paternal parents contribute to reproduction, and how their differing interests can lead to genetic conflicts. Gene imprinting is one way that this conflict is played out. Gehring has also discovered that small noncoding RNA molecules play an important role in imprinting and other aspects of inheritance by directing epigenetic modifications such as DNA methylation.

She has also identified a genetic circuit that controls an enzyme that is required to help patterns of DNA methylation get passed from parent to offspring. When this circuit is disrupted, the methylation state changes and unusual traits can appear. In one case, she found that the plants’ leaves become curled after a few generations of disrupted methylation.

“You need this genetic circuit in order to maintain stable methylation patterns. If you don’t, then what you start to see is that the plants develop some phenotypes that get worse over generational time,” she says.

Many of the epigenetic phenomena that Gehring studies in plants are similar to those seen in animals, including humans. Because of those similarities, plant biology has made significant contributions to scientists’ understanding of epigenetics. The phenomenon of epigenomic imprinting was first discovered in plants, in the 1970s, and many other epigenetic phenomena first seen in plants have also been found in mammals, although the molecular details often vary.

“There are a lot of similarities among epigenetic control in flowering plants and mammals, and fungi as well,” Gehring says. “Some of the pathways are plant-specific, like the noncoding RNA pathway that we study, where small noncoding RNAs direct DNA methylation, but small RNAs directing silencing via chromatin is something that happens in many other systems as well.”

More than just a pretty flower