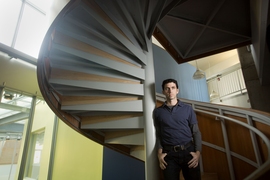 The sequencing of the human genome laid the foundation for the study of genetic variation and its links to a wide range of diseases. But the genome itself is only part of the story, as genes can be switched on and off by a range of chemical modifications, known as “epigenetic marks.”

Now, a decade after the human genome was sequenced, the National Institutes of Health’s Roadmap Epigenomics Consortium has created a similar map of the human epigenome.

Manolis Kellis, a professor of computer science and a member of MIT’s Computer Science and Artificial Intelligence Laboratory and of the Broad Institute, led the effort to integrate and analyze the datasets produced by the project, which constitute the most comprehensive view of the human epigenome to date.

In a paper published today in the journal Nature, Kellis and his colleagues report 111 reference human epigenomes and study their regulatory circuitry, in a bid to understand their role in human traits and diseases.

“The consortium set out to systematically characterize the human epigenomic landscape, across diverse tissues and cell types,” Kellis says. “Given the enormity of the task, that meant bringing together multiple mapping centers and profiling a wide range of cell and tissue samples, to capture the diversity of the human epigenome.”

The researchers generated 2,805 genome-wide datasets, encompassing a total of 150 billion sequencing reads, corresponding to 3,174-fold coverage of the human genome. These captured modifications of both the DNA itself, and of the histone proteins around which DNA is wrapped to form a structure known as chromatin.

Kellis and his team then developed and applied machine-learning algorithms that could translate these datasets into a reference map in each of the 111 cell types and tissues. The algorithms distinguished different classes of epigenomic modifications and used them to annotate the genomic regions active in each sample, and in particular regulatory elements that control where and when different genes are expressed.

“Different combinations of epigenetic marks characterize different regions of the genome, reflecting the specific functions that they play in each cell,” Kellis says. “By studying these combinations systematically, we can learn the language of the epigenome, and what it is telling us about both the activity and the function of each genomic region in each of the cell types.”

The researchers distinguished 15 different epigenomic signatures, or chromatin states, reflecting active, repressed, poised, transcribed, and inactive regions of the genome in each cell type. About 5 percent of each reference epigenome showed signatures associated with a regulatory function.

“Chromatin states allowed us to summarize the complexity of diverse epigenomic marks into a small number of common patterns,” Kellis says. “We could then interpret the biological functions of these patterns.”

“Unlike the genome, which is mostly unchanged across cell types, the epigenome is extremely dynamic, reflecting the specialization of each cell type, such as neurons, heart, muscle, liver, skin, blood, or immune cells,” Kellis says. “By studying which regions turn on and off in the same cell types, we can gain insights into gene regulation.”

The researchers grouped 2 million predicted regulatory regions into 200 sets, or modules, which appeared to be acting in a coordinated manner across different types of cells. They found that 100 of these modules contained common sequence patterns, known as regulatory motifs, which may be responsible for their ability to work together in this way.

“Exploiting the predicted regulators and their motifs can help dissect the circuitry of different tissues and cells,” Kellis says.

The researchers also compared these epigenomic signatures with groups of genetic variants that are associated with different human traits and diseases. This allowed them to produce a map of the tissue and cell types that are most relevant to each trait or disease.

“We found that genetic variants are found in regulatory regions known as enhancers, which are activated only in certain types of cell and tissue,” Kellis says. “This suggests that many genetic variants affect the regulatory circuitry of the cell, possibly disrupting gene functions by altering tissue-specific gene expression levels.”

“This unbiased view allows researchers to focus on relevant cells and tissues that may have been otherwise overlooked when studying a particular disease,” Kellis says. “The regulatory circuitry of a diverse range of cells can contribute to diseases that manifest in seemingly unexpected organs.”

Using these circuits to understand the molecular basis of human disorders will take many years and the effort of many labs, Kellis says. “Our results provide an invaluable map, and a rich set of hypotheses, which can help guide these studies.”

Wolf Reik, head of the epigenetics research program at the Babraham Institute in the U.K., who was not involved in the research, says the project is an exciting resource for the biomedical community worldwide.

“Important epigenetic marks were mapped systematically in many human cell types and tissues,” Reik says. “Integrative analysis of these epigenomes provides a global map toward understanding fundamental developmental and disease processes in humans.”

Sarah Hedgecock writes for Forbes about how researchers have made major advances in mapping the human epigenome. Prof. Manolis Kellis explains that the new findings allow researchers to “ go from a static picture of the genome, which is effectively the book of life, to a dynamic picture of a genome.”

A team of researchers has published a map of the human epigenome, which could be useful in better understanding how to treat disease, writes Amanda Schupak for CBS News. Prof. Manolis Kellis explains that the findings provide “a reference for studying the molecular basis of human disease, by revealing the control regions that harbor genetic variants associated with different disorders."

Marcus Woo writes for Wired about how researchers have published a number of articles providing new information on the human epigenome, which controls which genes get switched on or off. “It is giving us a view of the living, breathing genome in motion, as opposed to a static picture of DNA,” explains Prof. Manolis Kellis.

For the first time, researchers have mapped the epigenome, identifying the switches that can turn individual genes on or off, reports Sharon Beagley for Reuters. Says Prof. Manolis Kellis of the need to understand the epigenome, "The only way you can deliver on the promise of precision medicine is by including the epigenome.”

Work on mapping the human epigenome, led by Professor Manolis Kellis, could reveal the origins of diseases such as cancer and Alzheimer’s, reports Carolyn Johnson for The Boston Globe. “The research was one major piece of a $240 million National Institutes of Health program that funded 88 grants over 10 years,” Johnson explains.

Researchers have mapped the epigenome, shedding light on how genes are controlled, which could be useful in understanding disease, reports Gina Kolata for The New York Times. “We now have an unprecedented view of the living human genome,” says Prof. Manolis Kellis.

Rachel Feltman of The Washington Post reports that a team led by Professor Manolis Kellis has released the most complete map of the human epigenome to date. “The researchers tied specific cell changes to 58 different biological traits,” writes Feltman. “Sometimes the epigenomic changes of a cell reveal possible clues about disease.”