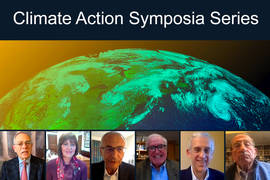 To stave off the worst immediate outcomes of climate change, the U.S. needs to reach net zero carbon emissions by 2050, according to a report released this June by the U.S. House Select Committee on the Climate Crisis.

In the final event in MIT’s Climate Action Symposia series, held Nov. 16, a panel of policymakers agreed the 2050 deadline means that the time for small-scale climate solutions has passed. Swift and massive investment by the U.S. federal government is essential, they said, beginning with the incoming Biden administration.

Rep. Kathy Castor of Florida said previous climate legislation has stalled in the face of climate change deniers in Congress and the influence of entrenched interests such as fossil fuel companies. Castor is the chair of the House Select Committee on Climate Crisis. She called its report a roadmap for how the U.S. can decarbonize the power and transportation sectors of the economy, among other recommendations.

The Biden administration climate change plan, which includes many of the same elements as the House report, would cost $2 trillion, Castor noted, likening it to past massive federal efforts such as building the interstate highway system or mobilizing the country for World War II.

To reach the 2050 emissions goal, “it’s all hands on deck,” she said. “We don’t have any more time to waste to take small measures. We have to take the larger steps to make progress.”

Investments toward the 2050 goal also can help rebuild an economy that has been devastated by the Covid-19 pandemic, said John Podesta, chair and counselor at the Center for American Progress. The Biden plan and the House report emphasize new job and industry creation through zero-emission vehicle manufacture, new power transmission systems for clean energy, and new low-carbon construction.

“It’s a shift of thinking from where we were a decade ago,” said Podesta, who served as a counselor to the president on climate and environmental policy in the Obama administration. “It really calls for these major investments sustained by the federal government but deployed by the private sector and by state and local government.”

The Biden plan also includes a goal for 40 percent of all clean energy and infrastructure benefits contained in the plan to go to disadvantaged communities, he noted, “to build back a more just and equitable economy.”

The past four years have weakened global trust in the U.S. when it comes to addressing climate change, said Todd Stern, a nonresident senior fellow at The Brookings Institution.

“Countries are not going to look at us in just the same way, but I will say this: I think countries are going to be very eager to have the U.S. back,” said Stern, who led the U.S. effort in negotiating the Paris climate agreement. “Somewhat wary, for understandable reasons, but eager.”

Along with rejoining the Paris agreement, the U.S must make climate change a “core part” of its national security and diplomatic strategy, said Stern. As a start, the U.S. should renew its partnerships with the European Union’s climate leaders and attempt to repair a deteriorated relationship with China to prod it to speed up its own zero carbon goals.

In a lively discussion moderated by MIT’s John Deutch, Institute Professor Emeritus, and Paul Joskow, Elizabeth and James Killian Professor of Economics Emeritus, the panelists argued over whether decarbonization by 2050 was more aspirational than realistic. Faced with the prospect of the collapse of water and food systems, climate refugees, and failed states, “I don’t ask myself if it’s realistic,” Podesta said. “I ask myself is it critical or necessary, and the answer to that is yes.”

MIT President L. Rafael Reif, speaking at the symposium’s start, said the pandemic has many thinking similarly about the imminent climate challenge.

“This tragic, natural crisis has demonstrated that as individuals and as a society, we can actually change, more and faster than we have believed possible,” he said. “It has also made clear that refusing to change can be catastrophic, and that nature does not respond to wishful thinking.”

Getting the carbon out of the electricity sector