Getting the carbon out of the electricity sector 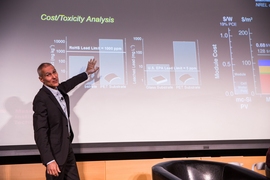 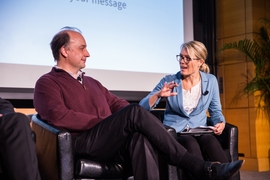 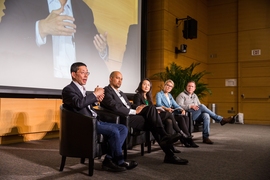 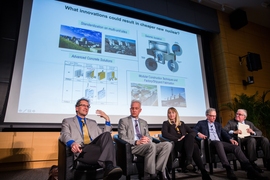 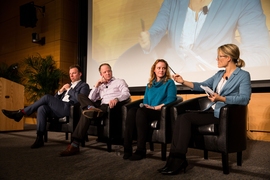 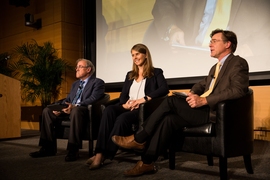 The generation of electricity is a huge contributor to the world’s emissions of climate-altering greenhouse gases, producing some 25 percent globally. That’s because more than two-thirds of the world’s electricity is still being produced by burning fossil fuels. But progress in a variety of areas could allow for drastic reductions in those emissions, as several specialists in engineering and economics outlined last week at the third of six climate change symposia being held this academic year at MIT.

Titled “Decarbonizing the Electricity Sector,” the symposium centered on four areas: improvements in solar energy and storage systems, advances in nuclear power and fusion, electric vehicles, and expanding access to electricity in the developing world while curbing emissions.

“Globally, we are in the midst of a major decarbonization strategy to create clean electricity,” said Paul Joskow, a professor of economics at MIT’s Sloan School of Management and co-moderator of the symposium. But, he said, it will also be essential to cut emissions from the other major sectors, especially in transportation and in building operations.

Jessika Trancik, an associate professor of energy studies at MIT’s Institute for Data, Systems, and Society and the event’s other moderator, said that “solar represents one of the biggest successes,” given that solar module prices have dropped by 90 percent since 2000. But there is still great potential for significant further progress in the next few years.

Moungi Bawendi, the Lester Wolfe Professor of Chemistry, described some promising research on solar technology, including the use of perovskite-based solar cells with potential for much greater output for a given weight. This technology may open up possibilities for solar panels that could be integrated into building exteriors, including transparent ones incorporated in windows.

The material is soluble and could be produced in a roll-to-roll process like printing a newspaper, potentially making it inexpensive and easy to deploy, Bawendi said. Today, “it’s within striking distance of silicon” in its efficiency. Because it is a hundred times more absorbent of solar energy than silicon, “it can be made a hundred times thinner and still collect the same amount of light,” he said. But there are still challenges related to scaling up its production and making it more durable when exposed to water. “It’s an engineering problem that can be solved,” he said.

As for storage, which is crucial as solar and wind power become larger components of the world’s generating capacity, there is great progress in that field as well. Currently, over 90 percent of storage capacity in the electric grid is in the form of lithium-ion batteries, said Yet-Ming Chiang, the Kyocera Professor of Materials Science. But more cost-effective alternatives are under development, which could enable rapid expansion of renewables.

For example, he described efforts to develop batteries based on much cheaper and more abundant materials than lithium, including sulfur and zinc. Prices for some kinds of batteries based on such materials could potentially drop to as little as $1 per kilowatt hour, compared to about $160 for today’s lithium-ion batteries, he suggested.

Other kinds of batteries, emphasizing storage capacity for a given weight, are also being developed, which might help expand battery power into areas such as aviation, where it has not played a role so far, he said. Still others might be used for backup storage; these may be used infrequently but would remain stable for long periods.

Jacopo Buongiorno, the TEPCO Professor of Nuclear Science and Engineering, described a recent report that he led, on the future of nuclear technology, which found several areas of new kinds of nuclear plant designs that hold promise for future installations. But he said at this point such potential is mostly in other countries, as there is little interest among domestic utility companies today. New designs, including ones that are modular and standardized to reduce construction costs, could help to revitalize that industry.

Meanwhile, promising work on fusion power, which if perfected could provide virtually limitless emissions-free power, is progressing well on several fronts, said Earl Marmar, a senior research scientist in MIT’s physics department. One key to that has been the development of improved superconductors, enabling a drastic reduction in the size of a fusion plant needed to produce a given amount of power. That technology is at the heart of an ongoing joint project between MIT and Commonwealth Fusion Systems.

Another factor that could help in the transition away from fossil fuels is the increasing use of electric cars. Trancik said that today, the use of an electric car reduces emissions per mile travelled by about 30 percent on average, but that depends crucially on the mix of generating sources used in the grid at the location and time when the car is recharged. Cars charged entirely by solar power would eliminate their emissions altogether.

David Keith, an assistant professor of systems dynamics at MIT Sloan, said “my question is how quickly can electric vehicles diffuse into the fleet?” He pointed out that there are some 250 million cars in this country, and their average lifetime is 15 years, so the turnover is a slow process. Currently, even though virtually all automakers offer some kind of electric model, their sales still represent a very small fraction of the total.

Christopher Knittel, the George P. Shultz Professor at MIT Sloan, said there has been great progress in lowering the costs of the kind of lightweight batteries needed for electric vehicles, and that as those prices continue to fall, that could unleash rapid growth in the penetration of electric vehicles into the market. They will soon reach the point where battery prices will no longer cause electric vehicles to be costlier than their gasoline counterparts, and that could be a turning point, he said.

But as the use of electricity grows around the world, any progress in reducing emissions in the industrialized world could be offset if new generating capacity in the developing world follows the same fossil-based trajectory other nations have. That can sometimes be the most accessible option, however, so finding ways to hold emissions down while advancing the availability of reliable power can be a challenge.

Kate Steel, co-founder of Nithio, described how her company approaches that issue by providing simple, low-cost, solar-powered installations that can provide some basic services, such as lighting and cellphone charging, to people in regions not yet served by reliable electric grids or any service at all.

Rob Stoner, deputy director for science and technology at the MIT Energy Initiative, said that there are presently about 800 million people worldwide without access to electricity. While there is a goal of providing universal access by 2050, that will be very challenging to achieve, he said.