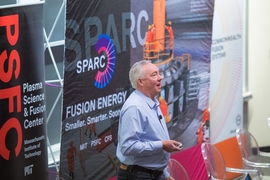 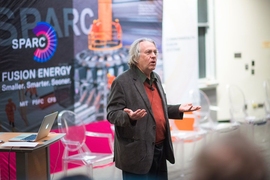 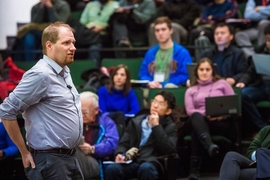 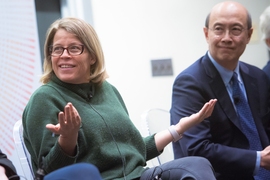 Caption:
Katie Rae, president and CEO of The Engine, and Andrew Lo, professor of economics at the Sloan School.
Credits:
Images: Gretchen Ertl

A year after announcing a major public-private collaboration to design a fusion reactor capable of producing more power than it consumes, researchers from MIT and the startup company Commonwealth Fusion Systems on Tuesday presented the MIT community with an update on their progress. In a series of talks, they detailed the effort’s continuing work to bring about practical fusion power — based on the reaction that provides the sun’s energy — on a faster timescale than any previous efforts.

At the event, titled “The MIT Fusion Landscape,” speakers explained why fusion power is urgently needed, and described the approach MIT and CFS are taking and how the project is taking shape. According to Dennis Whyte, head of MIT’s Plasma Science and Fusion Center (PSFC), the new project’s aim is “to try to get to fusion energy a lot faster,” by creating a prototype fusion device with a net power output within the next 15 years. This timeframe is necessary to address “the greatest challenge we have now, which is climate change.”

“Humanity is standing on the edge of a precipice right now,” warned Kerry Emanuel, the Cecil and Ida Green Professor in Earth and Planetary Sciences, who studies the impacts climate change will have on the intensity and frequency of hurricanes and other storms. Because of the existential threat posed by climate change, it is crucial to develop every possible source of carbon-free energy, and fusion power has the potential to be a major part of the solution, he said.

Emanuel countered the claims by some skeptics who say that climate has always been changing, pointing out that human civilization has developed during the last several thousand years, which has been a period of exceptional climate stability. While global sea level rose by 400 feet at the end of the last ice age, he said, that was a time when humans were essentially nomads. “A 1-meter change today, in either direction, would be very problematic for humanity,” he said, adding that expected changes in rainfall patterns could have serious impacts on access to water and food.

Only three large countries have successfully shifted their economies away from fossil fuels, he said: Sweden, Belgium, and France. And all of those did so largely on the strength of hydropower and nuclear power — and did so in only about 15 years. “We’re going to have to do whatever works,” he said, and while conventional fission-based nuclear power may be essential in the near term, in the longer term fusion power could be key to weaning the world from fossil fuels.

Andrew Lo, the Charles E. and Susan T. Harris Professor of Economics at MIT’s Sloan School of Management, said that for large projects such as the development of practical fusion power plants, new kinds of funding mechanisms may be needed, as conventional venture capitalists and other traditional sources may not be sufficient to meet their costs. “We need to get the narrative right,” he said, to make it clear to people that investments will be needed to meet the challenge. “We need to make fusion real,” which means something on the order of a billion dollars of investment in various potential approaches, to maximize odds of success, Lo said.

Katie Rae, executive director of The Engine, a program founded by MIT and designed to help spinoff companies bridge the gap between lab and commercial success, explained how that organization’s directors quickly came to unanimous agreement that the fusion project, aimed at developing a demonstration fusion device called SPARC, was worthy of the maximum investment to help bring about its transformative goals. The Engine aims to help projects whose development doesn’t fit into the 10-year expectation for a financial return that is typical of venture capital funds. Such projects require more long-range thinking — up to 18 years, in the case of the SPARC project. The goals of the project, she said, aligned perfectly with the reasons The Engine was created. “It is so central to why we exist,” she said.

Anne White, a nuclear physicist at the PSFC and the Cecil and Ida Green Associate Professor in Nuclear Engineering, explained why the SPARC concept is important for moving the field of fusion to a path that can lead directly to commercial power production. As soon as the team’s demonstration device proves that it is possible to produce more power than the device consumes — a milestone never yet achieved by a fusion device — “the narrative changes at that moment. We’ll know we are almost there,” she said.

But getting to that point has always been a daunting challenge. “It was a bit too expensive and the device was a bit too big” to move forward, until the last few years when advances in superconducting magnet technology made it possible to create more powerful magnets that could enable a smaller fusion power plant to deliver an amount of power that would have required a larger power plant with previous technology. That’s what made the new SPARC project possible, White explained.

Bob Mumgaard, who is CEO of the MIT spinoff company CFS, described the next steps the team is taking: to design and make the large superconducting magnet assemblies needed for a working fusion demonstration device. The company, which currently has 30 employees but is growing fast, is in the process of “building the strongest magnets we can build,” which in turn may find applications in other industries even as the group makes progress toward fusion power. He said within two years they should have full-scale magnets up and running.

CFS and the MIT effort are far from alone, though, Mumgaard said. There are about 20 companies actively involved in such fusion research. “This is a vibrant, evolving system,” he said. Rather than a static landscape, he said, “there’s a lot of interplay — it’s more of an ecosystem.” And MIT and CFS, with their innovative approach to designing a compact, lower-cost power plant architecture that can be built faster and more efficiently, “have changed the narrative already in that ecosystem, and that is a very exciting thing.”

Tapping the MIT talent pool for the future of fusion

On the right path to fusion energy