Making an impact through chemical engineering 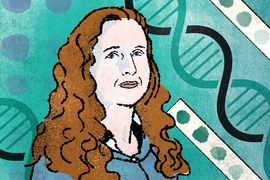 ↓ Download Image
Caption: Hadley Sikes, who recently earned tenure in MIT’s Department of Chemical Engineering, devotes much of her lab’s effort to devising inexpensive, highly sensitive tests for diseases such as malaria, tuberculosis, and cancer.
Credits: Illustration: Jose-Luis Olivares, MIT. Based off a photo by Lillie Paquette.

Caption:
Hadley Sikes, who recently earned tenure in MIT’s Department of Chemical Engineering, devotes much of her lab’s effort to devising inexpensive, highly sensitive tests for diseases such as malaria, tuberculosis, and cancer.
Credits:
Illustration: Jose-Luis Olivares, MIT. Based off a photo by Lillie Paquette.

As a chemical engineer, Hadley Sikes loves studying complex systems such as networks of chemical reactions. But in her work designing practical devices for diagnostics and other applications, she embraces simplicity.

Sikes, an associate professor who recently earned tenure in MIT’s Department of Chemical Engineering, devotes much of her lab’s effort to devising inexpensive, highly sensitive tests for diseases such as malaria, tuberculosis, and cancer. Making these tests easy to use is key to their success, she says.

“In the products that we want to widely disseminate, our idea is that if things are as simple as they can be, that might give them a better chance of being more widely used,” she says.

In recent months, she has turned her attention to developing a diagnostic test for Covid-19. Unlike most diagnostics, which look for the virus’s genetic material (RNA), the test she is working on detects viral proteins, and would yield results quickly, with no specialized instruments required.

The tests she develops in her lab, while simple in appearance and use, are based on a detailed understanding of the complicated mechanisms of reactions such as transfers of electrons between atoms (known as redox reactions), as well as the precise molecular interactions between different proteins.

Sikes was drawn to science starting in elementary school, and she began participating in science fairs as a middle school student in Mobile, Alabama. In one project, she did a caffeine toxicology study on sea urchin embryos in hopes of persuading her father, a professor of biology at the University of South Alabama, to cut down on his coffee consumption. (Her findings did not have the desired effect.)

At Tulane University, Sikes majored in chemistry, where she worked in a lab studying phase transitions — the transformations between states of matter such as solid to liquid. She went on to Stanford University for graduate school, where she earned a PhD in physical chemistry. For her thesis, she studied a particular aspect of redox chemistry: the properties of organic materials that could be used to move electrons as quickly as possible from the surface of an electrode to an oxidizing agent dissolved in the solution surrounding the electrode.

Following those studies in fundamental chemical phenomena, Sikes decided that she wanted to try to apply her knowledge to real-world problems. “If we can have this high-level fundamental understanding and be able to design experiments and uncover molecular mechanisms, what sorts of societal benefit could I aim that at?” she says.

As a postdoc in a chemical engineering lab at the University of Colorado, she decided to try to develop biosensors that can detect interactions between proteins and other molecules. She realized that for the work to succeed, she needed to learn more about engineering proteins, so she spent two years at Caltech working in the lab of Frances Arnold, a Nobel Prize-winning pioneer in the use of directed evolution to engineer enzymes.

When applying for faculty positions, Sikes was drawn to MIT, in particular the Department of Chemical Engineering, by its focus on doing science that can be valuable to society.

“The department was excited about the same thing that I was: the idea of using science and technology to have an impact in the world,” she says. “Since that’s what I really cared about, I liked that that was not just something you could do on your own time, after you published your papers, but that was the whole purpose here.”

Sikes’ lab now divides its efforts between two main projects: diagnostic sensors for infectious diseases common in the developing world, and sensors that could be used to help cancer doctors predict the best treatment for individual patients’ tumors.

In the area of infectious disease, Sikes and her colleagues are working on paper tests that could be used to detect up to five different diseases from one patient sample, which could be blood, urine, or saliva. The goal is to make the tests easy to read and inexpensive — less than a dollar per test. They have identified markers for malaria, tuberculosis, Dengue virus, and Zika virus, and are working on developing very small antibody proteins to interact with those markers. The smaller the proteins, the higher concentration they can put on the test strip, which allows it to produce results within just a few minutes.

Much of this work is being done as part of the Singapore-MIT Alliance for Research and Technology, especially the Antimicrobial Resistance Interdisciplinary Research Group.

On the cancer side, Sikes uses her expertise in redox chemistry to study the role of oxidative stress in cancer. Some tumors exhibit high levels of this kind of stress, which is caused by altered metabolism and leads to increased levels of hydrogen peroxide, an oxidant. This is somewhat surprising, Sikes says, because tumors can be cut off from the body’s blood supply and have little oxygen available.

“There’s this mystery of where are all these oxidants coming from, if it’s not an oxygen-rich environment,” Sikes says. “There’s also an idea that oxidative stress could be targeted with therapeutics that would induce cancer cell death.”

However, there is also evidence that some tumors become more aggressive when treated with drugs that target oxidative stress, so Sikes is now working to develop ways to predict how tumor cells from different patients would respond to such drugs. These studies are based on precise measurements of different oxidation states of sulfur sites within proteins, which are common targets of oxidants, and their locations within cells. The researchers correlate this data with how the cells respond to treatment with a variety of different drugs, in hopes that they can identify markers that reveal whether a particular tumor cell will be susceptible to drugs that affect the cell’s oxidative state.

“We’re hoping to discover what to measure in a tumor biopsy to know if this tumor is going to be susceptible to a redox drug or not, and our reaction network analysis has told us what to look for,” Sikes says. “Understanding complex chemical reaction networks like these is something that is core to chemical engineering.”

3 Questions: Hadley Sikes on searching for a Covid-19 protein test

The creation of a public engineer