Caption:
Charleen Wang takes an image of the chalk art to post on the Chalk of the Day instagram.
Credits:
Photo: Julia Newman/DSL Communications

The Ray and Maria Stata Center is an architectural staple of MIT’s campus. Inside the angled walls and modern exterior lives the Computer Science and Artificial Intelligence Laboratory (CSAIL), the Laboratory for Information and Decision Systems (LIDS), and the Department of Linguistics and Philosophy. It's also a central hub for conferences, lunch meetings, and regular events like Choose to Reuse. Building 32 also houses the canvas used by student group Chalk of the Day to share daily works of art.

Chalk of the Day was started in 2015 by Benjamin Chan ’17 as a way to give back to the MIT community through inspirational messages and doodles. Today, Chalk of the Day remains a tight-knit group of friends who craft new pieces of art that are visible to passers-by for a day, memorialized on the group's Instagram account — and then erased every night. 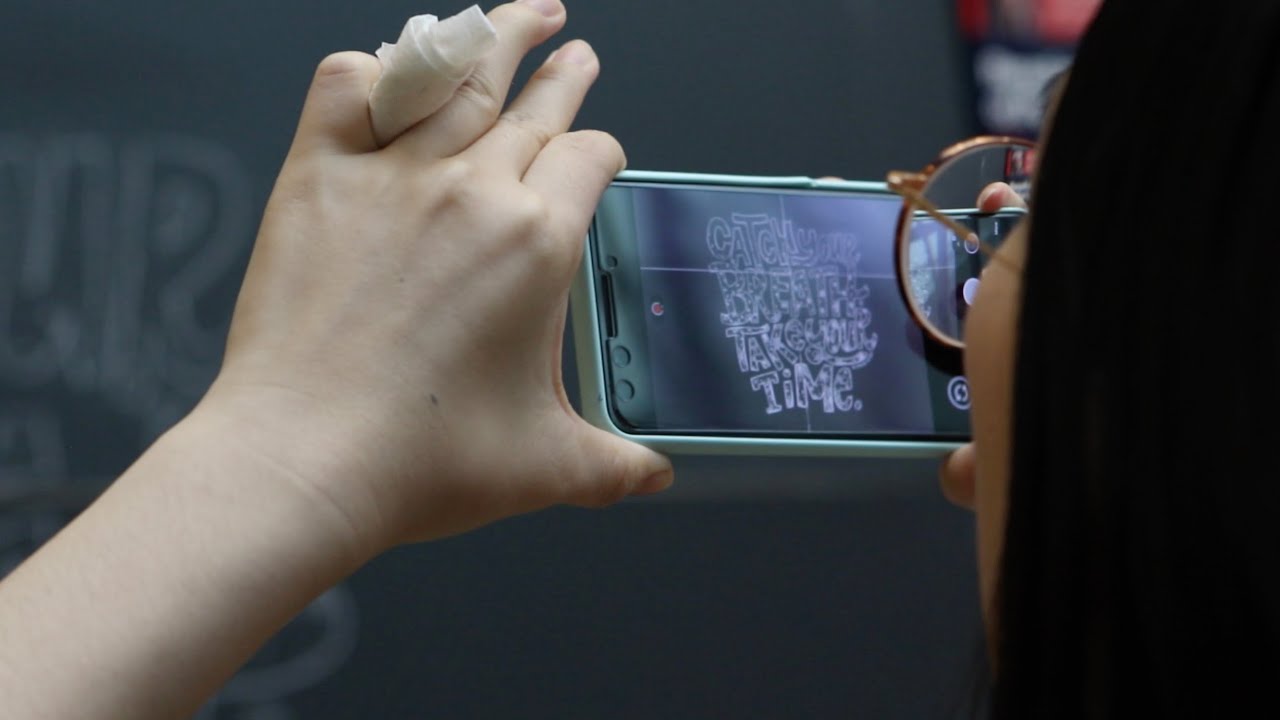 Priscilla Wong, a chalker who finished her coursework in computer science and engineering last fall and will be graduating in May, says she began chalking as a way to find an escape from the typical routine at MIT. Each semester, students schedule and claim a day based on their availability. Wong and her chalking partner Jessica Xu, a junior in mechanical engineering, have chalked before, and last semester, they made sure they shared free Tuesday mornings to continue their tradition of making art together.

Using a pointillist technique, Wong taps the chalk repeatedly against the board to create a snow effect as she discusses the ways in which chalk is an unusual medium. “Some of the most difficult things about chalking are also what makes it the most interesting,” she says. “If you chalk over a really big area it ends up snowing down on everything below. Sometimes it’s an effect you want to achieve.” Her chalk partner, Jessica Xu, adds “for the most part we come up with techniques on our own.” Wong echoes how there’s a learning curve and the way they learn is simply by chalking.

The works of art span from inspirational quotes to more political works, like a drawing in response to the Australian wildfires: a mama and child koala sit in a tree with the text “save us” above, the letters connecting like a crossword puzzle to configure AUS for Australia. The art is often incredibly detailed: One homage to the film “Up” displayed the characters lifted by a house tied to balloons with the message “adventure is out there,” while another featured a hummingbird eating nectar from a blossoming flower.

Sarah Wu, a senior mathematics major, has been chalking since her first year at MIT, when she was looking for more artsy things to do around campus. She compares chalking with solving a math problem: Both require a level of creativity, but approaching a blank canvas is a totally different process and engages a different part of her mind. Chalking is a way to relax and de-stress for Wu: “Normally, I’m always thinking about the next assignment or the next test, but this is an opportunity where once a week I can actually remove myself from that and try to focus only on the art I’m making and the things I’m contributing to the community.” She and her chalking partner, Charleen Wang, a senior in electrical engineering and computer science, worked on a lettering piece that reads “Catch your breath, take your time,” filled with snowflakes mimicking the weather conditions outside.

Wang shares a similar sentiment to Wu about the importance of Chalk of the Day in her routine. “I think sometimes I forget to engage in a more creative side of me. I learned a lot about how to put in other priorities that I might be forgetting into my schedule. It’s not all about grades,” she says. She likes how temporary chalk is as a medium. “I feel more free to try different things because it’s not something so permanent like pen or painting.” Every day is an opportunity for chalk artists to try something new, create a new work of art, and feel empowered to think outside of the box.

Chalking helps students de-stress, but more than that, their artwork spreads positivity and inspiration to the entire MIT community. Passersby “send it to their boyfriend or girlfriend or friend or mother. I like that it has an impact that is beyond Stata or MIT,” Wong reflects. Chalk of the Day members hope that sharing the daily chalk-works encourages others to be more creative in their everyday lives.