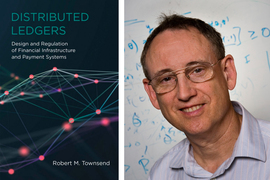 ↓ Download Image
Caption: Robert Townsend has a new book coming out about “distributed ledger” technologies, including but not limited to Bitcoin. The book is titled “Distributed Ledgers: Design and Regulation of Financial Infrastructure and Payment Systems,” and is being published by MIT Press.
Credits: Photo: L. Barry Hetherington

Caption:
Robert Townsend has a new book coming out about “distributed ledger” technologies, including but not limited to Bitcoin. The book is titled “Distributed Ledgers: Design and Regulation of Financial Infrastructure and Payment Systems,” and is being published by MIT Press.
Credits:
Photo: L. Barry Hetherington

The cryptocurrency Bitcoin has become a center of excitement, mystery, and controversy. Boosters have viewed it as an investment opportunity, a financial innovation, and a rival to state-controlled currencies; skeptics think it is an energy-wasting market bubble.

MIT economist Robert Townsend sees things differently. To Townsend, Bitcoin, for all its novelty, is part of a larger family of financial innovations, known as “distributed ledgers,” which allow people to perform financial activities without requiring a central authority to keep a master copy of those transactions and while minimizing the need for individuals to trust each other.

Functionally, distributed ledgers can be applied to payments, financial accounts, escrow mechanisms, and contracts. These tools have evolved globally while receiving comparatively little attention — even though some of the tools are part of Bitcoin.

“Almost everyone has heard of Bitcoin, and likewise, they have opinions about it,” Townsend observes. “It’s quite a politicized issue. But a lot of its technologies were pre-existing. They got put together in a rather interesting and complicated way in Bitcoin. But the idea of having a common ledger implemented by consensus on transactions, that was not unique to Bitcoin; that predated it.”

Now Townsend has written a book, “Distributed Ledgers: Design and Regulation of Financial Infrastructure and Payment Systems,” published this month by the MIT Press, in which he surveys these tools and analyzes their usefulness. Overall, Townsend writes, distributed ledgers “have the potential to transform economic organization and financial structure,” especially in areas of the world lacking financial institutions — although not only in those places.

“These things are increasingly being used quite a lot,” Townsend says. “On the other hand, there is [also] a lot of exaggeration and hype and outright failure.”

Up close in Thailand

The book’s origins start with the Townsend Thai Project, a 20-year research effort Townsend oversaw, starting in the 1990s, which collected monthly financial data from hundreds of households in several provinces. This helped Townsend see the potential of distributed ledgers, since many Thai people and communities lack easy access to financial institutions.

“People tend to react relative to what they have in their own country,” Townsend says. “In Europe or the U.S., there are very sophisticated financial infrastructures, so the issue is, ‘Why do we need Bitcoin or financial ledgers at all?’ But if you make your way into one of the Thai villages that I study, armed with the data that I collected over 20 years, the gaps become quite apparent.”

One apparent gap: The Thai baht, the currency, is heavily paper-intensive. And as Townsend explains, “Thailand is now an upper-middle income country relative to Myanmar and Cambodia, and it has immigrants coming in to work with the objective of sending money home to their families.”

Moreover, the same distributed-ledger principle applies to “smart” contracts and escrow services, which are often lacking in Thailand.

Escrow addresses “the ability to make and honor a promise,” as Townsend puts it. In places like the U.S., large transactions such as a house sale can have delicate timing issues. Sellers need assurances that payments will be forthcoming, and buyers need assurances that goods are available. Usually, money is held by a third party until the terms of a deal are fulfilled.

But since distributed ledger technologies offer a platform where two parties can make synchronized exchanges, they can substitute for the escrow process.

“In rural areas of Thailand, they don’t have that,” Townsend says. “The banks don’t think traditionally of farmers having any interest in these [escrow-type] instruments. But of course, it’s really quite important.” With distributed ledgers, farmers could deliver goods without getting burned by bogus payments.

Moving beyond Asia, Townsend notes, Kenya boasts a notable alternate currency: M-PESA, a phone-based money-transfer system created by mobile provider Safaricom in 2007. With M-PESA, used by 90 percent of Kenyans who lack bank accounts, people deposit funds and transfer them to others as payments, at parity with the Kenyan shilling, and with low transaction costs. Studies by MIT economist Tavneet Suri show M-PESA helps spread risk effectively.

However, Safaricom offers no collateral for user deposits, so there are customer risks. And the M-PESA network runs through agents, 60 percent of whom lack liquidity at least once per month.

“That’s entirely a private initiative, it’s not government-sponsored, and you do have to trust the cell-phone company,” Townsend says. “You’re giving your money to an agent, who’s crediting your account. Granted, you can check on your phone and see if it’s there … but there’s nothing securing it.”

M-PESA is also a step removed from some types of distributed ledgers, since Safaricom is a third party overseeing transactions; it more closely resembles some types that do use third-party validation. But Townsend writes that M-PESA, as a flexible currency substitute, has “great social value” for Kenyans, and believes it should be part of the discussion about how financial innovation can meet the needs of society.

“Distributed Ledgers” has gained positive notice from experts in the field. Hyun Song Shin, economic adviser and head of research for the Bank for International Settlements, states that Townsend has shown “mastery” of the subject “as a top-notch theorist and with concrete examples,” adding: “This impressive book is a must-read for all serious observers of digital currencies and the payment system.”

For his part, Townsend hopes many people — policymakers, technologists, finance industry experts, and any other readers — will seriously consider the cases beyond Bitcoin that show the value of new finance tools.

“I’m very eclectic about it,” Townsend says. “I always think of these things as options. You don’t have to go the full route to consensus algorithms [like Bitcoin] on distributed ledgers to achieve a lot.”

Deep in the field