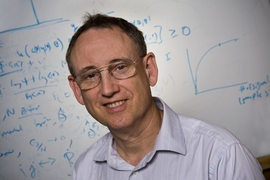 Caption:
Robert Townsend, the Elizabeth and James Killian Professor of Economics at MIT.
For all the detailed tools developed to study finance in past decades, relatively few scholars have brought those methods to bear on a pressing social question: How do poor people manage their finances?

Now, a long-term study of the poor in small villages in Thailand is shedding light on the issue. Having a sound financial strategy, including a commitment to saving money, has a large impact on lifting families out of poverty, the research reveals. Moreover, advances in wealth are linked to highest level of education obtained by a household member, as well as a willingness to try new ventures.

The study, based on a unique set of data collected under the direction of MIT economist Robert M. Townsend, shows that among rural households, 43 percent realized significant and lasting gains in net worth over a seven-year period, and that 81 percent of that wealth accumulation was due to savings of income, as opposed to gifts or remittances, that is, contributions the family did not earn.

“There is not a poverty trap in these Thai villages,” says Townsend, the Elizabeth and James Killian Professor of Economics at MIT. “There are strategies people can pursue to increase their relative wealth.”

The findings are summarized in a new working paper, “Wealth Accumulation and Factors Accounting for Success,” written by Townsend and Anan Pawasutipaisit of Thammasat University in Thailand, and slated to be published in the Journal of Econometrics. The conclusions are based on a pioneering survey of household finances in 16 Thai villages that Townsend initiated in 1997. This paper takes monthly data from 1999 through 2006, for 531 households, and represents a unique view into the month-by-month financial lives of rural villagers in a country that has demonstrated substantial economic growth in recent years, yet still has substantial pockets of poverty.

The Thai villagers in the survey tend to be farmers, fishermen, laborers or run small businesses. Households that do get ahead have some generally shared characteristics. The heads of households tend to be younger than in the families that do not increase their worth. Additionally, gains in wealth correlate specifically to the highest level of education obtained by a family member, and not the family’s median educational level, as Townsend notes.

“It’s not the average wisdom of household members pulled together,” says Townsend. Rather, he notes, “It’s suggestive that it is the ability or talent of one individual” that can change a family’s entire economic trajectory.

Moreover, the data show financial success to be a persistent feature of certain households, meaning it is not the case that “successful entrepreneurs are those that simply get lucky” due to one good crop or fish harvest, as Townsend and Pawasutipaisit write in the paper. But new ventures are sometimes behind the accrual of wealth. In one survey village, the household with the highest annual rate of return on assets (17 percent) was headed by a corn farmer whose wife insisted that they try raising dairy cows instead, sensing that owning livestock would be more profitable in their area; the idea came in part after a milk cooperative sent workers to educate villagers about cows.

“This work really lifts the veil on the lives of low-income people that had been hidden, largely because we don’t usually collect data with this frequency,” says Jonathan Morduch, a professor of public policy and finance at New York University. “Once you do that, you see that people are not passively accepting their fates. We see a lot of consumption smoothing — people’s incomes are going up and down, but they’re borrowing, saving, insuring with each other and reducing risk in an informal way. People are actively seizing opportunities. That’s exciting and important to know.”

Townsend has also summarized some of his research in a 2010 book, Households as Corporate Firms (Cambridge University Press), written with economist Krislert Samphantharak of the University of California, San Diego. Now, as the survey continues, Townsend and Christopher Woodruff, another economist at the University of California, San Diego, are trying to further define just what it is that makes some households more entrepreneurial-minded and able to generate a higher return on assets than others. Currently the survey is asking questions about financial literacy and risk-taking tendencies in an attempt to create a more detailed profile of the types of households that escape poverty as a result of trying new businesses.

How do small gains feed a large economy?

In turn, another area of ongoing research for Townsend and his colleagues is the attempt to take the microeconomic data from individual households and villages, and use it to flesh out the macroeconomic analysis of Thailand’s economy as a whole.

“It’s easy to think of Thailand and countries like it as producing GDP [gross domestic product] from the factories which line the highways as you enter Bangkok,” says Townsend, referring to firms like Ford and Nike with large operations in the area. But multinationals and incorporated businesses only account for 20 percent of Thailand’s national income. “We already know that households as firms are a big building block of the national economy,” he adds. “We want to understand the evolution of that as the economy itself gets bigger. Where did the bigger, domestically owned Thai firms come from? Did they grow from some interesting earlier existence?”

The financial activities of people in the more rural areas of Thailand are linked to the larger economic situation in the country in other ways as well. Households in many Thai villages run businesses that do not earn as great a rate of return as, for instance, savings accounts; some of the more financially savvy Thai households put their savings into banks.

“And then that money becomes somebody else’s loan,” says Townsend. “In the United States, people talk about Main Street and Wall Street as if they are separate. But we think it’s really important to understand how these financial institutions and markets are put together, and how that fabric is woven into the national-level economy. That’s a very big part of our ongoing research.”

Some funding for the research was provided by the John Templeton Foundation, the Bill & Melinda Gates Foundation, and the National Institute of Child Health and Human Development.