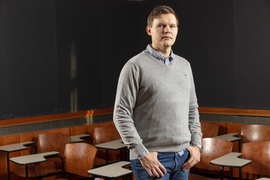 He’s an associate editor of the journal Probability and Mathematical Physics. His PhD dissertation advanced understanding of wave decay in black hole spacetimes. And much of his research focuses on developing new ways to understand the correspondence between classical physics (which describes light as rays that travel in straight lines and bounce off surfaces) and quantum systems (wherein light has wave-particle duality).

So it may come as a surprise that, as a student growing up in Siberia, he didn’t study physics in depth.

“Much of my work is deeply related to physics, even though I didn’t receive that much physics education as a student,” he says. “It took when I started working as a mathematician to slowly start understanding things like general relativity and modern particle physics.”

A math-loving family, and inspiring mentors

His mathematical education, however, has been extensive — and started early.

Dyatlov was raised in a family of mathematicians. One of his two brothers is an applied mathematician. Both of his parents have math degrees. He grew up a five-minute walk away from the campus of Novosibirsk State University (NSU), a major academic research center in Siberia, where his father still teaches.

“From a young age I was exposed to all kinds of mathematics,” he says. “There were journals and books lying around our house. I was very lucky that I both liked mathematics and was born into a family where a lot of mathematics was going on.”

He can even trace his interest in microlocal analysis — his field of specialty today as an associate professor of mathematics at MIT — to conversations with his older brother decades ago. These talks sparked a fascination with partial differential equations, which Dyatlov studied as an undergraduate at NSU, where both his brother and father received their PhDs.

Dyatlov went on to pursue graduate studies at the University of California at Berkeley. There his trajectory was influenced by a course he took during his first year with Professor Maciej Zworski on the theory of scattering resonances, which he explains are “pure states for systems in which energy can scatter to infinity.”

It would prove to be a fruitful encounter. Zworski became Dyatlov’s dissertation advisor; a decade later, they are still collaborating. In addition to the many papers that they have written together, they co-authored a new textbook published by the American Mathematical Society in September.

Zworski, who received both his bachelor’s degree and PhD in math from MIT, gave Dyatlov a particular problem to tackle early in his graduate studies.

“There was back then a bit of a mystery surrounding how to apply scattering theory methods to black holes,” he recalls. The problem, which related to this mystery, grew into his dissertation’s detailed exploration of exponential wave decay in the context of general relativity.

Of luck, collaboration, and “trapped trajectories”

In December 2013, Dyatlov began a postdoc at MIT; by 2015 he had been hired as an assistant professor of mathematics. He is now an associate professor and was awarded tenure in 2019.

“I sometimes feel I just got lucky many times,” Dyatlov says of his professional journey, from growing up in a family of mathematicians to finding influential mentors and collaborators like Zworski.

Dyatlov is now studying how the behavior of quantum systems over long time periods corresponds to that of classical systems. Some of his recent research focuses on spectral gaps for open quantum chaotic systems.

To help beginning students conceptualize it, he offers the analogy of striking a bell: “How does the shape of a bell determine how long its sound is sustained?” (Sometimes he uses MIT math department mugs instead.)

The shape of the bell determines how long the sound is sustained. The difference lies in both the pitch of the sound, and in how long it can be heard. “You can study both,” he says, “but a natural question to ask is, no matter how you hit the bell, how long does it take for the sound to die out?”

Classical physics might characterize what’s happening with the bell (or mug) as a phenomenon similar to light bouncing off a mirror: The sound bounces once off the bell and then escapes to infinity.

“Mathematically what you hope to see is some exponential decay of energy, of the solution to a corresponding wave equation,” he explains. What interests Dyatlov is the rate of this decay, and whether, in some situations, there may not be any exponential decay at all.

His recent work delves into what happens with these trajectories under conditions of “quantum chaos.”

“Say you have waves bouncing off, and everything else escapes but you have a system — say the inside of a bowl — where these classical trajectories never leave. The thing that I study is a situation where you have in your system a fractal set of trapped trajectories,” he says.

These trapped trajectories form a fractal set that appears “out of nowhere,” he says. “The fact that fractal sets appear from this was known well before my work, but it was still a surprise to me when I looked at it. Here, a fractal set appears naturally in a problem where you didn’t put in a fractal set.”

“I figured out one might be able to solve this wave decay question — this question about partial differential equations, about classical-quantum correspondence, about wave dynamics, and chaotic dynamics — but the component you need is this new kind of fractal uncertainty principle,” he says.

Pursuing this question required him to branch out into different fields of math, which lay outside his own training. In that pursuit, he caught another “lucky break:” MIT professor of mathematics Larry Guth suggested he talked with Joshua Zahl, a postdoc who had been thinking independently about a related question, from his own field of additive combinatorics. Applying their respective techniques, they developed a proof for exponential decay in some specific fractal sets and wrote a paper together on the subject. A couple years later — in yet another “lucky” collaboration — Dyatlov worked with the late Jean Bourgain, a renowned mathematician at the Institute for Advanced Study, to prove the fractal uncertainty principle for the general case of these sets.

“You have your toolbox, and you try to get as much out of it as you can for a problem,” he says, but sometimes you have to seek out new tools. “MIT is a great place for that.”

That act of reaching across fields is fundamental to the practice of mathematics, he says. The book that he recently published with Zworski opens with a quote from Goethe: “Mathematicians are Frenchmen of sorts: Whatever one says to them they translate into their own language and then it becomes something entirely different.”

Dyatlov sees a connection between this epigraph and his own forays into the correspondence between math and physics.

“It’s an ironic take on that,” he says. “There’s a natural repelling force for math and physics to diverge into separate fields, because we do things so differently. Experimental physicists have to respect the reality of situation, and have to think about what you can model in a lab. As a mathematician, you focus on things you can prove. You have to distill and translate the physical phenomena into theorems.”

“It’s up to people in communities to create an attracting force to work together and bridge this divide.”

The answer to life, the universe, and everything