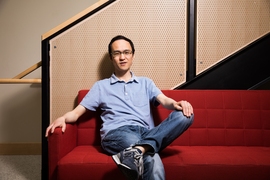 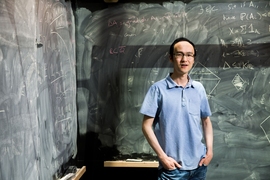 Wei Zhang’s breakthrough happened on the train. He was riding home to New York after visiting a friend in Boston, during the last year of his PhD studies in mathematics at Columbia University, where he was focusing on L-functions, an important area of number theory.

“All of a sudden, things were linked together,” he recalls, about the flash of insight that allowed him to finish a key project related to his dissertation. “Definitely it was an ‘Aha!’ moment.”

But that moment emerged from years of patient study and encounters with other mathematicians’ ideas. For example, he had attended talks by a certain faculty member in his first and third years at Columbia, but each time he thought the ideas presented in those lectures wouldn’t be relevant for his own work.

“And then two years later, I found this was exactly what I needed to finish a piece of the project!” says Zhang, who joined MIT two years ago as a professor of mathematics.

As Zhang recalls, during that pivotal train ride his mind had been free to wander around the problem and consider it from different angles. With this mindset, “I can have a more panoramic way of putting everything into one piece. It’s like a puzzle — when you close your eyes maybe you can see more. And when the mind is trying to organize different parts of a story, you see this missing part.”

Allowing time for this panoramic view to come into focus has been critical throughout Zhang’s career. His breakthrough on the train 11 years ago led him to propose a set of conjectures that he has just now solved in a recent paper.

“Patience is important for our subject,” he says. “You’re always making infinitesimal progress. All discovery seems to be made in one moment. But without the preparation and long-time accumulation of knowledge, it wouldn’t be possible.”

An early and evolving love for math

Zhang traces his interest in math back to the fourth grade in his village school in a remote part of China’s Sichuan Province. “It was just pure curiosity,” he says. “Some of the questions were so beautifully set up.”

He started participating in math competitions. Seeing his potential, a fifth-grade math teacher let Zhang pore over an extracurricular book of problems. “Those questions made me wonder how such simple solutions to seemingly very complicated questions could be possible,” he says.

Zhang left home to attend a high school 300 miles away in Chengdu, the capital city of Sichuan. By the time he applied to study at Peking University in Beijing, he knew he wanted to study mathematics. And by his final year there, he had decided to pursue a career as a mathematician.

He credits one of his professors with awakening him to some exciting frontiers and more advanced areas of study, during his first year. At that time, around 2000, the successful proof of Fermat’s Last Theorem by Andrew Wiles five years earlier was still relatively fresh, and reverberating through the world of mathematics. “This teacher really liked to chat,” Zhang says, “and he explained the contents of some of those big events and results in a way that was accessible to first-year students.”

“Later on, I read those texts by myself, and I found it was something I liked,” he says. “The tools being developed to prove Fermat’s Last Theorem were a starting point for me.”

Today, Zhang gets to cultivate his own students’ passion for math, even as his teaching informs his own research. “It has happened more than once for me, that while teaching I got inspired,” he says. “For mathematicians, we may understand some sort of result, but that doesn’t mean we actually we know how to prove them. By teaching a course, it really helps us go through the whole process. This definitely helps, especially with very talented students like those at MIT.”

From local to global information

Zhang’s core area of research and expertise is number theory, which is devoted to the study of integers and their properties. Broadly speaking, Zhang explores how to solve equations in integers or in rational numbers. A familiar example is a Pythagorean triple (a2+b2=c2).

“But after that, how do you return to the initial question?” he says. “Can you tell an equation has an integer solution by collecting data from modular arithmetic?” Zhang investigates whether and how an equation can be solved by restoring this local data to a global piece of information — like finding a Pythagorean triple.

His research is relevant to an important facet of the Langlands Program — a set of conjectures proposed by mathematician Robert Langlands for connecting number theory and geometry, which some have likened to a kind of “grand unified theory” of mathematics.

Bridging other branches of math with number theory has become one of Zhang’s specialties.

In 2018, he won the New Horizons in Mathematics Breakthroughs Prize, a prestigious award for researchers early in their careers. He shared the prize with his old friend and undergraduate classmate, and current MIT colleague, Zhiwei Yun, for their joint work on the Taylor expansion of L-functions, which was hailed as a major advance in a key area of number theory in the past few decades.

Their project grew directly out of his dissertation research. And that work, in turn, opened up new directions in his current research, related to the arithmetic of elliptic curves. But Zhang says the way forward wasn’t clear until five years — and many conversations with Yun — later.

“Conversation is important in mathematics,” Zhang says. “Very often mathematical questions can be solved, or at least progress can be made, by bringing together people with different skills and backgrounds, with new interpretations of the same set of facts. In our case, this is a perfect example. His geometrical way of thinking about the question was exactly complementary to my own perspective, which is more number arithmetic.”

Lately, Zhang’s work has taken place on fewer train rides and more flights. He travels back to China at least once a year, to visit family and colleagues in Beijing. And when he feels stuck on a problem, he likes to take long walks, play tennis, or simply spend time with his young children, to clear his mind.

His recent solution of his own conjecture has led him to contemplate unexplored terrain. “This opened up a new direction,” he says. “I think it’s possible to finally get some higher-dimensional solutions. It opens up new conjectures.”