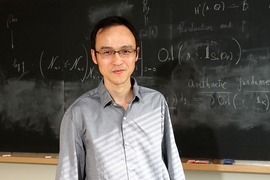 Wei Zhang, a professor in MIT’s Department of Mathematics, has been awarded the New Horizons in Mathematics Breakthrough Prize, which is given to promising junior researchers who have already produced important work in mathematics. He shares the prize with Zhiwei Yun, who has been a professor of mathematics at Yale University and is joining the MIT faculty in January 2018.

Founded by a group of Silicon Valley entrepreneurs, the Breakthrough Prizes recognize the world’s top scientists in life sciences, fundamental physics, and mathematics.

In addition to the $3 million prizes awarded in these three categories, up to three $100,000 New Horizons in Physics and up to three New Horizons in Mathematics Prizes are given out to early-career researchers each year. The prizes were announced at a ceremony last night at NASA’s Ames Research Center in Mountain View, California.

Zhang is a number theorist who works in arithmetic geometry, with special interest in fundamental objects such as L-functions, which appear in the Riemann hypothesis and its generalizations, and are central to the Langlands program.

He and Yun have been recognized by the Breakthrough Prize “for deep work on the global Gan-Gross-Prasad conjecture and their discovery of geometric interpretations for the higher derivatives of L-functions in the function field case.”

“I am delighted that the joint work of these two recently hired faculty members is being recognized by this prestigious award. Their work on the Taylor expansion of L-functions constitutes the most important progress in 30 years towards the Birch and Swinnerton-Dyer conjecture, one of the seven Clay Millenium problems,” says Michel Goemans, head of the Department of Mathematics.

Zhang has received the 2010 SASTRA Ramanujan Prize, the Sloan Research Fellowship in 2013, the Morningside Gold Medal of Mathematics at the International Congress of Chinese Mathematicians in 2016, and a Simons Fellowship in 2017.

MIT applied mathematics doctoral candidate and former NFL player John Urschel was one of the presenters at the ceremony.