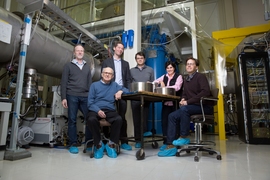 The scientists and engineers of the LIGO Scientific Collaboration, who detected gravitational waves and reported their discovery in February, have been awarded a $3 million Special Breakthrough Prize in Fundamental Physics.

The prize will be shared between two groups of laureates: the three founders of the Laser Interferometer Gravitational-Wave Observatory (LIGO), who will each equally share $1 million; and 1,012 contributors to the experiment, who will each equally share $2 million. The three founders are Rainer Weiss, emeritus professor of physics at MIT; Kip Thorne, Caltech’s Richard P. Feynman Professor of Theoretical Physics, emeritus; and Ronald Drever, emeritus professor of physics at Caltech.

The discovery, announced on Feb. 11, again confirmed Einstein’s theory of general relativity and opened up a new way in which to view the universe. According to the researchers’ calculations, the gravitational wave they detected was the product of a collision between two massive black holes, 1.3 billion light years away.

“I am extremely pleased that the organizers of the Breakthrough prize have decided to honor the entire team of people that made the discovery,” Weiss told The Guardian.

Prof. Emeritus Rainer Weiss and the LIGO team were honored as recipients of the 2016 Breakthrough Prizes during a ceremony in California, reports Lisa Krieger for Mercury News. The LIGO team was honored for their “observation of gravitational waves, a discovery which opens new horizons in astronomy and physics.”

New York Times reporter Dennis Overbye writes that the scientists of the LIGO Scientific Collaboration have been honored with a $3 million Special Breakthrough Prize in Fundamental Physics for their work successfully detecting gravitational waves.

The researchers involved with the successful detection of gravitational waves have been honored with a Special Breakthrough Prize in Fundamental Physics, reports Joseph Ax for Reuters. "This is the first time we've seen the full force of Einstein's theory of gravity at work,” says Edward Witten, head of the selection committee.