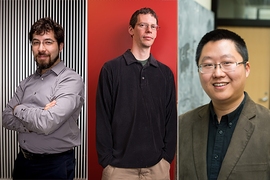 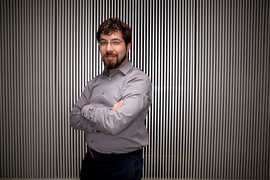 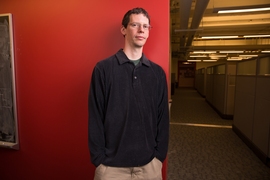 Edward Boyden, an associate professor of media arts and sciences, biological engineering, and brain and cognitive sciences, was one of five scientists honored with the Breakthrough Prize in Life Sciences, given for “transformative advances toward understanding living systems and extending human life.” He will receive $3 million for the award.

MIT physicists also contributed to a project that won the Breakthrough Prize in Fundamental Physics. That prize went to five experiments investigating the oscillation of subatomic particles known as neutrinos. More than 1,300 contributing physicists will share in the recognition for their work, according to the award announcement. Those physicists include MIT associate professor of physics Joseph Formaggio and his team, as well as MIT assistant professor of physics Lindley Winslow.

“By challenging conventional thinking and expanding knowledge over the long term, scientists can solve the biggest problems of our time,” said Mark Zuckerberg, chairman and CEO of Facebook, and one of the prizes’ founders. “The Breakthrough Prize honors achievements in science and math so we can encourage more pioneering research and celebrate scientists as the heroes they truly are.”

Boyden was honored for the development and implementation of optogenetics, a technique in which scientists can control neurons by shining light on them. Karl Deisseroth, a Stanford University professor who worked with Boyden to pioneer the technique, was also honored with one of the life sciences prizes.

Optogenetics relies on light-sensitive proteins, originally isolated from bacteria and algae. About 10 years ago, Boyden and Deisseroth began engineering neurons to express these proteins, allowing them to selectively stimulate or silence them with pulses of light. More recently, Boyden has developed additional proteins that are even more sensitive to light and can respond to different colors.

Scientists around the world have used optogenetics to reveal the brain circuitry underlying normal neural function as well as neurological disorders such as autism, obsessive-compulsive disorder, and depression.

Boyden is a member of the MIT Media Lab and MIT’s McGovern Institute for Brain Research.

The Breakthrough Prize in Fundamental Physics was awarded to five research projects investigating the nature of neutrinos: Daya Bay (China); KamLAND (Japan); K2K/T2K (Japan); Sudbury Neutrino Observatory (Canada); and Super-Kamiokande (Japan). Researchers with these experiments were recognized “for the fundamental discovery of neutrino oscillations, revealing a new frontier beyond, and possibly far beyond, the standard model of particle physics.”

Formaggio and his team at MIT have been collaborating on the Sudbury Neutrino Observatory (SNO) project since 2005. Research at the observatory, 2 kilometers underground in a mine near Sudbury, Ontario, demonstrated that neutrinos change their type — or “flavor” — on their way to Earth from the sun.

Winslow has been a collaborator on KamLAND, located in a mine in Japan, since 2001. Using antineutrinos from nuclear reactors, this experiment demonstrated that the change in flavor was energy-dependent. The combination of these results solved the solar neutrino puzzle and proved that neutrinos have mass.

The MIT SNO group has participated heavily on the analysis of neutrino data, particularly during that experiment’s final measurement phase. The MIT KamLAND group is involved with the next phase, KamLAND-Zen, which is searching for a rare nuclear process that if observed, would make neutrinos their own antiparticles.

Guth, who will receive a $100,000 prize, was honored for his “ingenious and surprising solutions to long standing open problems in symplectic geometry, Riemannian geometry, harmonic analysis, and combinatorial geometry.”

Guth’s work at MIT focuses on combinatorics, or the study of discrete structures, and how sets of lines intersect each other in space. He also works in the area of harmonic analysis, studying how sound waves interact with each other.

Fu will share a New Horizons in Physics Prize with two other researchers: B. Andrei Bernevig of Princeton University and Xiao-Liang Qi of Stanford University. The physicists were honored for their “outstanding contributions to condensed matter physics, especially involving the use of topology to understand new states of matter.”

Fu works on theories of topological insulators — a new class of materials whose surfaces can freely conduct electrons even though their interiors are electrical insulators — and topological superconductors. Such materials may provide insight into quantum physics and have possible applications in creating transistors based on the spin of particles rather than their charge.

Yesterday’s prize ceremony was hosted by producer/actor/director Seth MacFarlane; awards were presented by the prize sponsors and by celebrities including actors Russell Crowe, Hilary Swank, and Lily Collins. The Breakthrough Prizes were founded by Sergey Brin and Anne Wojcicki, Jack Ma and Cathy Zhang, Yuri and Julia Milner, and Mark Zuckerberg and Priscilla Chan.

“Breakthrough Prize laureates are making fundamental discoveries about the universe, life, and the mind,” Yuri Milner said. “These fields of investigation are advancing at an exponential pace, yet the biggest questions remain to be answered.”

Prof. Edward Boyden speaks with STAT about winning the Breakthrough Prize and his research at MIT. Boyden explains that the technique he developed to examine brain samples is being applied to “bacteria, cancer, biopsies, virology questions. There’s a huge pent-up demand for ways of seeing large objects with nanoscale precision.”

STAT reporter Andrew Joseph writes about optogenetics and Prof. Edward Boyden’s work developing this technique for turning neurons on and off. “There are just huge frontiers out there for which optogenetics will be one of our most powerful tools,” said Robert Desimone, director of the McGovern Institute.

Boston Globe reporter Felicia Gans writes that a number of MIT researchers have been honored “by the Breakthrough Prize organization, which honors scientists worldwide for their pioneering research.”

Prof. Edward Boyden has been honored as one of the recipients of the Breakthrough Prize, reports Sarah McBride for Reuters. Boyden is being recognized for his work “developing and implementing optogenetics,” writes McBride, which could open “a new path to treatments for Parkinson’s, depression, Alzheimer’s and blindness.”

Writing for Scientific American, Simon Makin explores the many applications of optogenetics, a tool developed by Prof. Edward Boyden, for which he was recently honored with a Breakthrough Prize. Makin explains that, “researchers have devised ways of broadening optogenetics to enter into a dynamic dialogue with the signals moving about inside functioning brains.”

Tina Casey reports for Popular Science that several MIT researchers have been honored with Breakthrough Prizes. Casey writes that Prof. Edward Boyden was honored for his work creating optogenetics, Prof. Joseph Formaggio and his team were honored for their research on neutrinos, and Profs. Larry Guth and Liang Fu won New Horizons Prizes.