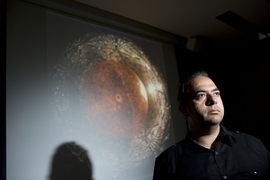 Caption:
MIT has been a member of the Sudbury Neutrino Observatory since 2005.
Credits:
Photo: Roy Kaltschmidt/Lawrence Berkeley National Lab

Today, the Royal Swedish Academy of Sciences announced the winners of this year’s Nobel Prize in physics. The 2015 prize was awarded to Takaaki Kajita of the Super-Kamiokande Experiment and Arthur McDonald of the Sudbury Neutrino Observatory (SNO) “for the discovery of neutrino oscillations, which shows that neutrinos have mass.” MIT associate professor of physics Joseph Formaggio, a member of the SNO collaboration, explains the implications of neutrino oscillations and MIT’s participation in SNO, and describes the active program in neutrino physics at MIT.

Q: What are the implications of this year’s Nobel announcement?

A: Neutrinos have long baffled scientists, ever since Wolfgang Pauli predicted their existence in 1930. For a long time, physicists had convinced themselves — based on the predictions of the Standard Model that describes particles and their interactions — that neutrinos should be massless particles. However, a number of oddities about neutrinos had started to become apparent in various experiments that were studying sources of neutrinos. In one case, the number of neutrinos produced in the upper atmosphere by cosmic rays did not agree with predictions. In another, there was an outstanding “solar neutrino puzzle” whereby almost two-thirds of neutrinos produced in the core of the sun were “missing.”

At the end of the 20th century, two remarkable experiments, the Sudbury Neutrino Observatory and the Super-Kamiokande experiment (led by Art McDonald and Takaaki Kajita, respectively), came onto the scene. Their measurements demonstrated beyond a reasonable doubt that the missing neutrinos were transmuting from one type (often referred to as flavor) to another. This transformation can only come about if neutrinos are “massive” (albeit with a very tiny mass).

The discovery had vast implications for our understanding of particle physics. Indeed, the demonstration of neutrino mass stands as the first deviation from the predictions of the Standard Model. The discovery also had other ramifications. For example, having solved the longstanding solar neutrino puzzle, scientists could confirm that their understanding of how the sun and other stars produce energy was indeed correct.

Q: What was MIT’s contribution to this finding?

A: MIT has been a member of the Sudbury Neutrino Observatory since I joined the Department of Physics in 2005. A number of graduate students, undergraduate students, and postdocs participated in the analysis of the data taken by the experiment. The MIT group was particularly engaged in the third phase of the experiment, where the experiment carried out very precise measurements of the transmutation properties of the neutrinos.

Q. What is the next step for this research?

A. Neutrinos have always been full of surprises! Almost all of our previous assumptions made about neutrinos have turned out to be incorrect one way or another, making work in this field very exciting. There are still plenty of open questions in neutrino physics that we hope to answer with future experiments.

In particular, the Laboratory of Nuclear Science at MIT has a wide and active program in neutrino physics. My group is pursuing novel ways to determine the mass scale of neutrinos and their impact on our understanding of cosmology. Lindley Winslow aims her research at understanding the nature of neutrino mass; in particular, whether neutrinos might be their own anti-particle. Janet Conrad searches for the existence of additional types of neutrinos beyond the three known types, and whether neutrinos can indeed help explain why the universe is made of matter rather than equal amounts of matter and antimatter. MIT has a strong and vibrant program in trying to understand this elusive particle.