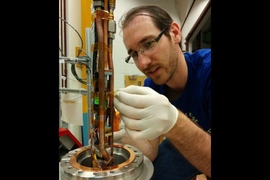 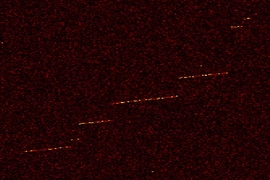 ↓ Download Image
Caption: Shown here is "event zero," the first detection of a trapped electron in the MIT physicists' instrument. The color indicates the electron's detected power as a function of frequency and time. The sudden “jumps” in frequency indicate an electron collision with the residual hydrogen gas in the cell. 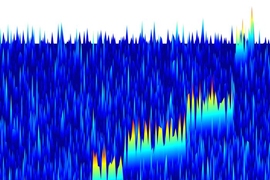 ↓ Download Image
Caption: A three-dimensional interpretation of "event zero." The frequency increases slowly as the electron loses energy, ending in the first of six or possibly seven visible frequency jumps before the electron is ejected from the trap.
Credits: Courtesy of the researchers

Caption:
Shown here is "event zero," the first detection of a trapped electron in the MIT physicists' instrument. The color indicates the electron's detected power as a function of frequency and time. The sudden “jumps” in frequency indicate an electron collision with the residual hydrogen gas in the cell.
Credits:
Courtesy of the researchers

Caption:
A three-dimensional interpretation of "event zero." The frequency increases slowly as the electron loses energy, ending in the first of six or possibly seven visible frequency jumps before the electron is ejected from the trap.
Credits:
Courtesy of the researchers

MIT physicists have developed a new tabletop particle detector that is able to identify single electrons in a radioactive gas.

As the gas decays and gives off electrons, the detector uses a magnet to trap them in a magnetic bottle. A radio antenna then picks up very weak signals emitted by the electrons, which can be used to map the electrons’ precise activity over several milliseconds.

The team worked with researchers at Pacific Northwest National Laboratory, the University of Washington, the University of California at Santa Barbara (UCSB), and elsewhere to record the activity of more than 100,000 individual electrons in krypton gas.

The majority of electrons observed behaved in a characteristic pattern: As the radioactive krypton gas decays, it emits electrons that vibrate at a baseline frequency before petering out; this frequency spikes again whenever an electron hits an atom of radioactive gas. As an electron ping-pongs against multiple atoms in the detector, its energy appears to jump in a step-like pattern.

“We can literally image the frequency of the electron, and we see this electron suddenly pop into our radio antenna,” says Joe Formaggio, an associate professor of physics at MIT. “Over time, the frequency changes, and actually chirps up. So these electrons are chirping in radio waves.”

Formaggio says the group’s results, published in Physical Review Letters, are a big step toward a more elusive goal: measuring the mass of a neutrino.

Neutrinos are among the more mysterious elementary particles in the universe: Billions of them pass through every cell of our bodies each second, and yet these ghostly particles are incredibly difficult to detect, as they don’t appear to interact with ordinary matter. Scientists have set theoretical limits on neutrino mass, but researchers have yet to precisely detect it.

“We have [the mass] cornered, but haven’t measured it yet,” Formaggio says. “The name of the game is to measure the energy of an electron — that’s your signature that tells you about the neutrino.”

As Formaggio explains it, when a radioactive atom such as tritium decays, it turns into an isotope of helium and, in the process, also releases an electron and a neutrino. The energy of all particles released adds up to the original energy of the parent neutron. Measuring the energy of the electron, therefore, can illuminate the energy — and consequently, the mass — of the neutrino.

Scientists agree that tritium, a radioactive isotope of hydrogen, is key to obtaining a precise measurement: As a gas, tritium decays at such a rate that scientists can relatively easily observe its electron byproducts.

Researchers in Karlsruhe, Germany, hope to measure electrons in tritium using a massive spectrometer as part of an experiment named KATRIN (Karlsruhe Tritium Neutrino Experiment). Electrons, produced from the decay of tritium, pass through the spectrometer, which filters them according to their different energy levels. The experiment, which is just getting under way, may obtain measurements of single electrons, but at a cost.

“In KATRIN, the electrons are detected in a silicon detector, which means the electrons smash into the crystal, and a lot of random things happen, essentially destroying the electrons,” says Daniel Furse, a graduate student in physics, and a co-author on the paper. “We still want to measure the energy of electrons, but we do it in a nondestructive way.”

The group’s setup has an additional advantage: size. The detector essentially fits on a tabletop, and the space in which electrons are detected is smaller than a postage stamp. In contrast, KATRIN’s spectrometer, when delivered to Karlsruhe, barely fit through the city’s streets.

Furse and Formaggio’s detector — an experiment called “Project 8” — is based on a decades-old phenomenon known as cyclotron radiation, in which charged particles such as electrons emit radio waves in a magnetic field. It turns out electrons emit this radiation at a frequency similar to that of military radio communications.

“It’s the same frequency that the military uses — 26 gigahertz,” Formaggio says. “And it turns out the baseline frequency changes very slightly if the electron has energy. So we said, ‘Why not look at the radiation [electrons] emit directly?’”

Formaggio and former postdoc Benjamin Monreal, now an assistant professor of physics at UCSB, reasoned that if they could tune into this baseline frequency, they could catch electrons as they shot out of a decaying radioactive gas, and measure their energy in a magnetic field.

“If you could measure the frequency of this radio signal, you could measure the energy potentially much more accurately than you can with any other method,” Furse says. “The problem is, you’re looking at this really weak signal over a very short amount of time, and it’s tough to see, which is why no one has ever done it before.”

It took five years of fits and starts before the group was finally able to build an accurate detector. Once the researchers turned the detector on, they were able to record individual electrons within the first 100 milliseconds of the experiment — although the analysis took a bit longer.

“Our software was so slow at processing things that we could tell funny things were happening because, all of a sudden, our file size became larger, as these things started appearing,” Formaggio recalls.

He says the precision of the measurements obtained so far in krypton gas has encouraged the team to move on to tritium — a goal Formaggio says may be attainable in the next year or two — and pave a path toward measuring the mass of the neutrino.

Steven Elliott, a technical staff member at Los Alamos National Laboratory, says the group’s new detector “represents a very significant result.” In order to use the detector to measure the mass of a neutrino, Elliott adds, the group will have to make multiple improvements, including developing a bigger cell to contain a larger amount of tritium.

“This was the first step, albeit a very important step, along the way to building a next-generation experiment,” says Elliott, who did not contribute to the research. “As a result, the neutrino community is very impressed with the concept and execution of this experiment.”

This research was funded in part by the Department of Energy and the National Science Foundation.

UPI reporter Brooks Hays writes that a team of MIT researchers has developed a tabletop device that can detect electrons and could potentially be used discover the mass of neutrinos. “Researchers recently used the device to observe the behavior of more than 100,000 electrons from decaying krypton gas,” Hays writes.

MIT researchers have developed a new detector that can identify individual neutrons, reports Brid-Aine Parnell for Forbes. “While being able to spot an electron with such a small detector is major step forward in itself, it also takes the team further down the road of being able to measure the mass of a neutrino,” Parnell writes.

Finding a piece of the proton-spin puzzle