Finding a piece of the proton-spin puzzle 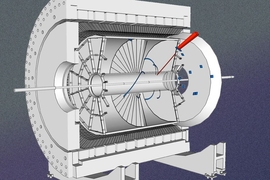 ↓ Download Image
Caption: The STAR detector, used in the researchers' experiment, measures the energy and angle of the electron from the W boson decay produced in the proton collision.
Credits: Photo courtesy of STAR Collaboration

Caption:
The STAR detector, used in the researchers' experiment, measures the energy and angle of the electron from the W boson decay produced in the proton collision.
Credits:
Photo courtesy of STAR Collaboration

What causes a proton to spin?

This fundamental question has been a longstanding mystery in particle physics, although it was once thought that the answer would be fairly straightforward: The spin of a proton’s three subatomic particles, called quarks, would simply add up to produce its total spin.

But a series of experiments in the 1980s threw this theory for a loop, proving that the spins of the quarks are only partially responsible for the proton’s overall spin. Thus emerged what physicists now refer to as the “proton spin crisis,” prompting a decades-long search for the missing pieces, or contributors, to a proton’s spin.

Now an international team of more than 300 researchers, including MIT physicists, has placed new constraints on the spin of the proton’s antiquarks — the antiparticles of quarks that are thought to arise when the bonds between quarks break. The researchers say these measurements may help to identify the antiquark’s role in the proton’s spin, as well as the mechanism by which antiquarks are produced.

“We’d like to understand the spin contributions of the subatomic particles inside the proton, to learn something fundamental about their interactions,” says Justin Stevens, a postdoc in MIT’s Laboratory for Nuclear Science (LNS). “Now we have a new method sensitive to the antiquark spin, which can shed light on where these quarks and antiquarks come from.”

Stevens and Jan Balewski, a research scientist in the LNS, led the analysis of more than 1 billion recorded proton collisions produced by the Relativistic Heavy Ion Collider (RHIC), a particle accelerator at Brookhaven National Laboratory. Using the facility’s STAR detector, which tracks the particles produced by each collision, the team identified 3,500 proton collisions that produced a W boson — an elementary particle that, when generated, temporarily inherits the spin of a proton’s antiquark.

Stevens, Balewski, and their collaborators publish their experimental results today in the journal Physical Review Letters.

According to the Standard Model of particle physics, the proton is a composite particle composed of three quarks, each of a distinct type, or “flavor”: two “up” quarks, and one “down” quark. These quarks are bound together by particles called gluons which, when temporarily broken, are thought to give rise to pairs of short-lived quarks and antiquarks. Since a proton’s spin cannot be fully explained by the spin of its quarks, physicists have looked to other possible contributors, such as the spins of gluons and antiquarks, or their orbital motion inside the proton.

“When they show up, the spin of the proton is passed to those antiquarks to some degree,” Balewski says. “Now this antiquark, for a fraction of a second, shows up in the proton exactly at the moment when this proton collides with this other proton, and the W boson is produced.”

“The naive picture of how these quark/antiquark pairs pop in and out of existence is that gluons split to form these pairs,” Stevens says. “But if that were the case, you’d expect to get equal numbers of up- and down-flavored quarks. Our measurements provide some new information, which could tell us something about how these quarks and antiquarks are produced.”

Marco Stratmann, a staff scientist at the Institute for Theoretical Physics at the University of Tubingen, says the group’s data “provide us with ‘snapshots’ of the proton’s spin and flavor structure. … In [future] analyses of the proton’s spin structure, this data will provide a novel and particularly clean probe of the up and down antiquark polarizations, largely free of theoretical uncertainties.”

“We’re tightening up the constraints on what this antiquark polarization looks like,” Stevens says. “And with future data, that constraint will get even better.”

This research was supported in part by the National Science Foundation and the U.S. Department of Energy.