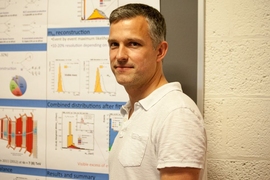 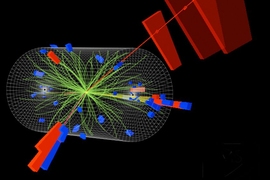 ↓ Download Image
Caption: A search for the standard-model Higgs boson decaying to tau-lepton pairs is performed using events recorded by the CMS experiment at the LHC in 2011 and 2012 at a center-of-mass energy of 7 and 8 TeV respectively. Shown here is the HTauTau VBF candidate event display.
Credits: Image courtesy of Monica Vazquez Acosta/CERN

Caption:
A search for the standard-model Higgs boson decaying to tau-lepton pairs is performed using events recorded by the CMS experiment at the LHC in 2011 and 2012 at a center-of-mass energy of 7 and 8 TeV respectively. Shown here is the HTauTau VBF candidate event display.

Fresh evidence that a new particle discovered in 2012 is the Higgs boson has been unveiled today by an international collaboration that includes researchers from MIT.

The findings, by the Compact Muon Solenoid (CMS) experiment and published in the journal Nature Physics, confirm that the bosons decay to fermions — a group of particles that includes all leptons and quarks — as predicted by the Standard Model of particle physics.

“This is an enormous breakthrough,” says Markus Klute, an assistant professor of physics at MIT and leader of the international effort. “Now we know that particles like electrons get their mass by coupling to the Higgs field, which is really exciting.”

In July 2012 researchers from the ATLAS and CMS experiments at CERN, the European Organization for Nuclear Research, revealed that they had observed a new particle in the mass region of 125 to 126 gigaelectronvolts (GeV).

Preliminary studies revealed that the new particle’s properties were consistent with those predicted for the Higgs boson by the Standard Model, but much more work was needed to confirm this. In particular, researchers wanted to clarify whether there was a single Higgs or many different Higgs particles, as predicted by various extensions of the Standard Model, Klute says.

“What we are trying to do is establish whether this particle is really consistent with the Higgs boson, the particle we predict in our Standard Model, and not one of many Higgs bosons, or an imposter that looks like it but has a different origin,” he says.

Previous analysis of the data produced by experiments at CERN’s Large Hadron Collider, near Geneva in Switzerland, has shown that like the Higgs boson of the Standard Model, the new particles have no spin, and rapidly decay by splitting into pairs of photons, W bosons, or Z bosons. But it remained uncertain whether they could also decay to fermion pairs, Klute says.

Now the team from the CMS Collaboration has demonstrated that the bosons also decay to fermions in a way that is consistent with the Standard Model Higgs.

“We have now established the main characteristics of this new particle, in its coupling to fermions and to bosons, and its spin-parity structure; all of these things are consistent with the Standard Model,” Klute says.

To determine whether the particles could decay to fermions, the researchers fired protons at each other in a 6-meter-diameter solenoid and used specialized detectors to determine which particles were produced in the resulting collisions.

The researchers were hunting for particles called tau leptons, which have a mass of around 1.7 GeV, making them around 3,500 times heavier than their little sibling, the electron. They chose tau leptons because the strength of a particle’s coupling with the Higgs field is dependent on its mass. This means that decay to a heavier particle, such as a tau lepton, will be much easier to spot than decay to a lighter one, such as an electron.

They were able to confirm the presence of decay to tau leptons with a confidence level of 3.8 standard deviations — a one in 10,000 chance that the signal they saw would have appeared if there were no Higgs particles.

To confirm the finding, the team plans to increase this to a confidence level of five standard deviations — or a one in nearly 2 million chance — once the LHC restarts particle collisions in 2015. The LHC is currently in shutdown mode while researchers work on the facility, including upgrading the available energy for collisions from 8 teraelectronvolts (TeV) to 13 TeV. This will allow the team to accumulate much more data and produce more accurate results, Klute says.

“Within the current level of precision there is still room for other models with particles that look like the Standard Model Higgs, so we need to accumulate more data to figure out if there is a deviation,” Klute says. “Although if we do find a deviation from the Standard Model, it is likely to be a very closely related one,” he adds.

Once the LHC begins operating again in 2015, collision experiments will go on for another three years, Klute says. “At the end of that time we might have some indications for physics beyond the Standard Model. This period will be extremely interesting.”

Tejinder Virdee, a professor of physics at Imperial College London who is a member of the CMS Collaboration but who was not involved in this measurement, says that physicist Stephen Weinberg’s famous paper of 1967, which lay the foundations for the Standard Model, first pointed out that the Higgs mechanism not only generates masses for the weak force carriers, such as W and Z bosons, but also for fermions, the fundamental matter particles.

As a result, it is vital to establish whether the recently discovered Higgs boson couples to fermions, and so behaves as described in the Standard Model, he says: “This CMS paper provides clear evidence for the coupling to tau leptons and, more generally, fermions.”