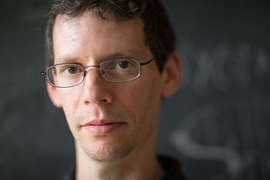 Most people’s childhood memories of time spent with their fathers might involve practicing their swing in the park or going to see the big game. But for Larry Guth, a professor of mathematics at MIT, his fondest memories are of sitting with his father, talking about mathematics and physics.

Guth’s father is Alan Guth, the Victor F. Weisskopf Professor of Physics at MIT, and the originator of the theory of cosmic inflation, which describes the rapid expansion of the universe following the Big Bang, caused by a repulsive gravitational force.

As a teenager, Guth found his father’s theoretical physics difficult to understand, but he enjoyed discussing math problems with him. “We’d be talking about a particular question and I might describe an idea about it, and it would be a good idea but I would be very messy and write one thing on one part of the page and then one thing in another corner, and you really had to be with it to understand what I was talking about,” Guth says. “So he would very systematically write it down line by line, and then you could see what I was talking about.”

Now teaching at MIT, Guth tries to encourage his students to follow the same simple, systematic approach to their work. “We both really enjoy teaching, and the way [my father] approached problems back then is how I like to go about explaining things to my students now,” he says.

Guth moved to MIT as a graduate student, where he began studying geometry under the supervision of mathematics professor Tomasz Mrwoka. In particular, he became interested in different ways to describe the size of shapes. “If you have a rectangle, for example, everyone knows that you should describe its length and its width,” he says. “But then suppose you just have some unknown region, and you would like to describe to someone its shape in just a few numbers. Is there something like the length, or the width, that makes an arbitrary shape?”

It turns out that there is. The length of any arbitrary shape is the longest distance between two points in the region, while the width describes how far you would have to travel — starting from any point in the region — to get out of it, Guth says. “So in this way you can generalize these familiar notions of length and width as a way of describing arbitrary shapes, and then you can start to ask questions like, ‘Is there a shape with a particular set of parameters? Is there a shape whose width is larger than its length — although that sounds weird and counterintuitive?’”

After completing his PhD, Guth moved as a postdoc to Stanford University, where he originated some questions in geometry concerning “area-contracting putty,” or the manipulation of jellylike blobs with unusual physical properties into different shapes and dimensions.

More recently, his research focus has been on combinatorics, or the study of discrete structures, and how sets of lines intersect each other in space. In particular he has devoted a great deal of effort to the so-called “Kakeya problem,” considering how cylinders in space can overlap each other, where he has been able to use tricks from his background in geometry to help simplify the problem.

He also studies harmonic analysis, investigating how sound waves interact with each other. So for example, when a bell rings and the sound waves spread out, they form a sphere of high pressure around the instrument — which is, in turn, surrounded by a larger, concentric sphere of low pressure. These regions of high and low pressure continue to alternate as they spread out from the bell. “Now imagine there is a really complex device producing the sound, which you could model as 1 million bells, each producing these waves with high- and low-pressure regions,” Guth says.

Where regions of high and low pressure meet, the two typically cancel each other out, he says. “So the kind of problem I’m interested in is estimating how often that happens: Are there some configurations [of sound waves] where there is not so much cancellation?”

The play’s the thing

Outside of his research, Guth has always enjoyed acting, and he regularly invites friends over to read plays aloud together. Not only does it provide a release from the frustrations of studying complex problems, but it also has pleasing similarities with mathematics, he says.

“Math has this perception of being forbiddingly complicated, which there is some truth to,” Guth says. “But on the other hand we are interested in simple things that people could take for granted, like numbers, circles, and lines, and so there is an element to math of not taking these things for granted and being more interested in them than the average bear.”

Similarly, in acting, you cannot take your character’s actions for granted, he says. “You have to think about what your character is going through and take it more seriously than you might at first sight.”

Guth still enjoys spending time with his father, discussing math and physics, and now that they are both at MIT the pair regularly meet up for lunch around campus. These days, though, it is difficult for either of them to understand the work the other does, Guth says. “We still try, but rather than explaining our own research it’s often more fun to talk about more classical problems in physics and math, which are cooler, and a little bit more accessible for both of us.”