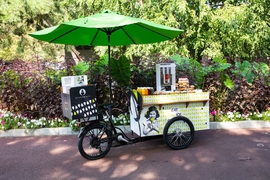 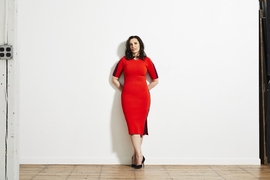 ↓ Download Image
Caption: Alchemista co-founder and CEO Christine Marcus MBA ’12 says she sold her house and dipped into her retirement savings to get the company off the ground.
Credits: Image courtesy of Alchemista

Caption:
Alchemista co-founder and CEO Christine Marcus MBA ’12 says she sold her house and dipped into her retirement savings to get the company off the ground.
Credits:
Image courtesy of Alchemista

Christine Marcus MBA ’12 was an unlikely entrepreneur in 2011. That year, after spending her entire, 17-year career in government, most recently as the deputy chief financial officer for the U.S. Department of Energy, she entered the MIT Sloan School of Management Fellows MBA Program.

Moreover, Marcus didn’t think of herself as an entrepreneur.

“That was the furthest thing from my mind,” she says. “I knew it was time to think about the private sector, but my plan was to leave Sloan and get a job in finance. The thought of entrepreneurship was nowhere in my mind. I wasn’t one of those people who came with a business idea.”

By the end of Sloan’s intensive, 12-month program, however, Marcus was running a startup helping local organizations and companies serve food from some of Boston’s best restaurants to hundreds of people. Upon graduation, in addition to her degree, Marcus had 40 recurring customers and had sold about $50,000 worth of food from her classmates’ Italian restaurant.

What happened to spark such a dramatic change?

“MIT happened,” Marcus says. “Being in that ecosystem and listening to all the people share their stories of starting companies, listening to CEOs talk about their successes and failures, the mistakes they’ve made along the way, that was super-inspiring. What I realized at MIT was that I’ve always been an entrepreneur.”

In the years since graduation, Marcus has used her new perspective to build Alchemista, a “high-touch” hospitality company that helps businesses, commercial real estate developers, and property owners provide meals to employees and tenants. Today, Alchemista has clients in Boston, New York City, and Washington, and serves more than 60,000 meals each month.

The company’s services go beyond simply curating restaraunts on a website: Each one of Alchemista’s clients has its own representative that customizes menus each month, and Alchemista employees are on the scene setting up every meal to ensure everything goes smoothly.

“We work with companies that focus on employee culture and invest in their employees, and we incorporate ourselves into that culture,” Marcus says.

At first, all Marcus wanted from MIT were some bright new employees for the Department of Energy. During a recruiting trip for that agency in 2011, she met Bill Aulet, the managing director of the Martin Trust Center for MIT Entrepreneurship and professor of the practice at Sloan.

“I mentioned to Bill that I was thinking of doing an MBA,” Marcus remembers. “He said, ‘You need to come to MIT. It will transform your life.’ Those were his exact words. Then basically, ‘And you need to do it now.’”

Soon after that conversation, Marcus applied for the Sloan Fellows Program, which crams an MBA into one year of full-time, hands on work. A few weeks after being accepted, she left her lifelong career in government for good.

But Marcus still had no plans to become an entrepreneur. That came more gradually at Sloan, as she listened to experts describe entrepreneurship as a learnable craft, received encouragement and advice from professors, and heard from dozens of successful first-time entrepreneurs about their own early doubts and failures.

“A lot of these founders had backgrounds in things that had nothing to do with their industry,” Marcus says. “My question was always, ‘How do you become successful in an industry you don’t know anything about?’ Their answer was always the same: ‘It’s all about learning and being curious.’”

During one typically long day in the MBA program, a classmate brought in food from his Italian restaurant. Marcus was blown away and wondered why MIT didn’t cater from nice restaurants like that all the time.

The thought set in motion a process that has never really stopped for Marcus. She began speaking with office secretaries, club presidents, and other event organizers at MIT. She learned it was a nightmare ordering food for hundreds of people, and that many of Boston’s best restaurants had no means of connecting with such organizers.

“I made myself known on campus just hustling,” Marcus remembers. “First I had to spend time figuring out who orders food. … I made it my mission to talk to all of them, understand their pain points, and understand what would get them to change their processes at that point. It was a lot of legwork.”

Marcus moved into the entrepreneurial track at Sloan, and says one of her most helpful classes was tech sales, taught by Lou Shipley, who’s now an advisor for Alchemista. She also says it was helpful that professors focused on real-world problems, at some points even using Alchemista as a case study, allowing Marcus’s entire class to weigh in on problems she was grappling with.

“That was super-helpful, to have all these smart MIT students working on my company,” she says.

As she neared gradation, Marcus spent a lot of time in the Trust Center, and leaned heavily on MIT’s support system.

“That’s the best thing about MIT: the ecosystem,” Marcus says. “Everybody genuinely wants to help however they can.”

Leaving that ecosystem, which Marcus described as a “challenging yet safe environment,” presented Marcus with her biggest test yet.

At some point, every entrepreneur must decide if they’re passionate and confident enough in their business to fully commit to it. Over the course of a whirlwind year, MIT gave Marcus a crash course in entrepreneurship, but it couldn’t make that decision for her.

Marcus responded unequivocally. She started by selling her house in Washington and renting a one-bedroom apartment in Boston. She also says she used up her retirement savings as she worked to expand Alchemista’s customer base in the early days.

“I’m not sure I would recommend it to anyone without a strong stomach, but I jumped in with both feet,” Marcus says.

And MIT never stopped lending support. At the time, Sloan was planning to renovate a building on campus, so in the interim, Aulet started a coworking space called the MIT Beehive. Marcus worked out of there for more than a year, collaborating with other MIT startup founders and establishing a supportive network of peers.

Her commitment paid off. By 2014, Marcus had a growing customer base and a strong business model based on recurring revenue from large customer accounts. Alchemista soon expanded to Washington and New York City.

Last year, the company brought on a culinary team and opened its own kitchens. It also expanded its services to commercial property owners and managers who don’t want to give up leasing space for a traditional cafeteria or don’t have restaurants nearby.

Marcus has also incorporated her passion for sustainability into Alchemista’s operations. After using palm leaf plates for years, the company recently switched over to reusable plates and utensils, saving over 100,000 tons of waste annually, she says.

Ultimately, Marcus thinks Alchemista’s success is a result of its human-centered approach to helping customers.

“It’s not this massive website where you place an order and have no contact,” Marcus says. “We’re the opposite of that. We’re high-touch because everyone else is a website or app. Simply put, we take all the headaches away from ordering for hundreds of people. Food is very personal; breaking bread is one of the most fundamental ways to connect with others. We provide that experience in a premium, elevated way.”

Times Higher Education ranks MIT No. 1 university worldwide for economics and business for 2020

Creating a network of drivers to lift a community