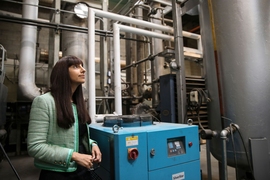 ↓ Download Image
Caption: Renewlogy co-founder and CEO Priyanka Bakaya inside one of the company's commercial plants, which are capable of processing ten tons of plastic each day to create about 60 barrels of fuel.
Credits: Courtesy of Renewlogy 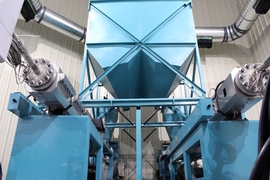 ↓ Download Image
Caption: An image of one of Renewlogy's conversion machines. Plastics entering Renewlogy’s system are first shredded, then put through a chemical reformer, where a catalyst degrades their long carbon chains. Roughly 15 to 20 percent of those chains are converted into hydrocarbon gas that Renewlogy recycles to heat the system. Five percent turns into char, and the remaining 75 percent is converted into high-value fuels.
Credits: Courtesy of Renewlogy

Caption:
Renewlogy co-founder and CEO Priyanka Bakaya inside one of the company's commercial plants, which are capable of processing ten tons of plastic each day to create about 60 barrels of fuel.
Credits:
Image courtesy of Renewlogy

Caption:
An image of one of Renewlogy's conversion machines. Plastics entering Renewlogy’s system are first shredded, then put through a chemical reformer, where a catalyst degrades their long carbon chains. Roughly 15 to 20 percent of those chains are converted into hydrocarbon gas that Renewlogy recycles to heat the system. Five percent turns into char, and the remaining 75 percent is converted into high-value fuels.
Credits:
Image courtesy of Renewlogy

It’s been nearly 10 years since Priyanka Bakaya MBA ’11 founded Renewlogy to develop a system that converts plastic waste into fuel. Today, that system is being used to profitably turn even nonrecyclable plastic into high-value fuels like diesel, as well as the precursors to new plastics.

Since its inception, Bakaya has guided Renewlogy through multiple business and product transformations to maximize its impact. During the company’s evolution from a garage-based startup to a global driver of sustainability, it has licensed its technology to waste management companies in the U.S. and Canada, created community-driven supply chains for processing nonrecycled plastic, and started a nonprofit, Renew Oceans, to reduce the flow of plastic into the world’s oceans.

The latter project has brought Bakaya and her team to one of the most polluted rivers in the world, the Ganges. With an effort based in Varanasi, a city of much religious, political, and cultural significance in India, Renew Oceans hopes to transform the river basin by incentivizing residents to dispose of omnipresent plastic waste in its “reverse vending machines,” which provide coupons in exchange for certain plastics.

Each of Renewlogy’s initiatives has brought challenges Bakaya never could have imagined during her early days tinkering with the system. But she’s approached those hurdles with a creative determination, driven by her belief in the transformative power of the company.

“It’s important to focus on big problems you’re really passionate about,” Bakaya says. “The only reason we’ve stuck with it over the years is because it’s extremely meaningful, and I couldn’t imagine working this hard and long on something if it wasn’t deeply meaningful.”

A system for sustainability

Bakaya began working on a plastic-conversion system with Renewlogy co-founder and Chief Technology Officer Benjamin Coates after coming to MIT’s Sloan School of Management in 2009. While pursuing his PhD at the University of Utah, Coates had been developing continuously operating systems to create fuels from things like wood waste and algae conversion.

One of Renewlogy’s key innovations is using a continuous system on plastics, which saves energy by eliminating the need to reheat the system to the high temperatures necessary for conversion.

Today, plastics entering Renewlogy’s system are first shredded, then put through a chemical reformer, where a catalyst degrades their long carbon chains.

Roughly 15 to 20 percent of those chains are converted into hydrocarbon gas that Renewlogy recycles to heat the system. Five percent turns into char, and the remaining 75 percent is converted into high-value fuels. Bakaya says the system can create about 60 barrels of fuel for every 10 tons of plastic it processes, and it has a 75 percent lower carbon footprint when compared to traditional methods for extracting and distilling diesel fuel.

In 2014, the company began running a large-scale plant in Salt Lake City, where it continues to iterate its processes and hold demonstrations.

Since then, Renewlogy has set up another commercial-scale facility in Nova Scotia, Canada, where the waste management company Sustane uses it to process about 10 tons of plastic a day, representing 5 percent of the total amount of solid waste the company collects. Renewlogy is also building a similar-sized facility in Phoenix, Arizona, that will be breaking ground next year. That project focuses on processing specific types of plastics (identified by international resin codes 3 through 7) that are less easily recycled.

In addition to its licensing strategy, the company is spearheading grassroots efforts to gather and process plastic that’s not normally collected for recycling, as part of the Hefty Energy Bag Program.

Through the program, residents in cities including Boise, Idaho, Omaha, Nebraska, and Lincoln, Nebraska, can put plastics numbered 4 through 6 into their regular recycling bins using special orange bags. The bags are separated at the recycling facility and sent to Renewlogy’s Salt Lake City plant for processing.

The projects have positioned Renewlogy to continue scaling and have earned Bakaya entrepreneurial honors from the likes of Forbes, Fortune, and the World Economic Forum. But a growing crisis in the world’s oceans has drawn her halfway across the world, to the site of the company’s most ambitious project yet.

Of the millions of tons of plastic waste flowing through rivers into the world’s oceans each year, roughly 90 percent comes from just 10 rivers. The worsening environmental conditions of these rivers represents a growing global crisis that state governments have put billions of dollars toward, often with discouraging results.

Bakaya believes she can help.

“Most of these plastics tend to be what are referred to as soft plastics, which are typically much more challenging to recycle, but are a good feedstock for Renewlogy’s process,” she says.

Bakaya started Renew Oceans as a separate, nonprofit arm of Renewlogy last year. Since then, Renew Oceans has designed fence-like structures to collect river waste that can then be brought to its scaled down machines for processing. These machines can process between 0.1 and 1 ton of plastic a day.

Renew Oceans has already built its first machine, and Bakaya says deciding where to put it was easy.

From its origins in the Himalayas, the Ganges River flows over 1,500 miles through India and Bangladesh, serving as a means of transportation, irrigation, energy, and as a sacred monument to millions of people who refer to it as Mother Ganges.

Renewlogy’s first machine is currently undergoing local commissioning in the Indian city of Varanasi. Bakaya says the project is designed to scale.

“The aim is to take this to other major polluted rivers where we can have maximum impact,” Bakaya says. “We’ve started with the Ganges, but we want to go to other regions, especially around Asia, and find circular economies that can support this in the long term so locals can derive value from these plastics.”

Scaling down their system was another unforeseen project for Bakaya and Coates, who remember scaling up prototypes during the early days of the company. Throughout the years, Renewlogy has also adjusted its chemical processes in response to changing markets, having begun by producing crude oil, then moving to diesel as oil prices plummeted, and now exploring ways to create high-value petrochemicals like naphtha, which can be used to make new plastics.

Indeed, the company’s approach has featured almost as many twists and turns as the Ganges itself. Bakaya says she wouldn’t have it any other way.

“I’d really encourage entrepreneurs to not just go down that easy road but to really challenge themselves and try to solve big problems — especially students from MIT. The world is kind of depending on MIT students to push us forward and challenge the realm of possibility. We all should feel that sense of responsibility to solve bigger problems.”