Creating a network of drivers to lift a community 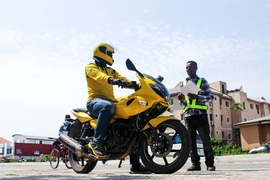 ↓ Download Image
Caption: Nigerian mobility startup Max NG is trying to formalize the delivery and transportation industries of West Africa. Each of the company's mototaxi drivers go through extensive training on basic traffic rules, strategies for driving in inclement weather, and defensive driving tactics. They also must pass a background check, and every bike is tracked to deter crime and poor driving.
Credits: Courtesy of Max NG

Caption:
Nigerian mobility startup Max NG is trying to formalize the delivery and transportation industries of West Africa. Each of the company's mototaxi drivers go through extensive training on basic traffic rules, strategies for driving in inclement weather, and defensive driving tactics. They also must pass a background check, and every bike is tracked to deter crime and poor driving.
Credits:
Courtesy of Max NG

Finding success in a big, informal market of a developing country is a tall task for any new company — which makes Nigerian mobility startup Max NG’s success all the more distinctive. The company is currently disrupting not just one huge market of West Africa, but two.

In the four years since its founding, Max NG has created a network of motorcycle drivers — currently 1,500 and projected to double by year’s end — that perform both package deliveries and transportation services for residents in cities including Lagos, the Nigerian metropolis with nearly three times as many people as New York City.

By the end of next year, Max NG’s founders hope to be operating in three or four countries, with about 20,000 drivers on their platform. To help realize its ambitious projections, the company has already secured partnerships with the likes of Yamaha, Mastercard, and the e-commerce giant Jumia.

“The mototaxi industry and the tuk tuk industry are extremely popular, but they’re informal in the West Africa region,” co-founder Adetayo Bamiduro MBA ’15 says, referring to the three-wheeled, hooded rickshaws known as tuk tuks that Max NG drivers have also begun using. “Across West Africa, there’s about 12 million to 15 million mototaxi drivers, so Max has a huge opportunity to formalize this industry.”

Max NG is also pushing the delivery and transportation industries forward as it seeks to stand out amid increasing competition. Bamiduro, who founded the company with Chinedu Azodoh MFin ’15, says Max NG recently developed the first locally assembled electric motorcycle in West Africa and will be deploying 500 such vehicles, along with charging stations, next year.

The initiative to electrify comes on top of the founders’ core commitment to make the industries safer, part of a wider emphasis on looking beyond the business opportunity and focusing on the impact the company has on the tens of thousands of people who benefit from its services.

Bamiduro thinks a lot about the woman working late who is now able to use a vetted, trained driver with an extra helmet to get home. He also thinks a lot about Max NG’s drivers — the company refers to them as champions — who he says experience an improved standing in their communities to go along with a bigger paycheck.

“A huge chunk of the population relies on this industry to get by, so it’s really important just from the sense of jobs,” Bamiduro says. “But it’s also a dangerous industry because of the lack of structure. It’s a big economic opportunity, but also a big opportunity for impact.”

The coastal city of Lagos, Nigeria, with its burgeoning skyline and rapidly growing economy, is home to more than 21 million people. The city is also one of the most congested in the world, with commuters spending an average of 30 hours per week stuck in traffic. Bamiduro says some people spend up to 70 percent of their work hours trapped in the city’s gridlocked, underdeveloped roadways.

In response to this problem, people rely on informal mototaxis that come with their own problems. The vast majority of these informal drivers — Bamiduro says 98 percent — don’t wear helmets or provide them to passengers. Someone getting onto the back of a bike can’t tell if a driver is well-trained or if they will even obey traffic rules. Riders also risk being kidnapped or becoming the victim of some other crime in the city, a large chunk of which is perpetuated by people on motorcycles.

Max NG provides its drivers with a pair of high-quality helmets, distinctive yellow jackets, and new bikes, which it can loan drivers who enter one-year repayment plans. Each driver goes through extensive training on basic traffic rules, strategies for driving in inclement weather, and defensive driving tactics. They also must pass a background check, and every bike is tracked to deter crime and poor driving.

To order a ride, users can go through Max NG’s app, call the company’s service center, or simply flag down a free driver on the street. Cash and credit cards are accepted so people without smartphones or bank accounts can also benefit from the service.

“Max makes it super easy to dash across town very quickly in a safe, affordable, and efficient way,” Bamiduro says.

Bamiduro and Azodoh, who are both from Nigeria, entered MIT’s Sloan School of Management in 2013 and 2014, respectively. They started Max NG as a motorcycle delivery company in the beginning of 2015, participating in MIT’s IDEAS Global Challenge, the MIT $100K pitch competition, the Venture Mentoring Service, and receiving extensive support from the Martin Trust Center for MIT Entrepreneurship. Bamiduro was also a fellow at the Legatum Center at MIT.

“We took full advantage of the MIT entrepreneurship ecosystem and resources that were available while we were there,” Bamiduro recalls.

While still pursuing their degrees, they developed a mobile software tool that let people enter their pickup and drop off points and connect with drivers. Working on the project in Sloan's New Enterprises course, the founders were able to get three e-commerce companies, including Jumia, which went public on the New York Stock Exchange earlier this year, to commit to using their service.

By the summer of 2017, the company was helping a network of motorcycle drivers complete 500 deliveries per day throughout Lagos, enabling customers to receive same-day delivery. That’s when the company began piloting its transportation solution.

Today, Max NG’s employees are benefiting from the company’s success as much as its customers. Bamiduro says drivers make three times more money driving for Max NG compared to working as independent drivers. They also get access to high quality equipment, accident insurance, and the backing of an organized community.

“In a market like Nigeria, where there are not a lot of protection systems built for the lower class, driving for Max is their ticket out of the wild wild west, where no one is looking out for you and you don’t belong to any organized system,” Bamiduro says. “You also ride a plaid motorcycle and you wear a plaid jacket, and that improves the level of dignity you enjoy out there, because then people know you are part of a formal organization committed to quality. One of the things drivers tell us they like most often is the dignity of the work.”

Earlier this year, Max NG made a splash when it raised $7 million in a funding round that included motorcycle manufacturer Yamaha. But Bamiduro says the company is already in talks to raise another, much larger funding round by the middle of next year.

The money will help the company build out charging infrastructure for its new electric fleet and help finance motorcycle purchasing agreements for a growing pool of drivers. The plan is to not only lift up the company, but also to improve West Africa’s infrastructure in the process.

“We’re building infrastructure to provide energy and mobility in West African cities, and we’re also partnering with established players like local banks and Mastercard to build more robust payment infrastructure for that mobility,” Bamiduro says. “We and other startups are at the forefront of building basic infrastructure that’s required to deliver critical services in mobility, financial services, energy, agriculture, health care in the region today.”

Homegrown help: Seeding a culture of innovation in Nigeria

A community for African students at MIT