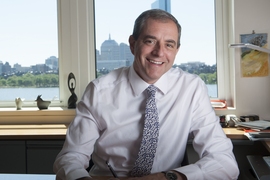 MIT economist David Autor made news in January, when he delivered the prestigious Richard T. Ely Lecture at the annual meeting of the American Economic Association and presented an attention-grabbing finding about the U.S. economy. Cities no longer provide an abundance of middle-skill jobs for workers without college degrees, he announced, based on his own careful analysis of decades of federal jobs data, which he scrutinized by occupation, location, and more. MIT News talked to Autor, the Ford Professor of Economics at MIT, about how this sea change is responsible for much of the “hollowing out” of the middle-class work force, and overall inequality, in the U.S. This interview has been edited for length.

Q: Your new research says that changes in the jobs available in cities has played a big role in the growth of inequality and polarization in the U.S. But what exactly is your new finding?

A: There’s a lot of economic literature that says, “Cities are where all the action is.” Wages are higher in cities; people flock to cities. I’ve been writing about the polarization of occupations for a long time, and the hollowing out of the middle class and the geography of that, but I always imagined that polarization reflected a time when the middle-skill jobs had been robustly present in lots of places, both urban and rural, and then hollowed out.

What I didn’t realize was the degree to which [overall U.S.] job polarization is an unwinding of a distinctive feature of high-density metro areas, which was highly present in the postwar period and is now entirely gone. There were these occupations where noncollege workers did skilled work in metro areas: production work and clerical, administrative work. These were middle-skill jobs and they were much more prevalent in cities, urban areas, and metro areas than they were in suburbs and rural areas. But that began to decline in the 1970s and is now extinct. There’s nothing remaining of that.

There’s just less and less mixing of high-skill and low-skill workers, because their jobs are no longer complementary. They’re no longer producing stuff jointly together.

Q: Why were these jobs in cities in the first place?

A:  Two reasons. One is, historically, manufacturing was an urban phenomenon. It had to be, because you needed access to transportation, good infrastructure, and so on. And then for clerical and administrative work, it’s because those occupations are inputs into the world of professionals, so they had to be where the high-skill professionals were.

Q:. To what extent are we talking about strictly a loss of these two types of jobs, pillars of the middle class as they once were?

A: Those are the two biggest examples, but there’s been a big decline of all routine activity. Anything that follows a set of procedures. That doesn’t describe construction work, cleaning, creative work. But you see the decline of routine work even within jobs. There are still office clerical workers, but they’re more educated than they used to be; they do harder jobs. They do a different job — coordinating events, proofing papers, dealing with those godforsaken travel receipts. There are still production workers , but their work is more abstract — they manage complex machines rather than performing repetitive motions. Those are the two leading examples and they cover a lot of the terrain, but they don’t cover all of it.

Q: What are some other implications of this research?

A: There’s this big puzzle in the United States about declining geographic mobility. People have read that as a very negative sign — the labor market is so sclerotic, nobody can afford to move — but my conjecture is that it reflects highly educated people moving to major metro areas to attend college and then staying there. Meanwhile, non-college workers have less and less of an incentive to move to expensive cities where the wage premium for urban non-professionals has fallen steeply.

I think it [job polarization] speaks to our politics. Cities are different places than they used to be. They’re much more educated now, they’re much higher-wage, and they’re younger. They were distinctive before in the set of occupations they might have, and now they’re distinctive in extreme levels of education, high levels of wages, being relatively youthful, and being extremely diverse. You can see how this creates a growing urban, non-urban divide in voting patterns.

Q: Where does your research go from here, and where do policy discussions go?

A: I think there’s a big agenda that flows from this: what it looks like across other industrialized countries, how it relates to the age structure, what the new [jobs] look like. And it raises two other sets of questions. What should you do if you’re not highly educated, what’s the right opportunity, and what’s the right place? And, two, it’s crazy how highly concentrated and expensive educated some cities are. So, is this just a black hole phenomenon? Will cities get denser and denser, or will the countervailing forces prevail? There’s a lot of opportunity for smaller and midsize cities, like Pittsburgh, Nashville, Greensboro-Spartanburg, the places saying, “Hey, we have enough skilled people and restaurants and infrastructure, why don’t you come here?”

Q: Immigration is a prominent political issue right now, and your research here examines it. What did you find?

A: Immigrants are important to this story because the education distribution of immigrants is quite bimodal: They are disproportionately likely to have a postcollege degrees but even more likely to not even have a college degree. And they are concentrated in urban areas. I initially conjectured that part of this [overall wage and polarization trend] was just an artifact of immigration. But you find it equally among immigrants and nonimmigrants, so that’s not it. Immigrants are extremely important to both the skill supply in cities and the services supply in cities, but the hollowing out is not a reflection of immigration in any direct sense.

Q: So as you’ve quantified here, there was an exceptional period in U.S. postwar history that we took as the “normal” state of things.

A: Yes. We’re talking about something that was distinctive about the urban labor market for non-college workers in the postwar era, and now it’s gone.

Speaking with Greg Rosalsky of NPR’s Planet Money, Prof. David Autor delves into his new research showing that large American cities no longer provide the same opportunities for upward mobility for people without college degrees. “The set of jobs that people without college degrees do has really contracted,” explains Autor, co-director of the MIT Work of the Future task force.

Axios reporter Steve Levine writes that a new paper by Prof. David Autor shows how, “cities, once the hope of people seeking a middle-class life, are now a symbol of the disappearance of well-paid, middle-skill work.”

Prof. David Autor speaks with Greg Rosalsky of NPR’s Planet Money about his new research on employment trends in the U.S. showing that cities are no longer meccas of opportunity for workers without college degrees. “We need to carefully examine our assumptions that superstar cities are the land of opportunity for everyone,” says Autor.

New York Times reporters Emily Badger and Quoctrung Bui highlight Prof. David Autor’s new research that shows cities do not offer workers without college educations the same economic opportunities that they did in the past. Autor found that the declining urban wage premium has been caused by the “disappearance of ‘middle-skill jobs’ in production but also in clerical, administrative and sales work.”

The Economist spotlights Prof. David Autor and graduate student Juliette Fournier’s research examining the economic prospects for Americans without college degrees. Autor and Fournier found that, “the earnings of workers without a college education have scarcely risen in 50 years, after adjusting for inflation; for men they have fallen. This stagnation coincided with tectonic changes in American employment.”

At the annual meeting of the American Economic Association, Prof. David Autor presented new research showing that middle-skill jobs for Americans without college degrees are becoming increasingly rare in dense areas, reports Jeanna Smialek and Peter Coy for Bloomberg News. “It’s not clear where the land of opportunity is for non-college adults,” says Autor.