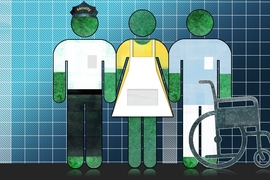 Credits:
graphic: Christine Daniloff
The widening chasm in the U.S. job market has brought many workers a long-term shift to low-skill service jobs, according to a study co-authored by an MIT economist.

The research, presented in a paper by MIT economist David Autor, along with economist David Dorn, helps add nuance to the nation’s job picture. While a widening gap between highly trained and less-trained members of the U.S. workforce has previously been noted, the current study shows in more detail how this transformation is happening in stores, restaurants, nursing homes, and other places staffed by service workers.

Specifically, workers in many types of middle-rank positions — such as skilled production-line workers and people in clerical or administrative jobs — have had to migrate into jobs as food-service workers, home health-care aides, child-care employees, and security guards, among other things.

“This polarization that we see is being driven by the movement of people out of middle-skill jobs and into services,” says Autor, a professor of economics at MIT. “The growth in service employment isn’t that large overall, but when you look at people with a noncollege education, it’s a very sharp increase, and it’s very concentrated in places that were initially specialized in the more middle-skill activities.”

Indeed, the portion of all U.S. labor hours logged by service workers grew by 30 percent between 1980 and 2005. That growth has not been enough to accommodate all the displaced workers from other industries, but it clearly is where some job-seekers have wound up: For instance, people working as machine operators and assemblers constituted 9.9 percent of U.S. labor hours in 1980, compared to 4.6 percent in 2005. Meanwhile, service occupations comprised 9.9 percent of labor hours in 1980, and are 12.9 percent today.

‘Not an improvement in job quality’

The transition to service-sector jobs presents mostly bad news — along with a bit of good news — for people making the shift. The bad news, in part, is that service-sector positions, beyond the inherent difficulties of some of the jobs, tend to come with less leverage and more insecurity for employees.

“This is not an overall improvement in job quality,” Autor observes. “The problem with many of these jobs is they require fairly generic skill sets, which means workers have limited negotiating power and are fairly interchangeable. These are not, in general, attractive jobs.”

That said, the good news is that service-sector jobs have seen surprising growth in wages since 1980: an average of 6.4 percent per decade, adjusted for inflation. That has happened despite the increased supply of workers available for service-sector jobs, which should, in theory, depress those wages.

Thus the paper also teases out an issue of interest to economic researchers, concerning the reasons for this wage increase. Autor and Dorn suggest that increased productivity has lowered the prices of some goods, allowing people to pay more for some services, such as home health care.

Additionally, after examining 700 “commuting zones” around metropolitan areas in the United States, the study also finds that the change to service-sector jobs has happened both in traditional industrial areas, such as Chicago and Detroit, and in areas with a high proportion of office jobs, such as New York and San Francisco. In both cases, technological advances have automated a significant number of existing jobs.

The paper, “The Growth of Low Skill Service Jobs and the Polarization of the U.S. Labor Market,” was published in the American Economic Review. Dorn, an economist at the Center for Monetary and Financial Studies in Madrid, is currently a visiting professor at Harvard University.

In Autor’s view, studies of this kind have clear implications for policymakers: The findings, he says, can “alert people to the changing opportunity set faced by contemporary workers. I think that is relevant to education policy and labor standards.”

For instance, he suggests, recognizing that an increasing number of workers are in the service sector might lead some policymakers to endorse regulations about hours and working standards that would help these parts of the American workforce.

“It seems like people in these jobs are treated almost gratuitously badly,” Autor says. “If you work in retail, it’s possible you won’t even know your hours until the beginning of the week. … Having uncertainty about your schedule from week to week, [when] you need to get your kids off to school, makes life that much tougher. … These jobs offer flexibility, but mostly to the employer.”

The United States, he adds, “is unusual in offering almost no standards in this type of work.” And while such standards would impose some costs on employers, Autor suggests that those trade-offs could be part of a larger debate about employment today.

The findings also feed into a larger project Autor is pursuing, about the extent to which wealth and achievement are linked from generation to generation.

In a piece for The New York Times about poverty in America, Thomas B. Edsall highlights Professor David Autor’s work examining unemployment rates of American men. Autor and graduate student Melanie Wasserman found that for boys, “growing up in a single-parent home appears to significantly decrease the probability of college attendance.”

In a piece for The New York Times, Claire Cain Miller writes about a new study showing how the recession accelerated the displacement of midwage jobs. Miller notes research by Professor David Autor highlighting the growing polarization of the workforce.

The Economist looks at the work of Professor David Autor while investigating how technological advances are influencing future employment. Autor’s research indicates that the fact that a job can be automated does not guarantee it will be and other factors, such as the cost of labor, play a role.