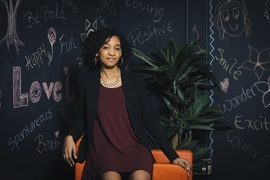 ↓ Download Image
Caption: Senior Nikayah Etienne is majoring in mechanical engineering with a concentration in education. Her aim is to identify ways to merge the two.
Credits: Image: Jake Belcher

Caption:
Senior Nikayah Etienne is majoring in mechanical engineering with a concentration in education. Her aim is to identify ways to merge the two.
Credits:
Image: Jake Belcher

Nikayah Etienne’s mother, an immigrant from the Caribbean island of Dominica, was passionate about her daughter’s education. At her mother’s insistence, Etienne spent her Saturday mornings in the classroom for additional schooling throughout middle school. She wasn’t a fan of the extra education at the time — but looking back, she thinks it paved the way for her to become the first person in her family to earn a bachelor’s degree.

Etienne grew up in a largely Caribbean neighborhood in Brooklyn, New York, and attended one of the city’s magnet high schools, where she excelled in the STEM fields. At first, it seemed everyone was telling her to become a doctor — but her calculus teacher recognized her talent for math and science, and encouraged her to consider engineering. That’s when Etienne started looking into MIT.

After her junior year of high school, she participated in the intensive Minority Introduction to Engineering and Science (MITES) program at MIT, where she stayed in Simmons Hall and attended six weeks of classes. It was there that she took her first real engineering class — underwater robotics.

“MITES definitely solidified the fact that I should pursue engineering, especially since I’m the kind of person that likes hands-on learning instead of lecture-style learning,” she says.

Now a senior, Etienne is majoring in mechanical engineering with a concentration in education. Her aim is to identify ways to merge the two.

“Right now, I’m trying to focus on learning about different equitable teaching practices and  different education technology platforms, in an effort to see the overlap between engineering and education and how it can be improved in underresourced communities,” she says.

During Etienne’s first research project at MIT, she was on a team of four in the Teaching Systems Lab analyzing online learning platforms. Basically, a group of students would join an online forum and participate in discussions. Each of these students had identified their political affinity — say, Democrat or Republican — to the researchers, but not to each other. Etienne and her team then analyzed how those students interacted.

This past January, Etienne shifted her research to be more hands-on. Through a grant from the Priscilla King Gray Public Service Center, she travelled to Dominica, her mother’s original home, to see how Hurricane Maria had impacted education there.

She spent six weeks in a school helping with a class of third graders, while observing the teaching style of the instructors, the learning style of the students, and other dynamics of the classroom. The second and third grade classes shared a UNICEF tent and were separated with a divider. Books had been lost in the hurricane, and donations had not fully restored the inventory. The instructor taught on a very small whiteboard, and there was no digital technology to speak of. Etienne noticed there weren’t a lot of hands-on learning opportunities for the students.

“That experience made me realize that I do want to introduce engineering or STEM in general to underrepresented communities, because I really saw the challenges that occurred from not having resources in schools,” she says.

Currently, Etienne has returned to the Teaching Systems Lab to work on its equity team. On one project, she assists in developing educational interfaces that train community members, law enforcement and criminal justice officials, and educators to recognize their biases and to better contextualize social media posts by young people of color experiencing violence. In her second project, she focuses on designing multimedia “practice spaces,” or immersive simulations, for teachers in training to develop equitable teaching approaches and mindsets.

Service in the school and the city

Community service plays a large role in Etienne’s life outside of her studies. In the fall of her first year, she became a counselor for Camp Kesem, a summer camp for kids whose parents are affected by cancer. In her sophomore year, she served as the treasurer for the Black Women’s Alliance, helping to plan their 50-year reunion.

Starting in the spring of her second year, she also worked for three semesters as a lab assistant for 2.678 (Electronics for Mechanical Systems), helping teach students how to build electronic systems. Additionally, Etienne served as a STEM mentor for the Office of Engineering Outreach Programs, working with a middle schooler every other Saturday on little engineering projects.

In the fall of her junior year, Etienne became an admissions ambassador, helping to identify minority students that would be great fits for the MIT community. In the spring, she was elected to be the social chair of MIT Class Awareness Support and Equality (CASE), and she currently serves as vice president of the student group.

“Now, students have a say in what initiatives get implemented for low income students. MIT’s efforts in trying to better the college experience of low income students at MIT is very transformative,” she says. “[It’s] something that’s really never been done before, or hasn’t been done to the extent that CASE has been doing, so I’m glad I’m helping with those efforts.”

This fall, Etienne joined the citywide chapter of public service sorority Delta Sigma Theta Sorority, which spans five local colleges and universities. The organization’s focus is to provide service to the black community around Cambridge, both on college campuses and to the general public. It has held food and clothing drives, educated students about AIDS on World Aids Day, and is working on holding a black-owned business pop-up shop in the future. She currently serves as the second vice president of her chapter. Etienne’s favorite part of being in this sorority is the strong sisterhood that she knows will continue to support her throughout her lifetime.

“Now I’m serving an area that is way bigger than just the realm of MIT,” she says. “So I’m really glad that I’m able to provide programming to our service schools and serve underrepresented communities around Cambridge.”

For fun, Etienne loves spending time in the city. Her preferred activities downtown include escape rooms, paint bars, and sports tournaments. An enthusiast of music and dancing, she also frequents concerts, performances, and workshops led by professional dancers. And she enjoys checking out new restaurants — her current favorite is La Fabrica in Central Square.

Whether or not she remains in the city she’s had these adventures in, Etienne aims to get some experience in the engineering industry before continuing her education.

“For right now I want the engineering experience to develop my engineering skills and mindset,” she says.

After that, she wants to go to graduate school, although she hasn’t decided exactly what type of program to apply for.

“[I’m] still deciding if I want a master’s in mechanical engineering, or in education administration. Maybe I might even go for both!” she says. “Who knows?”