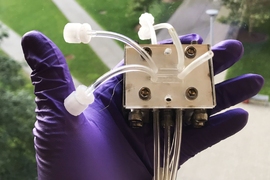 ↓ Download Image
Caption: A small-scale device, seen here, was used in the lab to demonstrate the effectiveness of the new shockwave-based system for removing radioactive contaminants from the cooling water in nuclear powerplants.
Credits: Image courtesy of the researchers 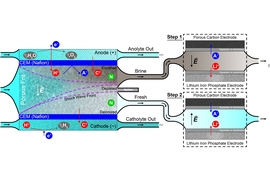 ↓ Download Image
Caption: Diagram illustrates the process, in which contaminated water enters from the left, and is subjected to an ionic shockwave (depicted by dashed purple lines) that concentrates radionuclides of cesium and cobalt on one side (darker area at top) from purified water (light-colored lower area). The clean water can be recirculated to the reactor, while the concentrated contaminants can be safely disposed of.
Credits: Image courtesy of the researchers

Caption:
A small-scale device, seen here, was used in the lab to demonstrate the effectiveness of the new shockwave-based system for removing radioactive contaminants from the cooling water in nuclear powerplants.
Credits:
Image courtesy of the researchers

Caption:
Diagram illustrates the process, in which contaminated water enters from the left, and is subjected to an ionic shockwave (depicted by dashed purple lines) that concentrates radionuclides of cesium and cobalt on one side (darker area at top) from purified water (light-colored lower area). The clean water can be recirculated to the reactor, while the concentrated contaminants can be safely disposed of.
Credits:
Image courtesy of the researchers

Nuclear power continues to expand globally, propelled, in part, by the fact that it produces few greenhouse gas emissions while providing steady power output. But along with that expansion comes an increased need for dealing with the large volumes of water used for cooling these plants, which becomes contaminated with radioactive isotopes that require special long-term disposal.

Now, a method developed at MIT provides a way of substantially reducing the volume of contaminated water that needs to be disposed of, instead concentrating the contaminants and allowing the rest of the water to be recycled through the plant’s cooling system. The proposed system is described in the journal Environmental Science and Technology, in a paper by graduate student Mohammad Alkhadra, professor of chemical engineering Martin Bazant, and three others.

The method makes use of a process called shock electrodialysis, which uses an electric field to generate a deionization shockwave in the water. The shockwave pushes the electrically charged particles, or ions, to one side of a tube filled with charged porous material, so that concentrated stream of contaminants can be separated out from the rest of the water. The group discovered that two radionuclide contaminants — isotopes of cobalt and cesium — can be selectively removed from water that also contains boric acid and lithium. After the water stream is cleansed of its cobalt and cesium contaminants, it can be reused in the reactor.

The shock electrodialysis process was initially developed by Bazant and his co-workers as a general method of removing salt from water, as demonstrated in their first scalable prototype four years ago. Now, the team has focused on this more specific application, which could help improve the economics and environmental impact of working nuclear power plants. In ongoing research, they are also continuing to develop a system for removing other contaminants, including lead, from drinking water.

Not only is the new system inexpensive and scalable to large sizes, but in principle it also can deal with a wide range of contaminants, Bazant says. “It’s a single device that can perform a whole range of separations for any specific application,” he says.

In their earlier desalination work, the researchers used measurements of the water’s electrical conductivity to determine how much salt was removed. In the years since then, the team has developed other methods for detecting and quantifying the details of what’s in the concentrated radioactive waste and the cleaned water.

“We carefully measure the composition of all the stuff going in and out,” says Bazant, who is the E.G. Roos Professor of Chemical Engineering as well as a professor of mathematics. “This really opened up a new direction for our research.” They began to focus on separation processes that would be useful for health reasons or that would result in concentrating material that has high value, either for reuse or to offset disposal costs.

The method they developed works for sea water desalination, but it is a relatively energy-intensive process for that application. The energy cost is dramatically lower when the method is used for ion-selective separations from dilute streams such as nuclear plant cooling water. For this application, which also requires expensive disposal, the method makes economic sense, he says. It also hits both of the team’s targets: dealing with high-value materials and helping to safeguard health. The scale of the application is also significant — a single large nuclear plant can circulate about 10 million cubic meters of water per year through its cooling system, Alkhadra says.

For their tests of the system, the researchers used simulated nuclear wastewater based on a recipe provided by Mitsubishi Heavy Industries, which sponsored the research and is a major builder of nuclear plants. In the team’s tests, after a three-stage separation process, they were able to remove 99.5 percent of the cobalt radionuclides in the water while retaining about 43 percent of the water in cleaned-up form so that it could be reused. As much as two-thirds of the water can be reused if the cleanup level is cut back to 98.3 percent of the contaminants removed, the team found.

While the overall method has many potential applications, the nuclear wastewater separation, is “one of the first problems we think we can solve [with this method] that no other solution exists for,” Bazant says. No other practical, continuous, economic method has been found for separating out the radioactive isotopes of cobalt and cesium, the two major contaminants of nuclear wastewater, he adds.

While the method could be used for routine cleanup, it could also make a big difference in dealing with more extreme cases, such as the millions of gallons of contaminated water at the damaged Fukushima Daichi power plant in Japan, where the accumulation of that contaminated water has threatened to overpower the containment systems designed to prevent it from leaking out into the adjacent Pacific. While the new system has so far only been tested at much smaller scales, Bazant says that such large-scale decontamination systems based on this method might be possible “within a few years.”