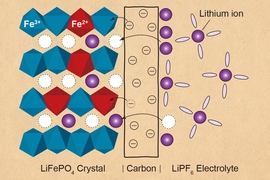 ↓ Download Image
Caption: This illustration shows a battery electrode made of lithium iron phosphate (left side of image) coated with carbon, and in contact with an electrolyte material. As the battery is discharged, lithium ions (shown in purple) jump across the coating and insert themselves into the crystal structure, while electrons (shown as circles with minus signs) in the carbon-coating tunnel into the material and attach to iron ions (shown in red). (Phosphate groups are left out of this diagram for clarity.)
Credits: Illustration courtesy of Peng Bai and Martin Bazant

Caption:
This illustration shows a battery electrode made of lithium iron phosphate (left side of image) coated with carbon, and in contact with an electrolyte material. As the battery is discharged, lithium ions (shown in purple) jump across the coating and insert themselves into the crystal structure, while electrons (shown as circles with minus signs) in the carbon-coating tunnel into the material and attach to iron ions (shown in red). (Phosphate groups are left out of this diagram for clarity.)
Credits:
Illustration courtesy of Peng Bai and Martin Bazant

The electrochemical reactions inside the porous electrodes of batteries and fuel cells have been described by theorists, but never measured directly. Now, a team at MIT has figured out a way to measure the fundamental charge transfer rate — finding some significant surprises.

The study found that the Butler-Volmer (BV) equation, usually used to describe reaction rates in electrodes, is inaccurate, especially at higher voltage levels. Instead, a different approach, called Marcus-Hush-Chidsey charge-transfer theory, provides more realistic results — revealing that the limiting step of these reactions is not what had been thought.

The new findings could help engineers design better electrodes to improve batteries’ rates of charging and discharging, and provide a better understanding of other electrochemical processes, such as how to control corrosion. The work is described this week in the journal Nature Communications by MIT postdoc Peng Bai and professor of chemical engineering and mathematics Martin Bazant.

Previous work was based on the assumption that the performance of electrodes made of lithium iron phosphate — widely used in lithium-ion batteries — was limited primarily by how fast lithium ions would diffuse into the solid electrode from the liquid electrolyte. But the new analysis shows that the critical interface is actually between two solid materials: the electrode itself, and a carbon coating used to improve its performance.

Bai and Bazant’s analysis shows that both transport steps in solid and liquid — ion migration in the electrolyte, and diffusion of "quasiparticles" called polarons — are very fast, and therefore do not limit battery performance. “We show it’s actually electrons, not the ions, transferring at the solid-solid interface,” Bai says, that determine the rate.

Bazant says researchers had not suspected, despite extensive research on lithium iron phosphate, that the material’s electrochemical reactions might be limited by electron transfer between two solids. “That’s a completely new picture for this material; it’s not something that has even been mentioned before,” he says.

While coating the electrode surface with a thin layer of carbon or graphene had been shown to improve performance, there was no microscopic and quantitative understanding of why this made a difference, Bazant says. The new findings will help explain a number of apparently conflicting results in the scientific literature, he says.

For example, the classical equations used to predict the performance of such materials have indicated that the logarithm of the reaction rate should vary linearly as voltage is increased — but experiments have shown a nonlinear response, with the uptake of lithium flattening out at high voltage. The discrepancies have been significant, Bazant says: “We find the reaction rate is much lower than what is predicted.”

The new analysis means that to make further improvements in this technology, the focus should be on “how you engineer the surface” at the solid-solid interface, Bai says.

Bazant adds that the new understanding could have implications far beyond electrode design, since the fundamental processes the team uncovered apply to electrochemical processes including electrodeposition, corrosion, and fuel cells. “It’s also important for basic science,” he says, since the process is both ubiquitous and poorly understood.

The BV equation is purely empirical, and “doesn’t tell you anything about what’s going on microscopically,” Bazant says. By contrast, the Marcus-Hush-Chidsey equations — for which Rudolph Marcus of the California Institute of Technology was awarded the 1992 Nobel Prize in chemistry — are based on a precise understanding of atomic-level activity. So the new analysis, Bazant maintains, could lead not only to new practical solutions, but also to a deeper understanding of the underlying mechanisms.

Christopher Chidsey, an associate professor of chemistry at Stanford University who was not involved in this work, says the research “seems to be both theoretically well-grounded and experimentally creative.” He says determining these reaction rates “is both quite fundamental and of immediate practical interest in high-power applications like traction batteries for cars, trucks, and buses.”

Umair Irfan and ClimateWire report on new research that helps explain how lithium batteries operate. The findings could lead to new methods for optimizing battery performance.

Revealing how a battery material works