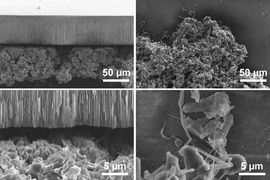 ↓ Download Image
Caption: At right, scanning electron microscope (SEM) images show the two types of lithium deposits, the bulky, mossy type (at top), which grows from its base, and the needle-like dendritic type (bottom), which grows from the tips. At left, SEM images show the effect of a blocking layer of ceramic material that limits the growth of the mossy deposits.

Caption:
At right, scanning electron microscope (SEM) images show the two types of lithium deposits, the bulky, mossy type (at top), which grows from its base, and the needle-like dendritic type (bottom), which grows from the tips. At left, SEM images show the effect of a blocking layer of ceramic material that limits the growth of the mossy deposits.
Credits:
Courtesy of Peng Bai

Battery researchers have been focusing on lithium metal electrodes as leading contenders for improving the amount of energy that batteries can store without increasing their weight. But lithium in this metallic form has a problem that has stymied much of this research effort: As the batteries are being charged, finger-like lithium deposits form on the metal surface, which can hamper performance and even lead to short-circuits that damage or disable the battery.

Now, a team of researchers at MIT says it has carried out the most detailed analysis yet of exactly how these deposits form, and reports that there are two entirely different mechanisms at work. While both forms of deposits are composed of lithium filaments, the way they grow depends on the applied current. Clustered, “mossy” deposits, which form at low rates, turn out to grow from their roots and can be relatively easy to control. The much more sparse and rapidly advancing “dendritic” projections grow only at their tips. The dendritic type, the researchers say, are harder to deal with and are responsible for most of the problems.

This research provides “fundamental experimental and theoretical insights into the growth of lithium metal, showing that there are really two different kinds of growth,” Bazant says. Although it was known that such growth occurs on lithium surfaces, this is the first study to show the two different types — mossy, which grows slowly from the base, and dendritic, which extends rapidly from the growing tips.

While previous research has always lumped the two types of growth together under the blanket term “dendrites,” he says, the new work demonstrates the precise conditions for each distinct growth mode to occur, and how the mossy type can be relatively easily controlled.

The root-growing mossy growth, the team found, can be blocked by adding a separator layer made of a nanoporous ceramic material (a sponge-like material with tiny pores at the nanometer scale, or billionths of a meter across). The tip-growing dendritic growth, by contrast, cannot be easily blocked, but fortunately should not occur in practical batteries. The normal working currents of these batteries are much lower than the characteristic current associated with the tip-growing deposits, so these deposits will not form unless significant degradation of the electrolyte has occurred.

The “mossy" type of root-based growth is followed by the faster, tip-based needle-like dendritic growth. (Courtesy of Peng Bai)

In principle, replacing conventional carbon-based anodes with lithium metal could cut in half the weight and volume of lithium-ion batteries, for a given amount of storage capacity and output current, Bai explains. But the poorly understood occurrence of these surface deposits during recharging has been a major obstacle to the development of such batteries.

Unless they are somehow controlled, Bai says, “those small fibers can go right through the separator [layer inside the battery] and cause explosions or fires.”

Even short of such destruction, the filaments gradually reduce the storage capacity of the battery and cause it to degrade over time. Now, this research shows that these growths can be effectively controlled at lower current levels, for a given cell capacity, and demonstrates what the upper limits on battery performance would need to be in order to prevent the truly damaging dendritic filaments.

The separators that could block the mossy growth are made of anodic aluminum oxide, or AAO, which is 60 micrometers thick and has well-aligned, straight nanopores across its thickness. “It’s a big discovery, because it answers the question of why you sometimes have better cycling [charging and discharging] performance when you use ceramic separators,” Bai says. The research suggests that flexible composite ceramic separators, such as those made by coating ceramic particles onto conventional polyolefin separators, should be used in lithium metal batteries to help block the root-growing mossy lithium.

Bazant explains that most previous research on the use of lithium metal anodes has been carried out at low current levels or low battery capacities, and because of that the second type of growth mechanism had not been reliably observed. The MIT team carried out tests at higher current levels that clearly revealed the two distinct types of growth.

He says that the findings were made possible by his team’s development of an innovative laboratory setup, a glass capillary cell, that “allows you to see the growth, and you can see where there is this transition from one kind of growth to the other.” Previous research had mostly relied on electrical measurements to infer what was taking place physically inside the battery, but seeing it in action made the differences very clear. The slow, mossy growth proceeds for a while, and then at a certain level of current, “all of a sudden, this little finger [of lithium] snaps out. It allows you to see exactly when the dendrites begin.”

The new findings will now provide battery researchers with a better understanding of the underlying scientific principles, and show “what are the limitations on rates and capacity that are achievable,” Bazant says.

The work was supported by Robert Bosch LLC through the MIT Energy Initiative.