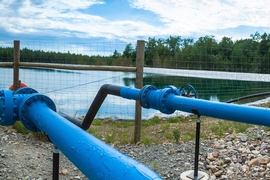 ↓ Download Image
Caption: Researchers say the new desalination method could be useful for cleaning the contaminated water generated by hydraulic fracturing, or fracking. Shown here is a holding pit for fracking water. 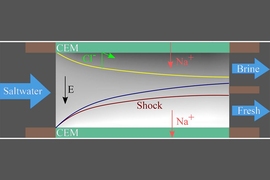 ↓ Download Image
Caption: Diagram of the new process shows how a shockwave (red line) is generated in salty water flowing through a porous medium, with a voltage applied to membranes (green) at each side of the vessel. The shockwave pushed the salt ions off to one side of the flow, leaving fresh water at the other side, where it can be separated out.

Caption:
Researchers say the new desalination method could be useful for cleaning the contaminated water generated by hydraulic fracturing, or fracking. Shown here is a holding pit for fracking water.

Caption:
Diagram of the new process shows how a shockwave (red line) is generated in salty water flowing through a porous medium, with a voltage applied to membranes (green) at each side of the vessel. The shockwave pushed the salt ions off to one side of the flow, leaving fresh water at the other side, where it can be separated out.

As the availability of clean, potable water becomes an increasingly urgent issue in many parts of the world, researchers are searching for new ways to treat salty, brackish or contaminated water to make it usable. Now a team at MIT has come up with an innovative approach that, unlike most traditional desalination systems, does not separate ions or water molecules with filters, which can become clogged, or boiling, which consumes great amounts of energy.

Instead, the system uses an electrically driven shockwave within a stream of flowing water, which pushes salty water to one side of the flow and fresh water to the other, allowing easy separation of the two streams. The new approach is described in the journal Environmental Science and Technology Letters, in a paper by professor of chemical engineering and mathematics Martin Bazant, graduate student Sven Schlumpberger, undergraduate Nancy Lu, and former postdoc Matthew Suss.

This approach is “a fundamentally new and different separation system,” Bazant says. And unlike most other approaches to desalination or water purification, he adds, this one performs a “membraneless separation” of ions and particles.

Membranes in traditional desalination systems, such as those that use reverse osmosis or electrodialysis, are “selective barriers,” Bazant explains: They allow molecules of water to pass through, but block the larger sodium and chlorine atoms of salt. Compared to conventional electrodialysis, “This process looks similar, but it’s fundamentally different,” he says.

In the new process, called shock electrodialysis, water flows through a porous material —in this case, made of tiny glass particles, called a frit — with membranes or electrodes sandwiching the porous material on each side. When an electric current flows through the system, the salty water divides into regions where the salt concentration is either depleted or enriched. When that current is increased to a certain point, it generates a shockwave between these two zones, sharply dividing the streams and allowing the fresh and salty regions to be separated by a simple physical barrier at the center of the flow.

Even though the system can use membranes on each side of the porous material, Bazant explains, the water flows across those membranes, not through them. That means they are not as vulnerable to fouling — a buildup of filtered material — or to degradation due to water pressure, as happens with conventional membrane-based desalination, including conventional electrodialysis. “The salt doesn’t have to push through something,” Bazant says. The charged salt particles, or ions, “just move to one side,” he says.

The underlying phenomenon of generating a shockwave of salt concentration was discovered a few years ago by the group of Juan Santiago at Stanford University. But that finding, which involved experiments with a tiny microfluidic device and no flowing water, was not used to remove salt from the water, says Bazant, who is currently on sabbatical at Stanford.

The new system, by contrast, is a continuous process, using water flowing through cheap porous media, that should be relatively easy to scale up for desalination or water purification. “The breakthrough here is the engineering [of a practical system],” Bazant says.

One possible application would be in cleaning the vast amounts of wastewater generated by hydraulic fracturing, or fracking. This contaminated water tends to be salty, sometimes with trace amounts of toxic ions, so finding a practical and inexpensive way of cleaning it would be highly desirable. This system not only removes salt, but also a wide variety of other contaminants — and because of the electrical current passing through, it may also sterilize the stream. “The electric fields are pretty high, so we may be able to kill the bacteria,” Schlumpberger says.

The research produced both a laboratory demonstration of the process in action and a theoretical analysis that explains why the process works, Bazant says. The next step is to design a scaled-up system that could go through practical testing.

Initially at least, this process would not be competitive with methods such as reverse osmosis for large-scale seawater desalination. But it could find other uses in the cleanup of contaminated water, Schlumpberger says.

Unlike some other approaches to desalination, he adds, this one requires little infrastructure, so it might be useful for portable systems for use in remote locations, or for emergencies where water supplies are disrupted by storms or earthquakes.

Maarten Biesheuvel, a principal scientist at the Netherlands Water Technology Institute who was not involved in this research, says the work “is of very high significance to the field of water desalination. It opens up a whole range of new possibilities for water desalination, both for seawater and brackish water resources, such as groundwater.”

Biesheuvel adds that this team “shows a radically new design where within one and the same channel ions are separated between different regions. … I expect that this discovery will become a big ‘hit’ in the academic field. … It will be interesting to see whether the upscaling of this technology, from a single cell to a stack of thousands of cells, can be achieved without undue problems.”

The research was supported by the MIT Energy Initiative, Weatherford International, the USA-Israel Binational Science Foundation, and the SUTD-MIT Graduate Fellows Program.

MIT researchers have devised a technique for desalinating water, reports Nina Godlewski for Boston.com. “The process, called shock electrodialysis, filters water through a material made of small glass particles,” writes Godlewski. “When an electric current is introduced to the system, the water divides into areas of high or low salt concentration.”