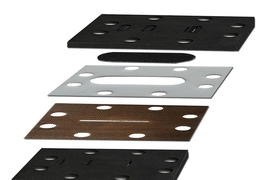 The palm-sized prototype generates three times as much power per square centimeter as other membraneless systems — a power density that is an order of magnitude higher than that of many lithium-ion batteries and other commercial and experimental energy-storage systems.

The device stores and releases energy in a device that relies on a phenomenon called laminar flow: Two liquids are pumped through a channel, undergoing electrochemical reactions between two electrodes to store or release energy. Under the right conditions, the solutions stream through in parallel, with very little mixing. The flow naturally separates the liquids, without requiring a costly membrane.

The reactants in the battery consist of a liquid bromine solution and hydrogen fuel. The group chose to work with bromine because the chemical is relatively inexpensive and available in large quantities, with more than 243,000 tons produced each year in the United States.

In addition to bromine’s low cost and abundance, the chemical reaction between hydrogen and bromine holds great potential for energy storage. But fuel-cell designs based on hydrogen and bromine have largely had mixed results: Hydrobromic acid tends to eat away at a battery’s membrane, effectively slowing the energy-storing reaction and reducing the battery’s lifetime.

To circumvent these issues, the team landed on a simple solution: Take out the membrane.

“This technology has as much promise as anything else being explored for storage, if not more,” says Cullen Buie, an assistant professor of mechanical engineering at MIT. “Contrary to previous opinions that membraneless systems are purely academic, this system could potentially have a large practical impact.”

Buie, along with Martin Bazant, a professor of chemical engineering, and William Braff, a graduate student in mechanical engineering, have published their results this week in Nature Communications.

“Here, we have a system where performance is just as good as previous systems, and now we don’t have to worry about issues of the membrane,” Bazant says. “This is something that can be a quantum leap in energy-storage technology.”

Low-cost energy storage has the potential to foster widespread use of renewable energy, such as solar and wind power. To date, such energy sources have been unreliable: Winds can be capricious, and cloudless days are never guaranteed. With cheap energy-storage technologies, renewable energy might be stored and then distributed via the electric grid at times of peak power demand.

“Energy storage is the key enabling technology for renewables,” Buie says. “Until you can make [energy storage] reliable and affordable, it doesn’t matter how cheap and efficient you can make wind and solar, because our grid can’t handle the intermittency of those renewable technologies.”

By designing a flow battery without a membrane, Buie says the group was able to remove two large barriers to energy storage: cost and performance. Membranes are often the most costly component of a battery, and the most unreliable, as they can corrode with repeated exposure to certain reactants.

Braff built a prototype of a flow battery with a small channel between two electrodes. Through the channel, the group pumped liquid bromine over a graphite cathode and hydrobromic acid under a porous anode. At the same time, the researchers flowed hydrogen gas across the anode. The resulting reactions between hydrogen and bromine produced energy in the form of free electrons that can be discharged or released.

The researchers were also able to reverse the chemical reaction within the channel to capture electrons and store energy — a first for any membraneless design.

In experiments, Braff and his colleagues operated the flow battery at room temperature over a range of flow rates and reactant concentrations. They found that the battery produced a maximum power density of 0.795 watts of stored energy per square centimeter.

In addition to conducting experiments, the researchers drew up a mathematical model to describe the chemical reactions in a hydrogen-bromine system. Their predictions from the model agreed with their experimental results — an outcome that Bazant sees as promising for the design of future iterations.

“We have a design tool now that gives us confidence that as we try to scale up this system, we can make rational decisions about what the optimal system dimensions should be,” Bazant says. “We believe we can break records of power density with more engineering guided by the model.”

Yury Gogotsi, a professor of materials science and engineering at Drexel University, says eliminating the membrane is the next step toward scalable, inexpensive energy storage. The group’s design, he says, will help engineers better understand the physics of membraneless systems.

“You cannot have an inexpensive energy-storage system by piling up tens of thousands of individual small cells, like cellphone or computer batteries,” says Gogotsi, who did not contribute to the research. “As any new technology, the laminar flow battery will need time to prove its viability. It’s like a newborn baby — we’ll only know what the technology is good for after a few years.”

According to preliminary projections, Braff and his colleagues estimate that the membraneless flow battery may produce energy costing as little as $100 per kilowatt-hour — a goal that the U.S. Department of Energy has estimated would be economically attractive to utility companies.

“You can do so much to make the grid more efficient if you can get to a cost point like that,” Braff says. “Most systems are easily an order of magnitude higher, and no one’s ever built anything at that price.”