Historian of the hinterlands 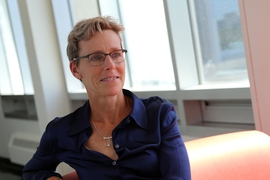 History can help us face hard truths. The places Kate Brown studies are particularly full of them.

Brown, a historian in MIT’s Program in Science, Technology, and Society, has made a career out of studying what she calls “modernist wastelands” — areas suffering after years of warfare, social conflict, and even radioactive fallout from atomic accidents.

Brown has spent years conducting research in the former Soviet Union, often returning to a large region stretching across the Poland-Ukraine border, which has been beset by two world wars, ethnic cleansing, purges, famine, and changes in power. It’s the setting for her acclaimed first book, “A Biography of No Place” (2004), a chronicle of the region’s conflicts and their consequences.

The same region includes the site of the Chernobyl nuclear-reactor explosion, subject of Brown’s fourth and most recent book, “Manual for Survival: A Chernobyl Guide to the Future” (2019), which uncovers extensive new evidence about the effects of the disaster on the area and its people.

“Progress [often] occurs in big capitals, but if you go to the hinterlands, you see what’s left in the wake of progress, and it’s usually a lot of destruction,” says Brown, speaking of areas that have suffered due to technological or economic changes.

That does not apply only to the former Soviet Union and its former satellite states, to be sure. Brown, who considers herself an transnational historian, is also the author of 2013’s “Plutopia,” reconstructing life in and around the plutonium-producing plants in Richland, Washington, and Ozersk, Russia, which have both left a legacy of nuclear contamination.

With a record of innovative and award-winning research over more than two decades in academia, Brown joined MIT with tenure, as a professor of science, technology, and society, in early 2019.

The lesson that life can be tough in less-glamorous locales is one Brown says she learned early on. Brown grew up in Elgin, Illinois, once headquarters of the famous Elgin National Watch Company — although that changed.

“The year I was born, 1965, the Elgin watch factory was shuttered, and they blew up the watch tower,” Brown says. “It was a company town, and that was the main business. I grew up watching the supporting businesses close, and then regular clothing stores and grocery stores went bankrupt.”

And while the changes in Elgin were very different (and less severe) than those in the places she has studied professionally, Brown believes her hometown milieu has shaped her work.

“It was nothing near what I describe in wartime Ukraine, or Chernobyl, or one of plutonium plants, but I finally realized I was so interested in modernist wastelands because of my own background,” Brown says.

Indeed, Brown notes, her mother moved four times in her life because of the “deindustrialized landscape,” from places like Aliquippa, Pennsylvania, and Detroit. And her parents, she says, “moved to Elgin thinking it was healthy, small-town America. So how many times do they have to jump? … What if you care about your family and community? What if you’re loyal?”

As it happens, part of the direct impetus for Brown’s career came from her mother. One day in the 1980s, Brown recalls, she was talking to her parents and criticizing the superficial culture surrounding U.S.-Soviet relations. To which Brown’s mother responded, “Do something about it. Study Russian, change the world.”

As an undergraduate at the University of Wisconsin, Brown soon “took everything Russian, Russian lit and translation, grammar, history, politics, and I just got hooked. Then I thought I should go study there.” In 1987, she spent a year abroad in Leningrad (now St. Petersburg). After graduating, Brown worked for a study-abroad program in the Soviet Union for three more years, helping students troubleshoot “pretty major problems, with housing and food and medical care,” as well as some cases where students had run afoul of Soviet authorities.

Returning to the U.S., Brown entered the graduate program in history at the University of Washington while working as a journalist. She kept returning to the Ukraine borderlands region, collecting archival and observational material, and writing it up, for her dissertation “in the narrative mode of a first-person travelogue.”

That did not fit the model of a typical PhD thesis. But Richard White, a prominent American historian with an openness toward innovative work, who was then at the University of Washington, advocated to keep the form of Brown’s work largely intact. She received her PhD, and more: Her thesis formed the basis of “A Biography of No Place,” which won the George Louis Beer Prize for International European History from the American Historical Association (AHA). Brown joined the faculty at the University of Maryland at Baltimore County before joining MIT.

A treasure island for research

In all of Brown’s books, a significant portion of the work, a bit atypically for academia, has continued to incorporate first-person material about her travels, experiences, and research, something she also regards as crucial.

“Because these places are rarely visited, they’re hard to imagine for the readers,” Brown says. “That puts me in the narrative, though not for all of it.”

Brown’s approach to history is also highly archival: She has unearthed key documents in all manner of local, regional, and national repositories. When she entered the profession, in the 1990s, many Soviet archives were just opening up, providing some rich opportunities for original research.

“It’s amazing,” Brown says. “Over and over again I’ve been one of the first persons to walk into an archive and see what’s there. And that is just sort of a treasure island quality of historical research. Being a Soviet historian in the early 1990s, there was nothing else like it.”

The archives continue to be profitable for Brown, yielding some of her key new insights in “Manual for Survival.” In assessing Chernobyl, Brown shows, local and regional studies of the disaster’s effects were often extensive and candid, but the official record became sanitized as it moved up the Soviet bureaucratic hierarchy.

Brown is currently working on a new research project, examining overlooked forms of human knowledge about plants and the natural environment. She notes that there are many types of “indigenous knowledge and practices we have missed or rejected,” which could foster a more sustainable relationship between human society and the environment.

It is a different type of topic than Brown’s previous work, although, like her other projects, this one recognizes that we have spent too long mishandling the environment, rather than prioritizing its care — another hard truth to consider.

Prof. Kate Brown speaks with Rachel Toor of The Chronicle of Higher Education about writing, delving into why she writes in the first person and her interest in “genre-busting” history. “Thinking about writing in the first person has inspired me to get up from my desk and out of the archive to explore the landscapes and communities that are the settings of my histories,” Brown explains.

Chernobyl: How bad was it?

In cancer research, a winding road to discovery