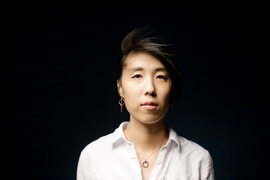 Caption:
PhD student Clare Kim studies the history of mathematics and the ways that mathematicians interacted with artists, humanists, and philosophers throughout the 20th century.
Credits:
Image: Jared Charney

When Clare Kim began her fall 2017 semester as the teaching assistant for 21H.S01, the inaugural “MIT and Slavery” course, she didn’t know she and her students would be creating a historical moment of their own at the Institute.

Along with Craig Steven Wilder, the Barton L. Weller Professor of History, and Nora Murphy, an archivist for researcher services in the MIT Libraries, Kim helped a team of students use archival materials to examine the Institute’s ties to slavery and how that legacy has impacted the modern structure of scientific institutions. The findings that came to light through the class thrust Kim and her students onto a prominent stage. They spoke about their research in media interviews and at a standing-room-only community forum, and helped bring MIT into a national conversation about universities and the institution of slavery in the United States.

For Kim, a PhD student in MIT’s Program in History, Anthropology, and Science, Technology, and Society (HASTS), it was especially rewarding to help the students to think critically about their own scientific work through a historical context. She enjoyed seeing how the course challenged conventional ideas that had been presented to them about their various fields of study.

“I think people tend to think too much about history as a series of true facts where the narrative that gets constructed is stabilized. Conducting historical research is fun because you have a chance to re-examine evidence, examine archival materials, reinterpret some of what has already been written, and craft a new narrative as a result,” Kim says.

This year, Kim was awarded the prestigious Goodwin Medal for her work as a TA for several MIT courses. The award recognizes graduate teaching assistants that have gone the extra mile in the classroom. Faculty, colleagues, and former students praised Kim for her compassionate, supportive, and individual approach to teaching.

“I love teaching,” she says. “I like to have conversations with my students about what I’m thinking about. It’s not that I’m just imparting knowledge, but I want them to develop a critical way of thinking. I want them to be able to challenge whatever analyses I introduce to them.”

Kim also applies this critical-thinking lens to her own scholarship in the history of mathematics. She is particularly interested in studying math this way because the field is often perceived as “all-stable” and contained, when in fact its boundaries have been much more fluid.

Kim’s own work re-examines the history of mathematical thought and how it has impacted nonscientific and technical fields in U.S. intellectual life. Her dissertation focuses on the history of mathematics and the ways that mathematicians interacted with artists, humanists, and philosophers throughout the 20th century. She looks at the dialogue and negotiations between different scholars, exploring how they reconfigured the boundaries between academic disciplines.

Kim says that this moment in history is particularly interesting because it reframes mathematics as a field that hasn’t operated autonomously, but rather has engaged with humanistic and artistic practices. This creative perspective, she says, suggests an ongoing, historical relationship between mathematics and the arts and humanities that may come as a surprise to those more likely to associate mathematics with technical and military applications, at least in terms of practical uses.

With an engineering professor father and a mathematician mother, Kim has long been interested in science and mathematics. However, she says influences from her family, which includes a twin sister who is a classicist and an older sister who studied structural biology, ensured that she would also develop a strong background in the humanities and literature.

Kim entered college thinking that she would pursue a technical field, though likely not math itself — she jokes that her math career peaked during her time competing in MATHCOUNTS as a kid. But during her undergraduate years at Brown University, she took a course on the history of science taught by Joan Richards, a professor specializing in the history of mathematics. There, she discovered her interest in studying not just scientific knowledge, but the people who pursue it.

After earning a bachelor’s in history at Brown, with a focus in mathematics and science, Kim decided to pursue a doctoral degree. MIT’s HASTS program appealed to her because of its interdisciplinary approach to studying the social and political components of science and technology.

“In addition to receiving more formal training in the history of science itself, HASTS trained me in anthropological inquiry, political theory, and all these different kinds of methods that could be brought to bear on the social sciences and humanities more generally,” Kim says.

After defending her thesis, Kim will begin a postdoc at Washington University in St. Louis, where she will continue her research and begin converting her dissertation into a book manuscript. She will also be teaching a course she has developed called “Code and Craft,” a course that explores, in a variety of historical contexts, the artful and artisanal components of AI, computing, and otherwise “technical” domains.

In her free time, Kim practices taekwondo (she has a first-degree black belt) and enjoys taking long walks through Cambridge, which she says is how she gets some of her best thinking done.