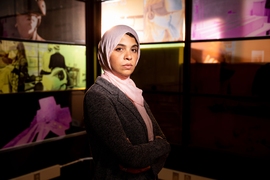 While doing field research for her graduate thesis in her hometown of Cairo, Norhan Magdy Bayomi observed firsthand the impact of climate change on her local community.

The residents of the low-income neighborhood she was studying were living in small, poorly insulated apartments that were ill-equipped for dealing with the region’s rising temperatures. Sharing cramped quarters — with families in studios less than 500 square feet — and generally lacking air conditioning or even fans, many people avoided staying in their homes altogether on the hottest days.

It was a powerful illustration of one of the most terrible aspects of climate change: Those who are facing its most extreme impacts also tend to have the fewest resources for adapting.

This understanding has guided Bayomi’s research as a PhD student in the Department of Architecture’s Building Technology Program. Currently in her third year of the program, she has mainly looked at countries in the developing world, studying how low-income communities there adapt to changing heat patterns and documenting global heatwaves and populations’ adaptive capacity to heat. A key focus of her research is how building construction and neighborhoods’ design affect residents’ vulnerability to hotter temperatures.

She uses drones with infrared cameras to document the surface temperatures of urban buildings, including structures with a variety of designs and building materials, and outdoor conditions in the urban canyons between buildings.

“When you look at technologies like drones, they are not really designed or commonly used to tackle problems like this. We’re trying to incorporate this kind of technology to understand what kind of adaptation strategies are suitable for addressing climate change, especially for underserved populations,” she says.

Eyes in the sky

Bayomi is currently developing a computational tool to model heat risk in urban areas that incorporates building performance, available urban resources for adaptation, and population adaptive capacity into its data.

“Most of the tools that are available right now are mostly using statistical data about the population, the income, and the temperature. I’m trying to incorporate how the building affects indoor conditions, what resources are available to urban residents, and how they adapt to heat exposure — for instance, if they have a cooling space they could go to, or if there is a problem with the power supplies and they don’t have access to ceiling fans,” she says. “I’m trying to add these details to the equation to see how they would affect risk in the future.”

She recently began looking at similar changes in communities in the Bronx, New York, in order to see how building construction, population adaptation, and the effects of climate change differ based on region. Bayomi says that her advisor, Professor John Fernández, motivated her to think about how she could apply different technologies into her field of research.

Bayomi’s interest in drones and urban development isn’t limited to thermal mapping. As a participant in the School of Architecture and Planning’s DesignX entrepreneurship program, she and her team founded Airworks, a company that uses aerial data collected by the drones to provide developers with automated site plans and building models. Bayomi worked on thermal imaging for the company, and she hopes to continue this work after she finishes her studies.

Bayomi is also working with Fernández’s Urban Metabolism Group on an aerial thermography project in collaboration with Tarek Rakha PhD ’15, an assistant professor at Georgia Tech. The project is developing a cyber-physical platform to calibrate building energy models, using drones equipped with infrared sensors that autonomously detect heat transfer anomalies and envelope material conditions. Bayomi’s group is currently working on a drone that will be able to capture these data and process them in real-time.

Bayomi says the personal connections that she has developed at MIT, both within her program and across the Institute, have profoundly shaped her graduate experience.

“MIT is a place where I felt home and welcome. Even as an Arabic muslim woman, I always felt home,” she says. “My relationship with my advisor was one of the main unique things that kept me centered and focused, as I was blessed with an advisor who understands and respects my ideas and gives me freedom to explore new areas.”

She also appreciates the Building Technology program’s “unique family vibe,” with its multiple academic and nonacademic events including lunch seminars and social events.

When she’s not working on climate technologies, Bayomi enjoys playing and producing music. She has played the guitar for 20 years now and was part of a band during her undergraduate years. Music serves an important role in Bayomi’s life and is a crucial creative outlet for her. She currently produces rock-influenced trance music, a genre categorized by melodic, electronic sounds. She released her first single under the moniker Nourey last year and is working on an upcoming track. She likes incorporating guitar into her songs, an element not typically heard in trance tunes.

“'I’m trying to do  something using guitars with ambient influences in trance music, which is not very common,” she says.

Bayomi has been a member of the MIT Egyptian Students Association since she arrived at MIT in 2015, and now serves as vice president. The club works to connect Egyptian students at MIT and students in Egypt, to encourage prospective students to apply and provide guidance based on the members’ own experiences.

“We currently have an amazing mix of students in engineering, Sloan [School of Management], Media Lab, and architecture, including graduate and undergraduate members. Also, with this club we try to create a little piece of home here at MIT for those who feel homesick and disconnected due to culture challenges,” she says.

“I am keen to participate whenever possible in these kind of activities, which enhance my academic experience here,” she says. “MIT is a rich place for such events.”