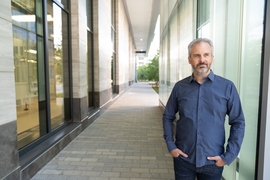 ↓ Download Image
Caption: “I really think about myself first as a historian of modernity,” says Associate Professor Timothy Hyde. “Architectural history is the particular vehicle that I use to explore the history of modernity.”
Credits: Image: Bryce Vickmark

Caption:
“I really think about myself first as a historian of modernity,” says Associate Professor Timothy Hyde. “Architectural history is the particular vehicle that I use to explore the history of modernity.”
Credits:
Image: Bryce Vickmark

A building is many things: a stylistic statement, a form shaped to its function, and a reflection of its era.

To MIT architectural historian Timothy Hyde, a building represents something else as well.

Even when architecture is stylish and trend-setting, then, buildings are developed within political, legal, and technological limits. And Hyde, formerly a practicing architect himself, has built a niche for himself at MIT as a scholar exploring those issues.

In both, Hyde, whose sharp archival work matches his grasp of buildings, shows how buildings have co-evolved along with the political and legal practices of the contemporary world.

“I really think about myself first as a historian of modernity,” Hyde explains. “Architectural history is the particular vehicle that I use to explore the history of modernity.”

Hyde grew up in New York City’s Greenwich Village and double-majored in English and architecture at Yale University. He then received a master of architecture degree from Princeton University and became a practicing architect, mostly working on residences. But he kept writing about architecture, a fairly common practice in the field.

“In architecture, as a profession, writing has always been a companion to the building,” Hyde says. “Many architects write.” But before long, he says, “I just had a recognition that the ideas I wanted to explore were best expressed through writing, as opposed to through building.”

At about the same time, Hyde was teaching a course at Northeastern University and soon realized he wanted to fully commit to the academic life.

“Instead of trying to write alongside my practice, I realized at that point I wanted to flip the two around and focus on writing as a historian, and to be able to teach and work in academia but still remain engaged in a contemporary conversation about architecture,” Hyde says.

Hyde thus returned to school, earning his PhD at Harvard University. He sought out an academic position, and at MIT, has landed in the Program in History, Theory, and Criticism, a highly active group of architectural and art historians within the School of Architecture and Planning.

“We’re a humanities discipline, but we’re affiliated very tightly to a professional practice that is itself a composite of art and engineering,” Hyde says. “So the role of the historian within the architecture program is a very broad one. We can talk about many facets of buildings.”

Cuba, Britain, and … the South Pole?

One hallmark of architectural history at MIT is geographic scope: Professors at the Institute have often made a point of examining the subject in global terms. Hyde takes that approach as well.

Hyde’s 2012 book on Cuba — “Constitutional Modernism: Architecture and Civil Society in Cuba, 1933-1959” — stemmed from his realization that Cuba at the time “was an incredibly exciting and fertile place for cultural exchanges and avant-garde aesthetics, and had an economic boom that allowed the commissioning of very innovative projects.”

When Cuba drafted a new constitution in the 1940s, philosophers, artists, and writers were a part of the process. Architectural thinking, Hyde contends, was an integral part of the planning and vision of the country — although that became discarded after Cuba’s communist revolution of the late 1950s.

His book on Britain — “Ugliness and Judgment,” published in 2019 — explores several distinct episodes in which aesthetic disagreements over architecture in London helped produce modern social and legal practices. For instance, Britain’s libel law took shape in response to failed lawsuits filed by Sir John Soane, whose early 19th-century buildings were the object of stinging put-downs from critics.

Moreover, in Britain, environmental science and policy have important roots in a controversy of the Houses of Parliament, rebuilt in stone in the 1840s. When the parliament building quickly became smothered in soot, it instigated a decades-long process in which the country gradually charted out new antipollution laws.

Hyde is currently working on a third book project, which looks at the historical legacy of buildings that have vanished, from Thoreau’s cabin at Walden Pond to shelters in Antarctica. Their presence as architectural objects was crucial to the people who inhabited them; Hyde is exploring how this shapes our understanding of the history surrounding them.

“Thoreau’s cabin at Walden has an enormous textual presence, but it has virtually no physical presence,” Hyde says. “If the architecture is so central to Thoreau’s book, yet no longer has a presence as a material object, how should architectural history approach that?”

Working well with others

Beyond his own work, Hyde has helped establish a new, cooperative group of scholars in his field, the Aggregate Architectural History Collaborative.

The group holds workshops and produces published volumes and pamphlets in architectural history, to aid scholars who often work in isolation. Their edited volume, “Governing by Design: Architecture, Economy, and Politics in the Twentieth Century,” was published by the University of Pittsburgh Press.

The idea, Hyde says, is “to try to allow for a collaborative conversation that is otherwise not cultivated very strongly within the field.” The group’s in-depth workshops provide scholars with substantive feedback about works in progress.

“Having a workshop where you can spend two days talking about each other’s work is an enormous luxury, and something that I have not experienced elsewhere in our field,” Hyde says.

Scholars participating in the collaborative can thus can enjoy a win-win situation, pursuing their own work while getting help from others. Perhaps every building is a compromise — but architectural history don’t have to be one.

The politics of ugly buildings