The politics of ugly buildings 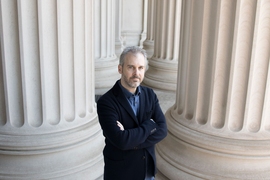 In 1984, when the British government was planning to build a flashy modernist addition to the National Gallery in London, Prince Charles offered a dissenting view. The proposed extension, he said, resembled “a monstrous carbuncle on the face of a much-loved and elegant friend.” A public controversy ensued, and eventually a more subtle addition was built.

There is more to the story, however. Prince Charles’ public interventions into architecture fell into a legal gray area. Was he improperly trying use the influence of the British monarchy — now meant to be nonpolitical — to affect government policy?

“It’s not quite clear whether Prince Charles was speaking as a private citizen or as a future monarch,” says Timothy Hyde, the Clarence H. Blackall Career Development Associate Professor in MIT’s Department of Architecture. He adds: “Because of his architectural pronouncements, a series of constitutional debates has emerged about how such opinions should be regulated, or if they should be regulated at all.”

Indeed, Prince Charles’ public tussles over architecture have led to legal battles. In 2015, Britain’s Supreme Court ruled that 27 advocacy memos Prince Charles had written to various officials — on architecture, the environment, and other subjects — could not be kept private, meaning the public could scrutinize his activities. And more recently, Prince Charles has vowed not to make similar policy interventions should he become king.

So for Prince Charles, debates over architecture have spilled into questions of political power. But as Hyde explores in a new book, “Ugliness and Judgment: On Architecture in the Public Eye,” published by Princeton University Press, this is hardly unique. In Britain alone, Hyde notes, controversies specifically over the “ugliness” of buildings have shaped matters from libel law to environmental policy.

“Aesthetic arguments about ugliness have often served to tie architectural thinking to other kinds of debates and questions in parallel spheres of social and cultural production — things like science, law, professionalism,” Hyde says. “Debates about ugliness are very easily legible as debates about politics.”

The impetus for the book, says Hyde, an architectural historian, came partly from the sheer number of people who have commented about “ugly” buildings to him.

“It’s the frequency of that phrase, ‘What an ugly building,’ that really piqued my curiosity about ugliness,” Hyde says.

“Ugliness is an undertheorized dimension of architecture, given how common that critique is,” he adds. “People always think buildings are ugly. Particularly as a historian of modern architecture, I encounter any number of people who say ‘Oh, you’re a modern architectural historian, can you explain, why would an architect ever think to do a building like that?’”

Hyde’s book, however, is not simply about aesthetics. Instead, as he soon noticed, disputes centered around “ugly” buildings have a way of leaping into other domains of life. Consider libel laws. In the first decades of the 19th century, the prominent architect Sir John Soane filed a long series of libel cases against critics, which led to the larger evolution of the law.

“There was a prevailing assumption at the time that a work of architecture, a work of art, a work of literature, was an embodiment of its creator,” Hyde says. A critique of a building, then, could be seen a personal attack on an individual. But as Soane filed one libel cases after another — against people who used terms like “a ridiculous piece of architecture” and “a palpable eyesore” — he lost again and again. A bad review, the legal community decided, was simply that.

“In the cases that John Soane brought for libel, all of which he lost … the modern conception that we have within libel law, of art criticism being a special case, emerged,” Hyde says. “Now what we take for granted, this modern idea that one can criticize a work of architecture or book, without necessarily saying its creator is a bad or immoral person, begins to emerge as a legal concept.”

Or take environmental policy, which gained traction in Britain due to concerns about the aesthetics of the Houses of Parliament. As Hyde details, the 19th century reconstruction of Britain’s Parliament — the old one burned in 1834 — soon became derailed, in the 1840s, by concerns that its limestone was already decaying and becoming ugly.

A formal inquiry by the end of the 1850s concluded that the sulphuric “acid rain” from London’s sooty atmosphere was corroding the city’s buildings — an important step for the incorporation of science into 19th-century policymaking, and a finding that helped usher in Britain’s 1875 Public Health Act, which directly addressed such pollution.

The levers of power

“Ugliness and Judgment” has received praise from other architectural historians. Daniel M. Abramson, a professor of architecture at Boston University, calls it “a superb piece of scholarship, opening up new ways, through the lens of ugliness, to understand and connect a whole range of canonical figures, buildings, and themes.”

To be sure, as Hyde readily notes, the geographic scope of “Ugliness and Judgement” is limited to Britain, and almost exclusively on London architecture. It could well be worthwhile, he notes, to look at controversies over architecture, ugliness, and power in other settings, which might have their own distinctive elements.

Still, he notes, studying Britain alone uncovers a rich history stemming from the notion of “ugliness” by itself.

“Disagreements over questions of ugliness are much more volatile than disagreements over questions of beauty,” Hyde says. When it comes to politics and the law, he observes, “In some sense, beauty doesn’t matter as much. ... The stakes are different.” Few people try to prevent buildings from being built, he notes, if they are merely a bit less beautiful than onlookers had hoped.

“It’s a way to look for the levers of power,” Hyde says.

Financial Times reporter Lucy Watson spotlights Prof. Timothy Hyde’s book, “Ugliness and Judgement: On Architecture in the Public Eye” on a list of the best interior books to kick off the new year. Watson writes that in the book, Hyde explores “what are considered to be the ‘most vile’ buildings of the past century, and explores the societal (and aesthetic) contexts that make them so.”