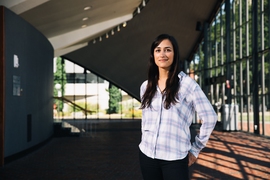 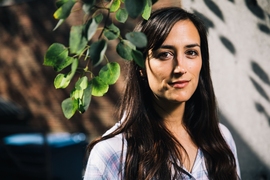 Just 30 seconds into their walk to the town center of Kitale, in Kenya, where they would later conduct a focus group about locally available solar energy options, Elise Harrington and her research partner came across a vendor selling a counterfeit solar lantern. Because they had been studying these very products, they knew immediately it was a fake. But the seller assured them it was authentic and came with a warranty.

They bought the lantern and presented it, along with a genuine version, to the members of focus groups. Few of them were able to tell the difference. It was an “eye-opening” discovery says Harrington, a doctoral student in the Department of Urban Studies and Planning who has been studying the ways that people in Kenya and India learn about solar products and make decisions about buying and maintaining them.

While consumers in developed countries generally assume that a product such as a solar panel will come with a reliable warranty — and wouldn’t purchase the product if it didn’t — Harrington has learned through her fieldwork that this type of information isn’t necessarily communicated to consumers in the countries she’s studied. So far, her research indicates that people’s social relationships, for example with friends, family members, or trusted shop owners, play a critical role in the adoption of solar products, but that gaps remain in household knowledge when it comes to the more complex ideas of standards and after-sales services.

“My research looks at not just whether solar energy products are available, but if they’re high quality and have services associated with them that will allow people to use them for a longer period of time,” Harrington says. She hopes that her findings can provide policymakers with information that will help them expand the use of clean energy while also serving communities that lack affordable, reliable electricity.

The research combines Harrington’s interests in sustainability (she’s been involved in environmental issues “forever,” she says) with her love of travel (she’s learning Swahili and Hindi in her spare time). She’s also dedicated to her local community at MIT. As a graduate resident advisor in Simmons Hall, she can be found spending time with her undergraduate residents and even brewing them butterbeer during the occasional Harry Potter-themed event.

In many parts of the world including Kenya, a variety of different products provide electricity generated by solar power. These range from the ubiquitous solar lanterns that can power an LED light or charge a cell phone, to other types of solar home systems or microgrids that each provide varying amounts of power for different types of household devices.

Advised by Associate Professor David Hsu, Harrington has studied how rural communities, first in India and now Kenya, can transition from a centralized electricity grid to these various types of home solar systems. During her recent trip to Kenya, this past summer, she fielded two surveys focusing on solar “intermediaries” who interface between end-users, companies, and policymakers.

“As adoption of solar products grows in rural areas, so does the need for energy services accessible by rural communities, and consumer protections that result in equitable and durable electricity service models,” she says.

Harrington, who majored in architecture as an undergraduate at the University of Pennsylvania, has studied solar energy in several different contexts during her time at MIT. In her first year, she focused on electricity planning for rooftop solar systems in the United States, specifically the growth of distributed solar in Hawaii. Then, as a fellow at the MIT Tata Center for Technology and Design, she investigated household decision-making on solar microgrids in rural India, looking at how communities could use these small-scale systems as alternatives to the state-sanctioned electricity grid, which is often unreliable in rural areas.

“One of the faculty members in our department said to us during our first year that if we came in doing exactly the same thing we wrote in our statement, then we have not been pushed enough. This idea really set the trajectory on the risks I was willing to take in my research,” says Harrington.

Harrington is also a recent fellow in the Martin Family Society of Fellows for Sustainability, a community at MIT dedicated to environmental sustainability. Martin fellows are selected every academic year from across the Institute’s departments. “We get the opportunity to interact with each other, learn about each other’s research, and be a part of this network of people who can learn from one another and contribute to environmental and sustainable work inside and out of MIT,” says Harrington.

A GReAt way to find community

Harrington is a graduate resident advisor (GRA) in Simmons Hall, which she describes as one of the best things about her experience at MIT. As a GRA, she acts as a resource for residents whenever they have questions, challenges, or want to talk about exciting opportunities or events in their lives.

She says being a GRA has increased the depth of her connections to the MIT community, and she appreciates that she can come back to that after a long, hard day of work and spend time with the Simmons community.

“From my perspective, so much of MIT’s entrepreneurial and creative spirit is housed in the undergraduate population here. Without being a GRA, I don’t think I would get to know that side of MIT as much,” says Harrington.

She says she learns as much from her undergraduate residents as they do from her, especially about thinking ahead and managing stress. As a GRA, she hosts a range of events for them, her favorite being the aforementioned annual Harry Potter gathering where she and her partner dress up in costumes in addition to brewing up beverages for Simmons residents.

The benefits of downtime

In her spare time, Harrington likes to stay active, physically and mentally. She takes yoga classes in Boston and says it's one of the best ways to end a difficult day. She also enjoys going for runs, walks, and hikes in the outdoors.

One of Harrington’s favorite activities is playing cards and board games with friends, which she says is a fantastic way to take her mind off of research. On the weekends, she likes to try out new games; her current favorite is Mission to Mars, which she describes as a Settlers of Catan-type board game in space, but with a bit more randomness. In general, she loves games that are accessible for everyone, so that players can just sit down with a group of people and figure out as they go.

“Games, hiking, different things that get you out, they help. I find when I take a true break like that, I can work so much better when I go back to it,” Harrington says.

Lowering emissions without breaking the bank