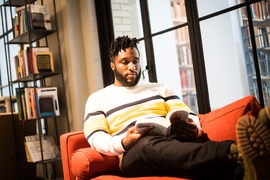 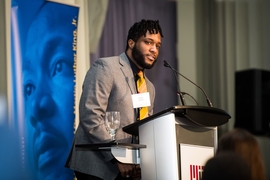 Dasjon Jordan’s classmates call him the mayor of New Orleans.

And Jordan, a second-year master’s student in the Department of Urban Studies and Planning (DUSP), has indeed brought deep NOLA roots to MIT. His family has lived in the same few city blocks, on America Street in eastern New Orleans, for generations; Jordan even attended the same neighborhood elementary school that his mother did — and that his grandmother did before her.

That all changed in 2005, when Jordan was 12 years old: His family lost their home due to flooding from Hurricane Katrina. Leaving their multigenerational urban neighborhood, his immediate family joined a vast, post-Katrina suburban migration, ultimately settling about 45 minutes outside of the city in LaPlace, Louisiana.

One of the starkest changes that Jordan recalls was the separation of commerce and community in the suburbs. Instead of locally owned corner stores providing the pulse of the neighborhood, the commercial activity was fragmented along the nearby highway, and local culture was hard to find. As the years went on, Jordan felt this loss of place more acutely with repeated visits back to his grandparents’ home. Now, nearly 15 years later, his family elementary school is a plot of grass.

Perhaps due to this uprooting, Jordan approaches urban planning with an affinity for local solutions: “We want to have place-based solutions to economic disparities and racial divisions,” he says. “There’s an importance to physical space: connecting with local environments, buildings, cultures, and hearing the stories of people in their neighborhoods.”

His early experiences also solidified his conviction that local businesses and cultural spaces provide essential context for empowering underserved communities. “There’s evidence to say that when you support small business owners, they hire locally, invest in their communities, and promote a sense of cultural identity,” he says.

Responding to the call

In October 2015, as a senior architecture student at Louisiana State University, Jordan attended the Black in Design Conference in Cambridge, Massachusetts, that first placed him on the path to MIT. “Before I got off the plane, I could feel that I was going to spend a major part of my life here,” Jordan says. “The city of Boston called to me.”

At that conference, he met DUSP alumni who encouraged him to apply to MIT, and he felt sure that urban planning was right for him. However, that spring he learned that he hadn’t been accepted into MIT — or any of the other programs he applied to.

With no confirmed job after graduating, Jordan initially thought his plans were derailed. But a month later, an MIT alum he met at the design conference connected him with another DUSP graduate who started a community development nonprofit organization in the heart of New Orleans.

The nonprofit, Broad Community Connections, and many of the business it supports stand on and around Bayou Road, the oldest road in New Orleans. Since its settlement, the area has been a trading post for Native Americans, free people of color, and local business owners. Uncovering these layers of history, culture, and place reconnected Jordan to his first home.

In his new position, Jordan was able to provide holistic support for small business owners, and he began to see what a critical nexus small businesses are for revitalizing a community: “[Small business owners] are the most engaged citizens. They’re local employers, community leaders, mentors, and culture-bearers. Their personalities and knowledge of neighborhood history give their cities distinct character. If small business owners aren’t supported, a city feels generic.”

After working for a year, Jordan reapplied to graduate school with a sharpened sense of purpose. This time, he was admitted to MIT and began his program in September 2017.

After several core classes in planning theory, microeconomics, and geographic information system mapping, DUSP students are encouraged to pursue electives in their area of interest. For Jordan, this has meant taking courses focused on economic development in urban communities, in the Comparative Media Studies program, and even a few courses at Harvard University.

Jordan’s most transformative classes, 11.437 (Financing Economic Development) and 11.360 (Community Growth and Land Use Planning), took him into Boston-area communities like Lynn and Lawrence, “gateway” cities with large immigrant populations. These areas, often former mill cities suffering from white flight and governmental disinvestment, are considered potential commercial opportunity zones, but working closely with them requires sensitivity to local history and culture. To that end, Jordan considers the primary work of a planner in community development to be partnering with those on the margins of society.

“At its core, the most important city planning questions are: Are we taking the time to observe and listen to the challenges communities are facing? Are we willing to be a bridge and make connections in spaces where we have power to? And how do we create platforms for people’s voices to be heard without being translators? The people most affected by an issue have a better understanding of how to solve it; they sometimes just need our partnership to fix it.”

For Jordan, it’s work that calls back to his nonprofit experience on Bayou Road.

His thesis will focus on how to support entrepreneurs of color in improving their businesses by leveraging their cultural authenticity, innovative marketing strategies, and curated experiences. It’s a place-based solution that Jordan believes can help to address economic disparities and social divisions.

In tandem, he has also launched a startup, Roux, awarded funding from DUSP’s startup accelerator DesignX. Roux’s digital platforms aim to connect millennials to heart of culture in cities across to country. Rather than a standard review-based system, like Yelp, the company will emphasize curated experiences that showcase the intersection of culture, community, and commerce.

Since his arrival in 2017, Jordan has found his own sense of place in Cambridge. Two classmates in particular, Hannah Diaz and Morgan Augillard, have given Jordan a feeling of connectedness here. They often dinner at Suya Joint in Dudley Square to joke and debrief after class, or go to Muqueca Restaurant for Brazilian feijoada, a bean dish that reminds him of the red beans and rice of his hometown.

Jordan, Diaz, and Augillard are also all members of DUSP’s Students of Color Committee (SCC), which provides a safe space for students of color and, critically, connects prospective students with current students and alumni during the application process through the Peer Application Support Service (PASS) program. Jordan joined SCC his first year and currently sits on its board.

That experience has given him keen perspectives on diversity initiatives at MIT.

“There’s a lot of conversation about diversity and inclusion across MIT, but many students and myself would like to see more of a focus on social justice and equity in the student experience,” Jordan says. “When I saw the MIT and Slavery Initiative, I thought it was great, like, we’re grappling with hard truths. But what’s being done to move forward on the current issues? Because the challenges experienced by the first students of color admitted to MIT are the same issues happening now. We can’t get stuck in a mentality of gradualism.”

In a complementary vein, Jordan also wants students to better understand their power in an institutional setting. “I wish students knew how powerful their individual and collective voices are,” he says. He himself has recently taken steps to actualize this idea, as a recently appointed Office of Graduate Education Fellow focusing on graduate diversity initiatives.

Jordan’s leadership is also being recognized institutionally; he was chosen as this year’s graduate speaker at MIT’s annual MLK celebration in February.

His advice to other students is to embrace MIT — and their power as students within it. “Students come here to world-leading institution — they shouldn’t forget that they come here as leaders.”