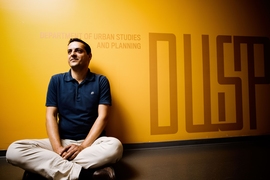 One of Babak Manouchehrifar’s favorite places in Cambridge, Massachusetts, is a city block on Prospect Street that hosts residences, a mosque, a synagogue, and a church. This is unsurprising considering that the fourth-year PhD candidate’s research centers around the relationships between urban planning, secularism, and religion.

“I’m interested in the peaceful coexistence of communities with differing views on religion and secularism through urban planning initiatives,” says Manouchehrifar, who left his home country of Iran to study at MIT’s Department of Urban Studies and Planning (DUSP). “This interest comes from my professional as well as social experiences, before and after coming to the U.S. To me, this is part of what MIT calls ‘building a better world.’”

According to Manouchehrifar, planners deal with various aspects of religion and secularism in their daily practices considerably more often than they do in their academic training. On the job, planners work with communities of differing viewpoints, such as when a host community opposes certain secular proposals or practices of different faith groups, or when a group of citizens requests religious exemption from zoning laws.

At the same time, these planners must work within the legal and political structures that authorize their work, such as the Religious Land Use and Institutionalized Person Act of 2000, which bars planners from burdening a person’s free exercise of religion.

“My research aims to spur further discussion on what I see as a practical dilemma, namely, how should planners deal with religious differences when their professional code of conduct calls for a particularly ‘indifferent’ approach,” Manouchehrifar says.

In his research, including a paper recently published in the journal “Planning Theory and Practice,” which was selected as one of the five best papers published in the field of planning in 2018, Manouchehrifar critiques the conventional view that there is a clear, simple distinction between religion and secularism in the practice of urban planning.

“My goal is to transcend the secular-religious dichotomy through the planning perspective. I aim to show that these two categories are in fact inextricably linked and deeply entangled in planning practice; they depend on each other for meaning,” he says.

Early constraints and the passion for a better world

Through his work, Manouchehrifar hopes to promote a better understanding of the religious differences of global communities away from the adversarial rhetoric of war or conflict. This hope is rooted in his childhood experiences.

Born in Iran at the brink of the Iranian Revolution and right before the Iran-Iraq War, Manouchehrifar’s childhood took place in a world in conflict. He recalls thinking war was normal because he didn’t have another frame of reference with which to compare his environment. But he and his family did imagine a different world, one in which he would run outdoors to soccer fields instead of bomb shelters.

“It was quite a difficult time, but I was part of a lucky generation because when I became a teenager, things began to be more stable,” he recalls. The war ended when Manouchehrifar was almost 10, but his wartime experience sparked his passion for contributing to a more peaceful world.

Before coming to MIT, Manouchehrifar received a bachelor’s degree in civil engineering and surveying from Isfahan University and a master’s degree in urban and regional planning from Shahid Beheshti University (SBU), both in Iran. His first job after college was as a surveying engineer in Isfahan, where he worked on a highway project that was cutting through a low-income neighborhood.

He was presented with an ethical dilemma when he was told that homes would have to be demolished and their residents be displaced in order to clear the way for the construction of the highway. When he brought his concerns to his project manager, he was told that it wasn’t his job as an engineer to worry about the social impact of the work. This led Manouchehrifar to quit his job and pursue a career in urban planning, believing that it would allow him more knowledge and power to consider the social impacts of urban projects.

After working as a planner and teaching at SBU for seven years, Manouchehrifar and his wife, Pegah, moved to Cambridge in 2013 so he could pursue a master’s degree in urban planning and international development at MIT. He completed the program in 2015 (their daughter, Danna, was also born at MIT at this time) and has since been working on his PhD. Studying in the U.S., and at the Institute in particular, has been a highly positive experience for Manouchehrifar, but it hasn’t been without its difficulties.

Manouchehrifar was halfway through his PhD when the White House imposed its travel ban in 2017. His initial research centered around the relationship between religion and planning in Iran, meaning that he had to do his fieldwork there. But Manouchehrifar was unsure as to whether or when he would be able to come back to the States and finish his studies if he left.

Although it wasn’t easy, he redirected his research project to focus on the U.S. instead. “I was rather forced to change course, but the results have also been fruitful for my research because it has enriched my understanding of the topic and given me a more nuanced comparative lens,” he says. On a personal level, the impact of the travel ban has been much harder for Manouchehrifar and his family to handle: “The disruption of research is something that we can manage one way or another. The disruption of family life, on the other hand, is quite unsettling and oftentimes paralyzing.”

Manouchehrifar says such constraints have motivated him to work harder in his studies.

“I think [these experiences] have reinforced my passion for building a better world through planning and international development initiatives. What I decided to do, following a period of contemplation and consultation especially with my advisor, Professor Bish Sanyal, was to try to transform such constraints into an intellectual energy to conduct research on a topic that is meaningful both for myself and for my field of study,” he says.

Manouchehrifar has served as an instructor for 11.005 (Introduction to International Development Planning) and has been a teaching assistant for four other courses. Sanyal says that Manouchehrifar’s students have praised him for creating “an atmosphere where everyone could get their thoughts out and learn, and be challenged by each other.”

When he isn’t working, Manouchehrifar spends as much time as he can with his wife and daughter. The family particularly enjoys going to parks and museums together. Manouchehrifar says he is grateful for everything his family has done for him: “I couldn’t have done my studies without their support and sacrifices, and it is really like the entire family is a getting a PhD.”