Ensuring that students and scholars from around the globe can continue to enter the US is vital to universities’ missions, brief argues.
MIT News Office
Publication Date:
Press Inquiries 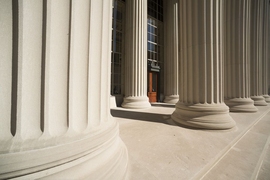 MIT and 30 other colleges and universities today filed an amicus brief in the federal appeals court for the Fourth Circuit, arguing that President Trump’s latest executive order, like its predecessor, threatens the universities’ ability to fulfill their educational missions by attracting the most talented individuals from around the world.

The executive order issued by the president on March 6, suspends citizens of six Muslim-majority countries — Iran, Libya, Somalia, Sudan, Syria, and Yemen — from entering the U.S. for a period of 90 days. Although the order excludes certain visa-holders, it would bar entry of individuals who seek the categories of visas most commonly relied upon by the universities’ international students, faculty, staff, and scholars.

In their amicus brief, the universities describe how the executive order inflicts significant burdens on their students, faculty, and scholars; impedes the universities’ ability to fulfill their educational missions; and will result in harm to the U.S. economy if American universities cannot attract the best talent to their campuses to study and work.

The brief also argues that the executive order will impede successful academic collaboration in the United States, and that it undercuts efforts to foster a culture of diversity, inclusion, and tolerance, by signaling, from the highest levels of government, that discrimination is not only acceptable but appropriate.

“Amici [the universities] are experiencing the Order’s costs absent any evidence that all or even an appreciable number of nationals from these six countries — all of whom already undergo significant vetting by the government before being permitted to study or work here — pose any threat to the safety or security of the United States or amici’s campuses,” the brief states.