Universities argue that the ability to welcome students and scholars from all countries is critical to their educational missions.
MIT News Office
Publication Date:
Press Inquiries 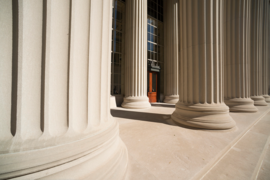 MIT and 16 other institutions filed an amicus brief Monday with the federal court in the Eastern District of New York, in Darweesh, et al. v. Donald Trump. In their brief, the universities express their concerns about the impact of the president’s executive order restricting citizens of seven Middle Eastern countries from entering the U.S.

The Jan. 27 executive order barred citizens of Iran, Iraq, Libya, Somalia, Sudan, Syria, and Yemen. The Darweesh v. Trump lawsuit is one of several legal challenges to the executive order; it was initially filed on behalf of two Iraqis who were detained at New York’s John F. Kennedy International Airport after the order had been issued.

In their “friend of the court” brief, the universities describe how the executive order inflicts significant burdens on their students, faculty, and scholars; impedes the universities’ ability to fulfill their educational missions; and will result in harm to the U.S. economy if American universities cannot attract the best talent to their campuses to study and work.

MIT President L. Rafael Reif shared his perspective on the importance of international students and scholars to the Institute’s mission in a Jan. 30 letter to the MIT community. “Like the United States, and thanks to the United States, MIT gains tremendous strength by being a magnet for talent from around the world,” he wrote. “More than 40 percent of our faculty, 40 percent of our graduate students, and 10 percent of our undergraduates are international. ... Together, through teaching, research, and innovation, MIT’s magnificently global, absolutely American community pursues its mission of service to the nation and the world.”

Each of the 17 universities filing the brief is home to a large number of international students and scholars, who contribute critically to their communities. “This diversity promotes the free exchange of ideas, encouraging individuals to consider issues from different perspectives, and giving students and faculty a greater understanding of our global, pluralistic society,” the brief states.

International students and scholars also benefit the U.S. and the world more generally, the brief describes. It cites one estimate that international students directly contributed $32.8 billion to the U.S. economy and supported or contributed to the creation of 400,000 American jobs in the 2015-2016 academic year. The brief goes on to point out that since 2000, 40 percent of all American Nobel Prize winners in chemistry, medicine, and physics have been immigrants. Many international students and scholars also put their knowledge to use for the benefit of their home countries and the world, the universities explain.

The universities acknowledge the importance of ensuring the safety and security of the United States. However, the brief argues, the broad executive order harms students, faculty, scholars, and universities who have already been through a comprehensive vetting to obtain visas. “By prohibiting persons from freely traveling to and from this country, the Executive Order divides students and their families, impairs the ability of American universities to draw the finest international talent, and inhibits the free exchange of ideas,” the brief states. These effects are already being felt as individuals abroad reconsider coming to the universities to work and study, and others currently in the U.S. cancel trips to international conferences and other events.

This brief built on another amicus brief filed by MIT and seven other Massachusetts universities in federal court in Boston on Feb. 3, in a similar lawsuit concerning the executive order.