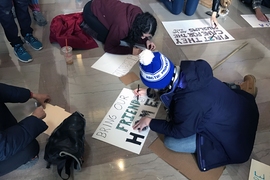 Since Friday afternoon, the MIT administration has been working to respond to an executive order signed by U.S. President Donald Trump barring citizens of Iran, Iraq, Libya, Somalia, Sudan, Syria, and Yemen from entering the United States.

“We continue to push hard to bring back to MIT those members of our community, including two undergraduates, who were barred from the U.S. because of the January 27 Executive Order on immigration,” MIT President L. Rafael Reif wrote this afternoon in an email to the MIT community. “We are working personally with each of the affected individuals we are aware of.”

Starting on Friday, Chancellor Cynthia Barnhart and leadership from the International Students Office and the International Scholars Office reached out to members of the MIT community who might be directly affected by the executive order. Those efforts revealed that there are students, faculty, and international scholars who are out of the country and trying to return to campus.

The situation changed in the wee hours of Sunday morning, with a temporary order issued by the Massachusetts federal district court restraining the government from, solely on the basis of the executive order, detaining or removing holders of a valid visa or green card who travel from the seven countries to the U.S. through Logan Airport.

Around noon on Sunday, MIT leadership emailed the MIT community strongly advising all Institute students, faculty, staff, and visiting researchers who are citizens of the seven affected nations to return to the U.S. as soon as possible, and no later than Saturday, Feb. 4, when the court order expires.

“Get back as quickly as you can,” advises Barnhart. “This is a very fluid situation, and we encourage all members of the MIT community subject to the executive order to fly directly to Logan Airport.” Affected travelers are being given legal and general support from MIT.

On Sunday, Jan. 29 MIT students, faculty, and staff gathered to support members of the Institute community who are directly affected by President Trump’s Executive Order barring citizens of seven countries from entering the United States. Once organized, the group marched to join the larger protest in Copley Square, Boston.

The Sunday letter to the community also invited MIT students, faculty, and staff to gather in Lobby 7 for a student-organized event at noon.

“It is with deep concern that I am, as many are, watching the news of President Trump’s executive order preventing nationals of certain countries from entering the United States,” Krishna Rajagopal, the William A. M. Burden Professor of Physics and chair of the MIT faculty, wrote in his own email inviting faculty to the gathering. “We are a global institution; the ability of some MIT students, scholars, staff and faculty to travel has just been curtailed in a sharp and uncertain manner. We are one community; this affects us all.”

“My father was an immigrant who came to the U.S. to study at MIT,” says Davi da Silva, an MIT graduate student and an organizer of the gathering. “I have many friends and classmates from the nations on Trump’s list. Having people from all over the world working together is a feature of American science, not a bug. I feel that not just intellectually, but deeply personally.

“From here,” he continued, “students need to stay engaged. We’re working to help students learn about issues, advocate to their elected officials, and vote in upcoming elections.”

Hundreds of members of the community attended the event. Students, faculty, and staff were joined by Institute leaders including Provost Martin Schmidt and Barnhart, who addressed those gathered.

Members of the group then walked across the Massachusetts Avenue bridge together to attend a larger rally at Copley Square in Boston, where speakers included U.S. Sen. Elizabeth Warren and Boston Mayor Marty Walsh.

MIT officials are working intensively with the affected students, faculty, and international scholars.

The Institute is also considering how it might assist students from these nations who have been offered admission to the Class of 2021.

Additionally, there were five exchange or visiting students at MIT last semester hailing from Iran, along with one from Yemen.

MIT’s international students, postdocs, and researchers can contact the International Students Office and the International Scholars Office for immediate assistance. Members of the MIT community with legal questions about this situation can contact the Office of the General Counsel. All of these offices stand ready to provide direction and assistance to members of the MIT community who are in need of help.

In his letter to the MIT community today with his thoughts on the executive order and its meaning, President Reif called the order “a stunning violation of our deepest American values, the values of a nation of immigrants: fairness, equality, openness, generosity, courage.” About the many people from MIT who rallied on Sunday in opposition to the order, Reif wrote, “As an immigrant and the child of refugees, I join them, with deep feeling, in believing that the policies announced Friday tear at the very fabric of our society.”

Reif also wrote of the need for national unity — and for MIT to play a part in its realization:

“I would like us to think seriously about the fact that both within the MIT community and the nation at large, there are people of goodwill who see the measures in the Executive Order as a reasonable path to make the country safer,” he wrote. “We would all like our nation to be safe. I am convinced that the Executive Order will make us less safe. Yet all of us, across the spectrum of opinion, are Americans.

“In this heated moment, I urge every one of us to avoid with all our might the forces that are driving America into two camps. If we love America, and if we believe in America, we cannot allow those divisions to grow worse. We need to imagine a shared future together, if we hope to have one. I am certain our community can help work on this great problem, too, by starting right here at home.”