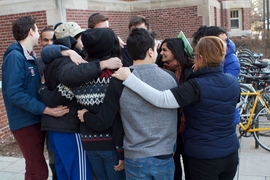 Caption:
Friends of one of the two MIT undergraduates initially denied re-entry to the United States offered a warm welcome on Friday.
Credits:
Photo: Melanie Gonick/MIT

Caption:
A roommate of one of the two MIT undergraduates initially denied re-entry to the United States, along with MIT officials, awaited the student's arrival at Logan Airport in Boston on Friday afternoon.
Credits:
Photo: Melanie Gonick/MIT

This article was updated on Sunday, Feb. 5, 2017, following the return of all affected members of the MIT community to the United States.

Two MIT undergraduates who were denied re-entry to the United States last weekend landed at Logan Airport on Friday afternoon.

The undergraduates are now back on campus. Both were prevented from boarding flights back to Boston last weekend after spending the winter break with their families.

Two MIT researchers and a visiting student have also returned to the U.S. since Friday. With their arrival, no members of the MIT community are known to remain stuck abroad following President Trump's Jan. 27 executive order restricting citizens of Iran, Iraq, Libya, Somalia, Sudan, Syria, and Yemen from entering the U.S.

“We can all be glad that our affected undergraduates have overcome their immediate immigration difficulties and are back with us,” MIT President L. Rafael Reif wrote Friday in an email to the MIT community. “I am proud that the community has stood behind them and reached out to help. If they and others confront such challenges in the future, you can be sure MIT will be by their side.”

Beyond the five members of the MIT community who have now returned, MIT is aware of eight other researchers from the affected nations who had received offers to come to MIT, but who now cannot enter the U.S.

The MIT affiliates’ return to the U.S. was made possible by a temporary order issued by the Massachusetts federal district court last weekend, restraining the government from enforcing the executive order to detain holders of valid visas or green cards who travel from the seven affected countries to the U.S. through Logan Airport.

On Thursday, an airline announced that it would begin allowing passengers affected by the executive order to board international flights bound for Logan. MIT officials moved quickly to get the affected members of the MIT community — with whom they had been in regular touch — onto this airline’s flights back to Boston.

“After a week of round-the-clock work pursuing every avenue to bring our students home, we are very pleased to be able to welcome them back to MIT,” Chancellor Cynthia Barnhart said on Friday. “This is a direct result of their positivity, tenacity, and resilience, as well as the tireless efforts of scores of my colleagues. While we celebrate this moment, we are also fully aware that more must be done to understand the executive order’s full impact on our community. That work will continue in earnest, as we seek to ensure that MIT remains open and accessible to talent from anywhere in the world.”

More than 100 at MIT directly impacted

While no members of the MIT community are believed to remain stuck abroad, more than 100 students and researchers from the seven affected nations are now on campus; their immigration status is unclear in the wake of the executive order.

Over the past week, officials have pursued various approaches on behalf of all of MIT’s affected students and researchers. The Institute’s governmental affairs teams in Cambridge and Washington have advocated with relevant federal agencies on their behalf; enlisted help from the Massachusetts congressional delegation; and pursued exemptions to the executive order for the stranded students and scholars. MIT connected those stuck abroad with legal and travel resources and engaged its global alumni network to amplify calls for their return.

On Friday, MIT joined seven other Massachusetts universities to submit an amicus brief to the federal court in Boston. The brief was filed in support of a lawsuit asking the court to order the U.S. government to stop enforcement of the executive order.

In the submission, MIT and the other universities sought to educate the court about the vital role that international faculty, scholars, and students play in our communities, as well as the importance of their contributions to the nation and the world. The universities — MIT, Boston College, Boston University, Brandeis University, Harvard University, Northeastern University, Tufts University, and Worcester Polytechnic Institute — also described the serious consequences that the executive order has had and will continue to have not only on members of their communities, but on the nation as a whole.