Looking under the surface of politics in Latin America 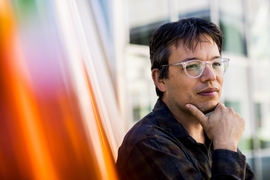 Danny Hidalgo’s research involves looking under the surface of elections and political campaigns, and probing some of their questionable elements. It turns out there’s a lot to see down there.

Hidalgo, an associate professor in MIT’s Department of Political Science, is a scholar who studies the nexus of elections, campaigns, and money in Latin America, and particularly in Brazil, hammering away at the question of who, exactly, benefits from the system.

Consider one Hidalgo study of municipal elections that were plagued by the alleged practice of “voter buying,” in which people would be brought into a city to vote illegally. Voter audits that discouraged voter buying, Hidalgo has found, shrank the electorate by 12 percentage points and lowered the chances of mayoral reelection by a whopping 18 percentage points.

Even when the rules are being followed, the influence of money in politics is evident. In another study, Hidalgo showed that firms focused on public-works projects, which donate to winning candidates from the ruling party, get a boost to their government contracts that is at least 14 times the value of their contributions.

A lot of Hidalgo’s studies focus on elections themselves. In still another study, Hidalgo and a co-author showed that local politicians who were incumbents were twice as likely as nonincumbents to be granted control over community radio stations; in turn, they also showed that radio access significantly boosts the vote share of politicians.

“Corruption and accountability are central themes of politics in Brazil,” Hidalgo says, sitting in his office, discussing his work. “Let’s try to think rigorously and bring our social science tools to bear on them.”

That rigorous thinking, as well as the exacting quantitative methods Hidalgo uses, are built on a foundation of firsthand knowledge. There is nothing like living somewhere, and learning about it in person, to spur productive research.

“I’m very much of the mind, and maybe this is more old-school, of having research questions come to you based on what’s important in the places that you’re studying,” Hidalgo says. “In some sense, you just have to spend a lot of time in Latin America.”

Indeed, many of Hidalgo’s research interests have been formed by his sense of place.

Hidalgo was born in Mexico but grew up in Los Angeles, with parents who were highly attuned to Mexican politics. During Hidalgo’s teenage years, in the 1990s, the country’s lurching transition toward a multiparty democracy was a major talking point in his household.

“Around my kitchen table there was a lot of discussion of Mexican politics, and what was going on, and that got me interested in politics in other countries, and how politics works in places where the institutions aren’t quite as strong as in the U.S.,” Hidalgo recounts. “So because of that I had an interest in Latin American politics generally.”

Hidalgo went to college at Princeton University, where he graduated with a BA in politics in 2002. His focus on Latin American politics was enhanced by an undergraduate study abroad program that landed him in Buenos Aires.

“Basically I lived there in the lead-up to the enormous depression that occurred in Argentina, before this period when they had four or five presidents in a matter of months,” Hidalgo says. “That was a very interesting time to be living in Buenos Aires.”

After graduation, though, Hidalgo departed for a different part of the world: Hangzhou, China, where he taught English while figuring out his future. Again a social crisis hit soon after Hidalgo’s arrival, this time in the form of the SARS epidemic that shut down cities and scared off travelers.

“From one day to the next, Hangzhou went from having incredibly bustling streets, to nothing,” Hidalgo remembers. And when an acquaintance of a friend contracted SARS, Hidalgo reluctantly departed. “The program that I was with essentially said, ‘You have to be under quarantine for a while, or you have to leave,’ which was too bad, because I really liked living in China and I wanted to stay.”

At loose ends back in the U.S., Hidalgo applied for a Fulbright scholarship to study in Brazil, got it, and spent his first year in Brazil doing research.

“I loved my time in Brazil. I was fascinated. It was so huge and with so much heterogeneity,” Hidalgo says. “A lot of my work stems from that.”

Hidalgo adds: “In China there’s been incredible economic development, but a complete lack of accountability. … In Brazil in some sense [it’s been] the opposite, with a long period of sluggish growth, from the late 1970s to mid-90s, but increasingly it became this vibrant democracy, very competitive. It had a traditional oligarchical conservative political class, but there emerged a working-class president [Luiz Inacio Lula da Silva, from 2003 through 2010] from a left-wing party, which typically didn’t reach political power in Latin America. It was a fascinating contrast.”

Brazilian politics have since changed, rather dramatically, but Hidalgo’s interest had been sparked. Back in the U.S. again, Hidalgo attended graduate school in political science at the University of California at Berkeley, earning his PhD in 2012. He was hired out of graduate school by MIT and has been on the Institute faculty since then, embarking on many research trips in the intervening years. For his work, Hidalgo received tenure from MIT earlier this year.

While Hidalgo’s work is clearly situated at the junction of money, politics, and power, he uses a diversity of methods to get his results. He isn’t necessarily trying to build an overarching theory of how politics works; rather, he has identified an array of ways that money and politics interact.

“Some scholars have a theory first and look for cases,” Hidalgo says. “I care about societies and politics and try to find out what’s important. There’s an interplay between theory and cases, but I’m more case-driven.”

Hidalgo is also not set on studying Brazil to the exclusion of other countries. In fact, at the moment has embarked on a study of transparency in local U.S. governments. The study uses search technology to see how much government information is available online for residents of towns and cities in the U.S.

“In some ways the availability of basic information about the government is actually better in some parts of Latin America,” Hidalgo says, referring to the notorious case of Bell, California — a small town where in 2010 a reporter for the Los Angeles Times discovered that the city manager had a million-dollar salary. There was no local paper, however, which might have caught the inflated salaries of local officials sooner.

“The death of local media is just incredibly salient, and these are the kinds of people who care about this stuff,” Hidalgo says. “I don’t think transparency is always a salient issue for citizens. It’s really often external pressure from journalists that makes [discoveries]. I think it’s just important for information about the basic operations of government.”

All the more reason, then, for scholars like Hidalgo to look at money in politics as well.