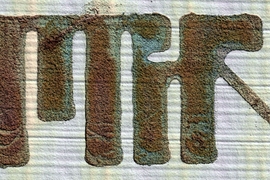 ↓ Download Image
Caption: MIT researchers have 3-D printed ultrathin ceramic films that convert energy from one form into another for flexible electronics and biosensors. Here, they’ve printed the piezoelectric films into a pattern spelling out “MIT.”
Credits: Courtesy of the researchers 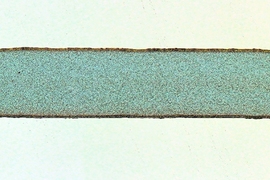 ↓ Download Image
Caption: MIT researchers have 3-D printed ultrathin ceramic films that convert energy from one form into another for flexible electronics and biosensors. The process involves printing long, narrow lines of “piezoelectric” feedstock (pictured) on a substrate, overlapping the lines, and drying them out at room temperature.
Credits: Courtesy of the researchers

Caption:
MIT researchers have 3-D printed ultrathin ceramic films that convert energy from one form into another for flexible electronics and biosensors. Here, they’ve printed the piezoelectric films into a pattern spelling out “MIT.”
Credits:
Courtesy of the researchers

Caption:
MIT researchers have 3-D printed ultrathin ceramic films that convert energy from one form into another for flexible electronics and biosensors. The process involves printing long, narrow lines of “piezoelectric” feedstock (pictured) on a substrate, overlapping the lines, and drying them out at room temperature.
Credits:
Courtesy of the researchers

MIT researchers have developed a simple, low-cost method to 3-D print ultrathin films with high-performing “piezoelectric” properties, which could be used for components in flexible electronics or highly sensitive biosensors.

Piezoelectric materials produce a voltage in response to physical strain, and they respond to a voltage by physically deforming. They’re commonly used for transducers, which convert energy of one form into another. Robotic actuators, for instance, use piezoelectric materials to move joints and parts in response to an electrical signal. And various sensors use the materials to convert changes in pressure, temperature, force, and other physical stimuli, into a measurable electrical signal.

Researchers have been trying for years to develop piezoelectric ultrathin films that can be used as energy harvesters, sensitive pressure sensors for touch screens, and other components in flexible electronics. The films could also be used as tiny biosensors that are sensitive enough to detect the presence of molecules that are biomarkers for certain diseases and conditions.

The material of choice for those applications is often a type of ceramic with a crystal structure that resonates at high frequencies due to its extreme thinness. (Higher frequencies basically translate to faster speeds and higher sensitivity.) But, with traditional fabrication techniques, creating ceramic ultrathin films is a complex and expensive process.

In a paper recently published in the journal Applied Materials and Interfaces, the MIT researchers describe a way to 3-D print ceramic transducers about 100 nanometers thin by adapting an additive manufacturing technique for the process that builds objects layer by layer, at room temperature. The films can be printed in flexible substrates with no loss in performance, and can resonate at around 5 gigahertz, which is high enough for high-performance biosensors.

“Making transducing components is at the heart of the technological revolution,” says Luis Fernando Velásquez-García, a researcher in the Microsystems Technology Laboratories (MTL) in the Department of Electrical Engineering and Computer Science. “Until now, it’s been thought 3-D-printed transducing materials will have poor performances. But we’ve developed an additive fabrication method for piezoelectric transducers at room temperature, and the materials oscillate at gigahertz-level frequencies, which is orders of magnitude higher than anything previously fabricated through 3-D printing.”

Joining Velásquez-García on the paper is first author Brenda García-Farrera of MTL and the Monterrey Institute of Technology and Higher Education in Mexico.

Ceramic piezoelectric thin films, made of aluminum nitride or zinc oxide, can be fabricated through physical vapor deposition and chemical vapor deposition. But those processes must be completed in sterile clean rooms, under high temperature and high vacuum conditions. That can be a time-consuming, expensive process.

There are lower-cost 3-D-printed piezoelectric thin films available. But those are fabricated with polymers, which must be “poled”— meaning they must be given piezoelectric properties after they’re printed. Moreover, those materials usually end up tens of microns thick and thus can’t be made into ultrathin films capable of high-frequency actuation.

The researchers’ system adapts an additive fabrication technique, called near-field electrohydrodynamic deposition (NFEHD), which uses high electric fields to eject a liquid jet through a nozzle to print an ultrathin film. Until now, the technique has not been used to print films with piezoelectric properties.

The researchers’ liquid feedstock — raw material used in 3-D printing — contains zinc oxide nanoparticles mixed with some inert solvents, which forms into a piezoelectric material when printed onto a substrate and dried. The feedstock is fed through a hollow needle in a 3-D printer. As it prints, the researchers apply a specific bias voltage to the tip of the needle and control the flow rate, causing the meniscus — the curve seen at the top of a liquid — to form into a cone shape that ejects a fine jet from its tip.

The jet is naturally inclined to break into droplets. But when the researchers bring the tip of the needle close to the substrate — about a millimeter — the jet doesn’t break apart. That process prints long, narrow lines on a substrate. They then overlap the lines and dry them at about 76 degrees Fahrenheit, hanging upside down.

Printing the film precisely that way creates an ultrathin film of crystal structure with piezoelectric properties that resonates at about 5 gigahertz. “If anything of that process is missing, it doesn’t work,” Velásquez-García says.

Using microscopy techniques, the team was able to prove that the films have a much stronger piezoelectric response — meaning the measurable signal it emits — than films made through traditional bulk fabrication methods. Those methods don’t really control the film’s piezoelectric axis direction, which determines the material’s response. “That was a little surprising,” Velásquez-García says. “In those bulk materials, they may have inefficiencies in the structure that affect performance. But when you can manipulate materials at the nanoscale, you get a stronger piezoelectric response.”

“This very nice body of work demonstrates the feasibility of preparing functional piezoelectric films using 3-D printing techniques,” says Mark Allen, a professor specializing in microfabrication, nanotechnology, and microelectromechanical systems at the University of Pennsylvania. “Exploitation of this fabrication technique can lead to complex, three-dimensional, and low temperature fabrication of piezoelectric structures. I expect we will see new classes of microscale sensors, actuators, and resonators enabled by this exciting fabrication technology."

Because the piezoelectric ultrathin films are 3-D printed and resonate at very high frequencies, they can be leveraged to fabricate low-cost, highly sensitive sensors. The researchers are currently working with colleagues in Monterrey Tec as part of a collaborative program in nanoscience and nanotechnology, to make piezoelectric biosensors to detect biomarkers for certain diseases and conditions.

The researchers are also developing a sensor to measure the decay of electrodes in fuel cells. That would function similarly to the biosensor, but the shifts in frequency would correlate to the degradation of a certain alloy in the electrodes. “We’re making sensors that can diagnose the health of fuel cells, to see if they need to be replaced,” Velásquez-García says. “If you assess the health of these systems in real time, you can make decisions about when to replace them, before something serious happens.”