Environmental regulation in a polarized culture 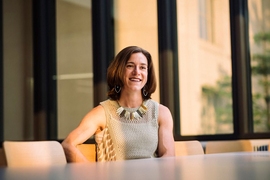 ↓ Download Image
Caption: Bergquist was attracted to MIT for her doctoral studies because it integrated the study of environmental problems with urban studies, but also placed a strong emphasis on political science.
Credits: Image: Ian MacLellan 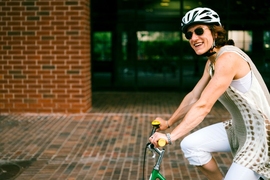 ↓ Download Image
Caption: Bergquist was attracted to MIT for her doctoral studies because it integrated the study of environmental problems with urban studies, but also placed a strong emphasis on political science.

Caption:
Bergquist was attracted to MIT for her doctoral studies because it integrated the study of environmental problems with urban studies, but also placed a strong emphasis on political science.
Credits:
Image: Ian MacLellan

With an affinity for environmental issues and a knack for analysis, MIT doctoral student Parrish Bergquist aims to clarify the ways in which changing political landscapes influence environmental policy outcomes.

Bergquist’s path to doctoral research in the departments of Political Science and Urban Studies and Planning began well before she joined MIT. After graduating from the University of Virginia with a degree in American studies and English, the Birmingham, Alabama, native volunteered for two years with the U.S. Peace Corps in Honduras to study international development and policy. There, she gained a firsthand perspective on the impacts of global climate change.

“People in Honduras lived so much closer to environmental damage than we do in the U.S.,” Bergquist says. “Carbon emissions from developed countries were already starting to have an effect on [climate in that region]. ... It affects everybody.” During conversations with women and children, Bergquist learned that those who were tasked with fetching water had to walk even further with each trip to find clean water sources.

“I was struck by the extent to which industrialization had caused problems that we in the United States have buffers against feeling every single day,” she says. Her experiences inspired her to pursue a career in environmental policy, which led her to earn a master’s degree in urban planning and environmental policy from the University of Michigan. “While I was there, I decided that research was what I was really excited about,” Bergquist says; her next move was to pursue a PhD. She hopes to “gain some traction on understanding the politics behind how environmental policy decisions are made.”

Bergquist was attracted to MIT for her doctoral studies because the Department of Urban Studies and Planning integrated the study of environmental problems with urban studies, and because of the Institute’s strong political science department. “My degree is interdepartmental,” Bergquist says. “I knew when I came in that I wanted to study politics and decision making, so I knew I wanted a school that had strong political science and planning departments.”

For her dissertation, Bergquist studies the implications of political polarization on environmental politics in the United States. To do this, she uses a mixed-methods approach to examine different federal- and state-level policies.

“One paper looks at whether or not elected officials from the different parties influence the way that environmental agencies enforce federal environmental laws like the Clean Air Act," Bergquist says. She examines other laws as well, such as the Clean Water Act, and the Resource Conservation and Recovery Act, through a similar lens.

She also studies how environmental public opinions change on the state level over time, and whether they have an impact on actual policy decisions. To guide her research, Bergquist starts with a question: “Do legislators from different states vote in favor of environmental legislation based on what their constituents think?”

Today’s increasing political polarization introduces not only a new challenge, but another set of questions for Bergquist's research.

“Scholars have argued that economic factors are more important than political parties and ideology in terms of shaping what states are doing for the environment,” Bergquist says. “But increasingly, every issue is really polarized across the parties — so are there places that are not as polarized for the environment now, and if so, why?”

“The readings we did were really great, and it was a chance to think through big ideas, like how politics is structured, how politics and the economy interact, and the way that political systems develop over time,” Bergquist says. “The course really shaped the way I think about my research.”

Mentorship has also been crucial to Bergquist’s development as a scholar. “I’m grateful to have had the opportunity to take courses, teach, and collaborate with some fantastic faculty members,” she notes. Describing her work with Chris Warshaw, one of her advisors, she says: “Collaborating with Chris on a research project has been a ton of fun. Also working with him on revising, submitting, and responding to reviews on our paper has been incredibly instructive.”

“When I started at MIT, I did not expect to be living in an undergraduate dorm again. But this will be my fifth year doing it,” she says with a laugh. “It's just a really awesome community, and it's been a great way for me to feel like so much more a part of the MIT community than I otherwise would have.”

Through her GRT program, Bergquist plans frequent events for her undergraduate cohorts to foster community and lend support. “I do try to make sure that [undergraduates] feel like I'm approachable and that they could come to me if they have something going on that they need to talk about,” she says.

“I just love everything about it. I love the job and getting to know the students,” Bergquist says.

When she's not at her desk or in the dorm, Bergquist is usually exploring the environment in yet another way, by spending time outside, running, climbing, or biking.

In the future, Bergquist hopes to continue her pursuit of academia by becoming a professor and continuing research. “I had always thought about teaching,” Bergquist says. “Part of the reason I majored in English was because I loved my English teacher in high school.”

Bergquist says that her educational journey was strongly shaped by her teachers and professors, who eventually led her to political science and planning. “Discovering those disciplines was very important to my decision to pursue an academic career,” she explains.

Bergquist’s ultimate goal involves a combination of scholarship, teaching, relationship-building, and the outdoors.

“I would love to get an academic job where I get to do impactful research with great colleagues and teach fantastic students,” she says. “But I recharge and refresh by spending time with people and staying active. My work is better and I’m happier when I have time to spend with the people that I care about and pursue the activities that I love to do. That’s the dream.”

An academic journey through solidarity and separatism